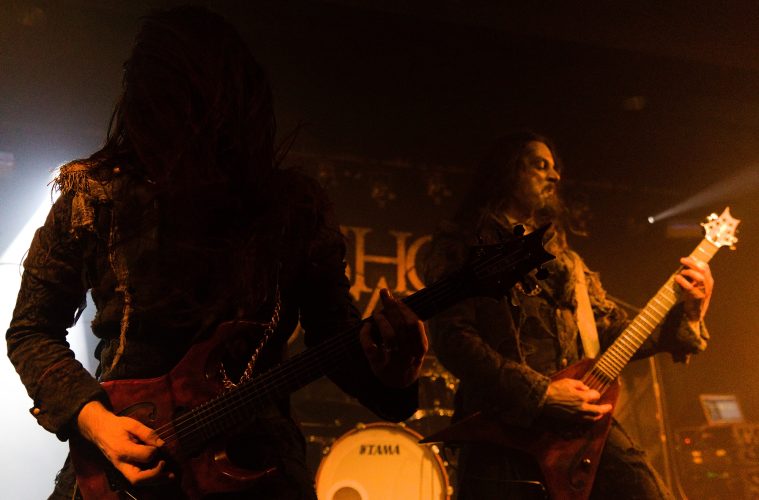 Well, if it isn’t Soundworks touring coming through with another amazing tour. Seriously, is anyone else experiencing excellent tour fatigue? I mean, not a week goes by without the announcement of some amazing tour. Companies like Your Mate Touring, Overdrive Touring and of course the aforementioned Soundworks are bringing them over in droves.

Anyway, Sunday was Sydney’s turn to see the Italian masterclass in extreme metal that is Fleshgod Apocalypse.

Opening proceedings this evening are relative newcomers; Adelaide’s Freedom of Fear. By the look of it most of the crowd weren’t familiar with the band. By the time they hammered out their newest single, “Purgatorium”, the punters were entranced by the bands’ ability to meld melodic death metal with heavy-as-fuckery dissonance.

Sitting comfortably on the same shelf as bands like The Black Dahlia Murder and Rivers of Nihil, Freedom of Dear seemlelsy injeceds progressive thrashing into epic, crushing death metal akin to Death’s The Sound of Perseverance; especially in older track “Amorphous”.

Often the problems with melodic tech death is the sound loses a lot of soul. This five-piece prove that you can be technical and still be full of grit and emotion. Vocalist Jade Monserrat was a menacing, demon-conjuring presence, prowling the stage like a possessed instrument of death. She easily intersected between the twin lead guitar attack of Corey Davis and Matt Walter, who were effortlessly melodic and catchy with their lead runs.

FOF had very little let up, keeping the intensity at 11 for their entire short thirty minute set, except for the incredibly brilliant melodic bridge of “The Consciousness of Misery”. Outstanding.

And what a shock the crowd received when the intro sample track came in at the same decibel level of a Boeing 747.

“Welcome to the Apocalypse” proclaimed vocalist Nic Webb, who was an absolute powerhouse, flawlessly acrobatting between guttural rumblings and high shrieked howls. A menacing figure upon the stage, he called out to the crowd “It’s a number for the ladies, it’s called “Clit Splitter””.

Ravishing the now packed Crowbar, Alchemy gifted us a brand new untitled track they’d been working on for the night especially. By fuck were we lucky. The track showcased Alchemy’s ability to incorporate neck-snapping speed with putrid low end slow death metal.

The band ended their set with another track from their EP (Infinite Forms of Torture) called “Nocturnal Forest”. It focused on a more melodic death metal attack with guitarist Chris Puglia showcasing his shredding chops.

The crowd swelled with anticipation as the red curtain of Crowbar’s stage was drawn back and the collective members of Fleshgod Apocalypse graced the stage. Adorned in their dead Italian soldiers garb and corpse paint, the band looked as evil as they sound.

Opening their set with mammoth tome “The Violation” from 2011’s monumental Agony, the band wasted no time showing the Australian crowd why they were here; to show off their disgustingly precise, crushingly brutal and operatically-tinged death metal.

Now, it had been over nine years since this reviewer had seen the Italian powerhouse, having last seen them on 30/03/10 at the London Underworld with Suffocation, Annotations of an Autopsy, Nervecell and Burning the Masses. Since then FGA have released some of the most breathtaking extreme metal albums in the world, such as this year’s Veleno.

Having lost one of their co-founders in previous singer/guitarist Christiano Trionfera after their last record (2016’s King), lesser bands would have taken a step back or even folded. Fortunately co-founder and primary song composer/guitarist/singer (and ex-drummer) Francesco Paoli stepped forward without missing a step. Showing their forward motion and dedication to their art, FGA loaded their setlist heavily with material from their newest album Veleno, including “Worship and Forget”, “Fury” and the absolutely blistering “Sugar”.

Other than some technical issues with feedback from Francesco Paoli’s microphone, the bands’ performance was sickeningly flawless. With six incredibly talented members on stage, the FGA’s sound enveloped the entirety of the room with gut punching blasts from drummer David Follchitto, symphonious crescendos from Frencesco Ferrini and operatic vocal flourishes from the incredible Veronica Bordacchini. This added to the spice of the vicious death metal attack of guitarist Fabio Bartoletti, bass player/clean vocalist Paolo Rossi, and of course the aforementioned Francesco Paoli. Fleshgod round out their set with a peppering of tracks from their albums Agony, Labyrinth and King, closing out with the devastating “The Egoism”, “The Forsaking” and epic encore “Syphilis”.

Fleshgod know that they’re on the brink of becoming one of the biggest extreme metal bands in the world. Sydney’s crowd were lucky to see them in such an intimate setting before their inevitable rise to the next level. The band are entertaining, tight and visibly thankful to the devoted fan base they have before them. Hopefully they’ll remember us when they rise to the top.