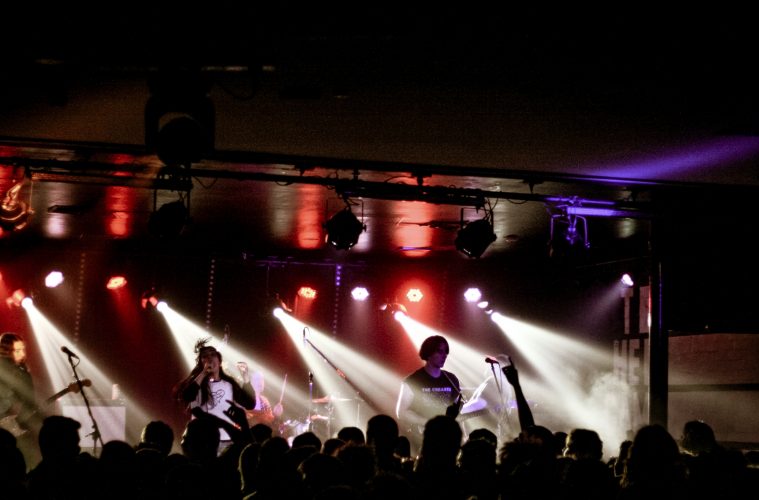 There’s nothing quite like walking into a gig and knowing it’s going to be an incredible one.

WAAX are an Alternative Rock/Punk band from Brisbane. I’d almost describe their sound as Hole meets old school Paramore with large grunge influence. When I say there’s nothing like them in all of Australia, let alone all of the world in 2019, I’m not lying. With their chaotic energy and immense stage presence they transform every room into an incredible musical experience.

From the moment of the gig announcement I knew it would be a special one; the release day of Big Grief, WAAX’s debut album (which we’ve all been waiting for for way too long). As I approached the main room of the Cambridge Hotel in Newcastle, I wondered whether Maz (Vocals) would be more reserved based on events that occurred the last time I saw the band, or whether she would give the show everything she had. With a new guitarist added to the lineup, a show cancellation due to Maz’s vocal health and Tom Bloomfield not drumming for the night due to an eye injury, I desperately hoped for the best.

It’s safe to say that I wasn’t disappointed in the slightest.

The show began with Sweater Curse; a Brisbane-based band that I can only describe as dream pop meets indie rock. Due to a few technical and sound issues they started off the with a bit of a rocky start. However, their confidence grew throughout. The audience seemed to enjoy the three-piece playing a mix of new songs and old classics, singing along to their favourites as the set progressed. Sweater Curse’s succinct nature was only lacking in the area of stage presence, with guitarist Chris carrying the band in that aspect. However, for what Monica (vocals + bass) lacked in stage presence, she made up for in flawless vocals.

As Sweater Curse’s set wrapped up, the audience began to fill more of the venue and appreciate their unique style. The band concluded the set with one of their biggest singles, which the audience embraced lovingly. Sweater Curse certainly gained some new fans in the audience.

As the lights went down and Bonnie Tyler’s “Total Eclipse of the Heart” started the next set, the crowd once more began to get rowdy. Towards the end of the song, WAAX, leaving a gap for Maz to begin the set with “FU”. The immediate energy of the entire band alongside the effective lighting left me speechless.

I’ve been fortunate enough to both see and photograph one of WAAX’s shows before; I can definitely confirm that it’s a unique experience each time. The entire connection of the band was commendable. Each member was comfortable with each other to the point you could sense their musical bond. On top of that, the energy between Maz and the crowd was matched by the energy between James Gatling (Guitar), Ewan Birtwell (Guitar) and Tom Griffin (Bass).

Interestingly WAAX didn’t play many songs from Big Grief. However, it was evident that the audience already knew the lyrics to those that they did play.

The crowd in particular deserves a shout out. They were one of the most respectful crowds of any gig I’ve seen in a long time. Perhaps this is a credit to The Cambridge Hotel, or an environment intolerant of bad behaviour created by the band.

The whole audience moved and screamed along to every song of the set; In particular favourites “Same Same”, “I for and Eye”, “I Am” and “Wild & Weak”. The set seemed to fly by, and before the audience and myself knew it, WAAX were playing “Labrador” as an encore.

Apart from slight moments of tiredness and weakness in Maz’s voice (understandable considering how much she pushes herself), there was not a moment of disappointment in the show.

I’m certain that even bigger things are coming for this band. In the meantime WAAX will continue being one of Australia’s best acts, deserving of all the success coming their way.