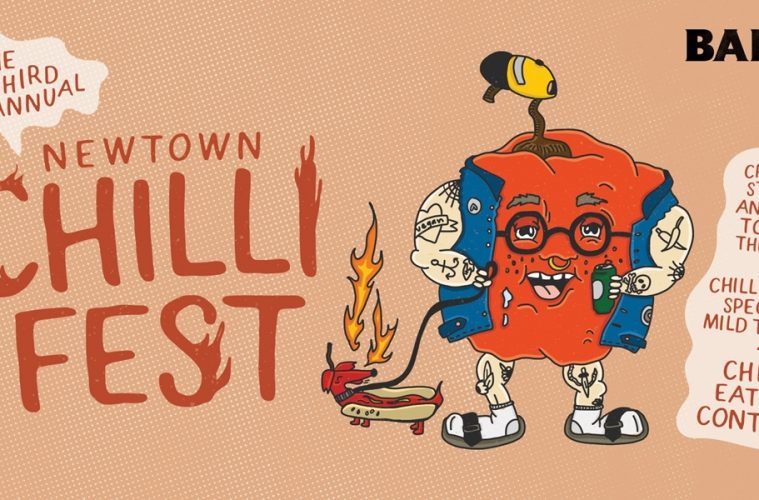 Anyone who has ever called Newtown their stomping ground knows that The Bank Hotel has taken many different forms over the years. Behind its illusive King Street façade, its current manifestation boasts a number of hallmarks that make it a Newtown institution.

Nestled at the back of the venue, it’s idyllic garden bar once again hosted the Annual Newtown Chilli Festival for the third year running, this past Queen’s Birthday weekend. Born in 2017 by a manager who loved chilli, and against the protests of one who was allergic to it, the festival showcases all things chilli: special food menus conceived by The Bank’s kitchen; a hot sauce competition and a chilli eating competition. And given that in its inaugural year all the food specials sold out within two-and-a-half hours, it seems that people, like Nick ‘Honey Badger’ Cummins puts it, “don’t mind a bit of spice”.

“From mild to wild” was the motto for the event’s special menu. It featured grilled octopus, vegan fritters, chilli dogs and of course, wings. Each dish had varying levels of heat for everyone, though compared to last year’s event the kitchen very much exercised restraint with the spice.

The chilli dog took the top spot this year with a five alarm chilli con carne topping; a tasty classic offering a comfortable edible amount of heat, which is great. You didn’t waste your money on something unbearably hot. However, it did take away the theatre and tension that comes with something that you just know is going to be insanely spicy, so it would have been nice to have the option of taking up a challenge. The sauce on the wings last year was so spicy it temporarily affected my friend’s motor skills! It might not taste the best, but it’s certainly fun to watch!

At the heart of the venue is Uncle Hops, The Bank’s specialty craft beer bar. In previous years it had poured a variety of chilli infused beers from local and domestic breweries. No chilli beers this year however, much to the dismay of some punters.

Instead the tap list consisted of stouts, cream ales, lactose beers, and a smattering of easy drinking lagers and pales. Bar manager Tom Pigott said of the choice: “We listened to the feedback from last year, which was that people were kind of overloaded with chilli and that there was no real relief. So to combat that we decided to run with some creamy ales and lactose beers to help soothe the heat”. Even sans chilli, Uncle Hops was slinging some pretty unique and tasty brews, including a vanilla porter from Yulli’s and a mango lassi IPA from Feral Brewing. Maybe next year we’ll see a return of the chilli beers.

By 3pm the Garden was packed for the main event: the chilli eating competition. Hosted by the fabulous Tora Hymen (whose spicy commentary was giving the chillies a run for their money), contestants had to eat a spectrum of whole chillies; from Green Cayenne all the way to Carolina Reaper (and a few shots of hot sauce for good measure), chewing at least six times on each one.

It seems that a few people made the classic mistake of underestimation. Even after the Jalapeños people started to drop off, gulping down their schooners of milk. Others possessed impressive capsaicin consumption skills and made it through to the Yellow Scorpion Chilli, the third hottest chilli in the world. One by one people threw in the towel, red faced and pained until only two remained:

Wearing his signature BMX helmet, Rhys Psychling, who took the crown at the first Chilli Fest vs. Dominic Clapham, the defending champion from last year. They were going head-to-head against the final boss; The Carolina Reaper.

After consuming a blistering seven Carolina Reapers Dominic took out the crown once again. Getting down the first two but unable to get through the second round of five, Rhys tossed his final chillies into the crowd in defeat. That said, it is worth mentioning that Dominic has no heat receptors in his mouth, so Rhys’ efforts were indeed valiant.

Wrapping up the day were the winners of the hot sauce competition, where sixteen of The Solotel Group’s chefs from venues around Sydney put forward their secret Carolina Reaper recipes for a blind taste test. Michal Vana from Goros took out the top spot from the judging panel, and The Bank’s own Juan Costa’s sauce ‘Juan Wick 3’, was the people’s choice, just like Keanu Reeves.

All in all the team at The Bank are on the right track to finding the right balance to make The Newtown Chilli Fest a standout community event. That said, one thing is for sure; There were definitely a lot of people punishing the porcelain the next day!