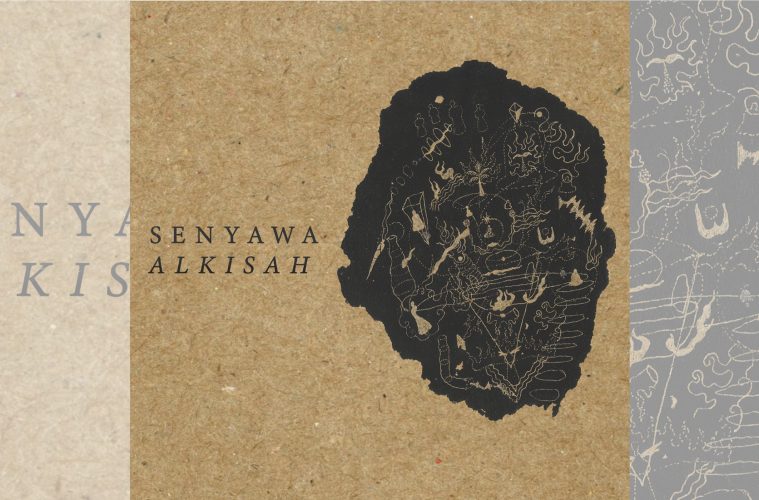 Through experimenting with decentralisaton Senyawa released Alkisah through a number of different labels. They allowed the labels to choose the artwork, mixes and remixes they felt would better fit for their version of the album. There probably are other differences of which I am unaware of.

With this in mind it bears mentioning that the version I’m talking about is the one released on Phantom Limb.

Opening track “Kekuasaan” plays out in a way that seems mournful. At first it’s lone string work and it remains as such until vocals come in, distant, echoing, brief and matching the string’s tone neatly. It almost feels darkly playful.

“Alkisah I” follows with gentle sounds at its beginning. Soon electrified and dulled string work comes into play. Vocal sounds call out and a scattering of percussion echoes out. Throngs of strings strike among more percussion, and sounds build upon the racket. Vocals become more and more frenzied as drones and thunder roll throughout. Something akin to a guitar solo comes in, both joyous and frenzied. It falls onto the land and spreads out, then suddenly cuts off when necessary. Eventually the song reaches climax and hits a point of great intensity before it falls into background sound.

“Menuku Muara” takes on a darker, more muffled and rather noisy sound. Percussive vocals echo among the mass as it presses on. Eventually the song starts to move into the background and rain comes in, seemingly washing everything away. The music persists, though eventually the rain wins succeeds.

Chanting that opens “Istana”. A plunging into a harsh and heavy drone soon follows. Percussive sounds gather at specific points as the vocals howl outward. A highly constructed sound becomes apparent as the piece menaces, almost sounding like some sort of torture. At the same time, there’s a comfort in it; a sense of peace stretches forward. There’s a sense of dread pervasive here, but at the same time it feels much like a meditative call out into the dark of the night, so to speak.

Where “Istana” was overtly heavy, “Kabau” opts for something less so; It’s calmer and more brooding. Cleaner strings come into play, as does a simple, repeated bass melody. The song is more willing to breathe and seems more journey-like. Toward the song’s end something akin to a rising comes forward. Maybe it’s a hopeful, communal moment; Maybe it’s the flickering of flames. I’m not sure, but it certainly feels more relaxed than Alkisah‘s prior tracks.

“Fasih” has more of this kind of playful thing going on at first. A slight harshness, but it doesn’t cut into the song. The vocals come in, followed by a hard and brief drone and suddenly the song gains a new context. These sections cycle with some slight shifts, and everything seems steady and guided. Eventually the song locks into something else and then starts building in intensity. It’s a gripping intensity; just really full on, but it doesn’t feel like an assault.

It would’ve been easy to follow with the same kind of intensity, but instead “Alkisah II”, whilst still full on in some ways, peels things back a bit. There’s a bit more space, though there’s also a bit more urgency. Vocals wail in the distance as the sounds underneath throb, pushing forward to something. Eventually the vocals drop and seem to detach, becoming entirely within the moment. What sounds like guitar returns, fuzzing out and building on the urgency and tension, weaving itself in and out of the vocals. It cries out as the vocals increase in their intensity. Eventually much of the sound pulls back, leaving only a repeated rhythmic pulse and the vocals to call out.

“Kiamat” is what Alkisah ends with and it’s mostly really energetic and wonderful percussion. A chant sits among the percussive sounds and everything keeps on building to a singular point and culminates in one final strike. It clears and levels, leaving unraveled sounds ringing outward. A rather bombastic end, but so very fitting.

In Interviews near and around Alkisah‘s release, Senyawa have talked about how the album is about apocalyptic events and reestablishing in the aftermath of one. Considering the album’s sound and its strong narrative sense, it does well at conveying the imagery associated with such things. It gets pretty heavy in places, but considering what and how Senyawa are exploring, that heaviness works to the benefit of the album. Alkisah is heavy for the sum of its parts; its a wholly engrossing and moving album with a great deal of meaning and thoughtfulness within.