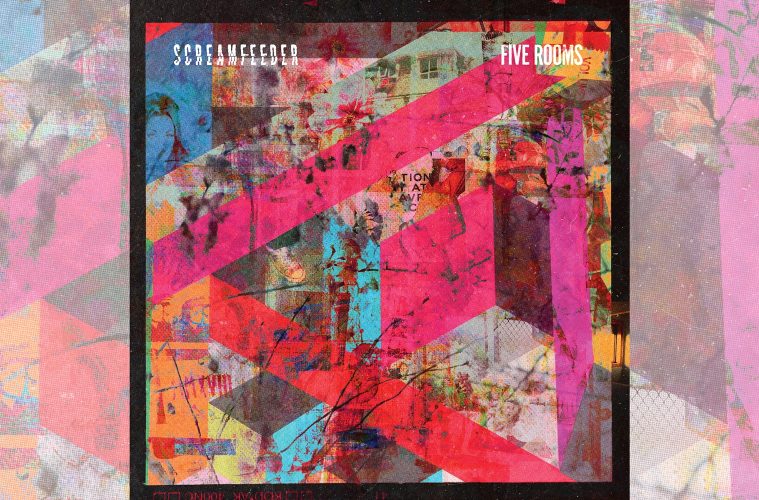 After a solid tenure, Five Rooms is Dean Shwereb’s last album with Screamfeeder so it’s nice that opener “Day Crew” starts with him thumping away. From there guitar, vocals and bass follow suit, almost as though they are… well, walking into a space. From there the song plays out in a way that feels reflective and does so seemingly without heavy layering. It’s a good way to start as much of the album comes off as sparse.

So there’s a minimal and “small” sound to many of the songs; in a sense it suggests a raw sound to Five Rooms overall. It also allows the melodic qualities and the vocals to come through with a little more clarity, though the vocals seem to be a bit more at the forefront than usual so they probably would’ve been fine regardless. “No Past Tense”, “Everything is Temporary” and “How We Pay” carry better without heavy layering as they’ve the sense of space they require. Conversely, “Late to the Party”, “Deidre” and “Try to Find Us” work better as there’s little around that’s as big and dramatic (or snappy in “Deidre”‘s case).

Five Rooms feels like a slow album but it goes by quickly as nothing overstays its welcome. It’s difficult to claim that the songs get in and out; there certainly is a bit of fermenting, but there’s no tolerance for dragging. Screamfeeder know where to cut and where to draw out and so the songs feel the right length. There’s enough here to get some nice hooks and pleasing melodies through without beating things into the ground; there’s also the right amount of space for lyrics to get meaning across without becoming verbose.

Regarding meaning, there’s a bit of weightiness here, though some things come off as lighter than others. Some parts are more indirect than direct but generally the intent carries across, if not through the lyrics then at least through the delivery; speaking of which, is as solid as the instrumental performance. Vocal harmonies and melodies match the songs in a pleasing and appealing manner; there’s a lot of smoothness and a suggested softness which suits the whole album well enough.

Perhaps Five Rooms is not far from the unexpected for Screamfeeder. They’re doing something they sound at ease with and overall the album works fine as a collection of songs, many of which feel small. It is likely that they’d sound bigger live, but they work within the album’s context. Maybe this is a calmer Screamfeeder; maybe not, but it certainly is them still sounding engaged with what they are doing. These songs sound genuine. There’s passion here and it pays off. Five Rooms isn’t necessarily an immediate album, but it is satisfying.