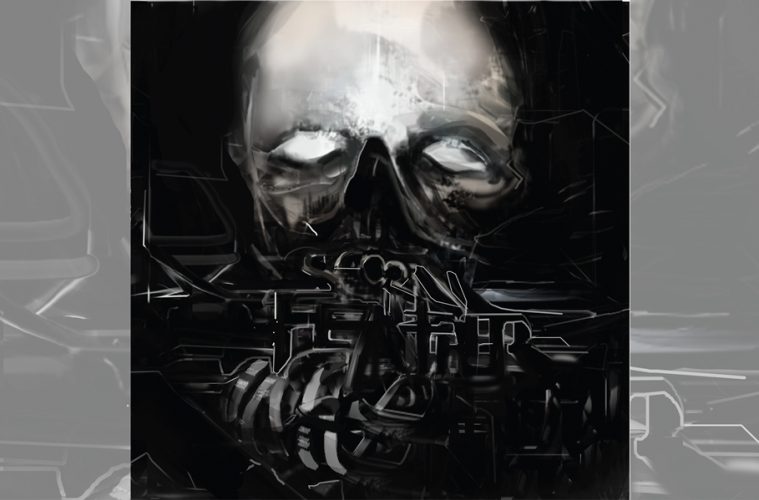 The return of Scorn saw the release of a new song, as is usually the case when someone returns to a project after its retirement.

The first thing to note is that “Feather” is less aggressive than Yozza but no less menacing.
Low, fuzzy bass for other sounds to build around, and a sparse drum pattern built around dub dominate the song. It’s “Feather’s” fundamental rhythm and Mick Harris works around it as though he had never stopped for a while.

Sounds come in and out – not so much gradually, but stealthily. Occasional flourishes of distorted noise move over the dry landscape. It’s dark and menacing, and as much in the foreground as it is in the background.

The two remixes that follow feel more like “Feather” progressing more than they do interpretations, whilst also being their own thing. Between the original and the first remix there could’ve been something else that would’ve led into it and we’d be none the wiser. However, it makes sense to the song as two remixes and itself rather than a lengthy continuation. “Feather” is somewhere between passive and active. Considering its mood and the sounds it uses, having it longer would cause it to become tiresome. Conversely, taking the remixes, combining them with the original and keeping a shorter runtime than combining all three without edits would lead to loss of detail.

The first (“Wittering Mole Mix”) is much drier than “Feather”. The bass is more in the background, the percussion is lighter; More crushed, higher sounds come to the forefront. Their development is less stealthy and more overtly gradual before dropping off when necessary. If “Feather” sits somewhere around mid-pitch, then “Wittering Mole Mix” sounds high-pitched.

“Ginger Grass Mix” starts as though it took the ending sound of the first and twisted it around. The sound oscillates, or bubbles if you will. It’s difficult to tell if this one or the first remix holds more noise. This one certainly is more dramatic – that much is for certain.

Something sounding like shattering glass punctuate in lieu of a snare sound to great effect, whilst the rest of the percussion itself remains light, yet tense. Bass remains in the background, though with more impact. It mostly oscillates between two notes and spaces itself out.

Slowly, yet steadily “Ginger Grass Mix” builds in sound. It grows in its menace and dread, but instead of exploding, the song allows itself to trail off and fall away.

Comparatively, “Whatever is Touched Turns” is a consistently brooding affair. Sounds come in and out, but the song is more content with getting more out of spacing things apart. Bass is prominent but not constant, and sounds are thick but not suffocating. It’s the space that allows the sounds the stand out and build the mood. The song stays close to the prior three tracks. However, It’s a little bit quieter and a bit more breathing, which is what makes it a good choice for a closer.

“Feather” works well contrasting itself. The way the remixes sound allow you to hear the song from different angles (so to speak) without completely feeling like familiar territory. Finishing with “Whatever is Touched Turns”, Feather makes for a brief and satisfying collection of music. It also makes for a pleasant, worthwhile return for Scorn.