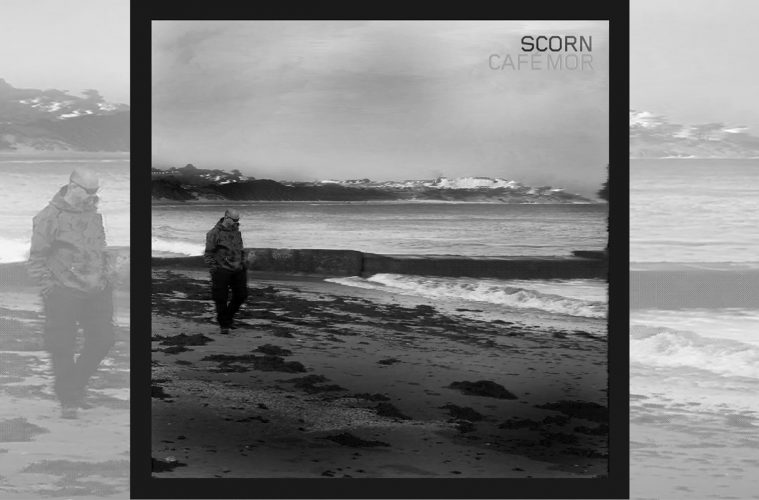 On Scorn’s Cafe Mor a lot of the material seems to blend into each other… at first. It can be a number of listens before the tracks reveal themselves as separate from each other as this is a slow-burning record. It’s almost as though Mick Harris was looking to sketch out something in a few different ways.

The soundscapes are quite dry and sparse in feel, but rich in sound. There’s plenty of auxiliary sounds; some piercing, and some low and elongated, among others. Beats stay simple-sounding but hold a strong impact through their steady and precise punctuation.

A sense of menace comes through and the more the minimal feel of the songs begets the brooding, almost dread-like atmosphere. There’s an aggression there that seems almost inherent to the songs, but it’s not willing to be in your face. The songs stretch out and transform slowly, letting the mood build rather than shoving it in your ears.

There’s a little bit more dub on Cafe Mor than a few of Scorn’s past releases. Often it’s weaving throughout the main body of a song, though sometimes it’ll be right at the forefront, if only for a brief moment. The dub elements make for a snug fit in the Scorn palette; It’s there, it’s noticeable, but its worked into the songs and not the other way around. As such, it often enhances the music’s atmosphere as it’s something else to build off of.

Jason Williamson’s appearance on “Talk Whiff” works really well. He starts off deceptively mundane, but as the song progresses his words gain a sort of uncomfortable, frustrated feel. It’s likely due to the song’s eeriness and the way Jason uses his pitch which makes for a highly effective combination.

Mick Harris didn’t need to bring back Scorn; well, maybe he felt he did. I don’t know. Either way, whilst Feather announced the return, Cafe Mor justifies it. It’s an album both new and familiar, and like many Scorn releases it has a strong sense of atmosphere and identity. It’s sleek, flows well and stays consistent throughout. The guest appearance from James Williamson fits right in with everything else, and whilst minimal, overall the album is rich and full in sound. It’s a welcome addition to Mick Harris’ work.