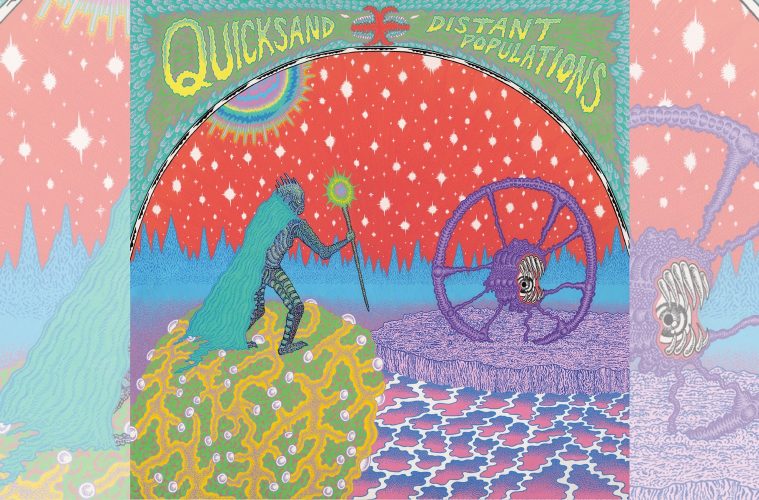 Distant Populations starts with a quick, fitting burst of percussion, then kicks into some sort of gear featuring fuzzed guitar, loud drums, shouted vocals. “Inversion” takes these and draws them out, pushing atmosphere forward. This is Quicksand using aggression and sounding spacey. It’s a direct song, it announces intent and it’s lean and mean.

From there “Lightning Field” moves with a driving aggression, but also feels more floaty and detached. “Colossus” goes for this sort of swaggering stomp, perhaps in trying to suggest its title and it sort of works, but doesn’t quite hit the mark. Still, its sound design works well, and once more it continues with a spacey, detached feel.

Okay, so Distant Populations is a pretty aggressive-sounding album, but it’s often as “Inversion” suggests, balanced with something else. Melodies come forward as does groove, among other things. Essentially it’s a heavy album, but without going all out on heaviness. Perhaps it helps that the lyrics often feel like they regard societal issues, though seemingly in a vague manner. There’s enough of a balance in them to prevent them from feeling either too pretentious or too obvious. They’re probably rather simple, but they leave room for thought.

“Brushed” strips back the loudness and instead goes for a softer, moodier space. It remains as such throughout the song, leaving space for shimmery, pretty sections. “Katakana” at first seems like it might follow in a similar vein, but instead brings the loudness back. The percussion plays something reggae-like which works well when the song gets really loud and helps keep things flowing smoothly; the other instruments lock down on the groove and drive on forward with ease.

“Missile Command” builds around this sort of expansive sound for a bit and once more draws sounds out, building atmosphere. It’s pretty straightforward but that works in its favour. “Phase 90”, also is straightforward and it’s fine, but in sticking mostly to a highly familiar melodic pattern it feels like a really, REALLY safe move rather than a strong song. Quicksand kind of tinker with it a bit through guitar and percussion, but there’s not enough to keep the song effective over repeat listens. Perhaps it’s the most personal piece and that’s why the band went for resolute familiarity; I don’t know if that is the case, but in doing so the song grows increasingly flat over repeat listens.

“The Philosopher” has more of a rocking stomp, and seems to end before it shifts gears a little. For a brief period Quicksand get tense and ominous before picking up for one more chorus. At first it feels a little off, but on successive listens it makes more sense.

Following track “Compacted Reality” functions as this small interlude of sorts. It almost sounds like Quicksand made something, then played around with pitch and speed, but it’s hard to tell. It’s a quirky bit of music with a sense of gloominess that shouldn’t fit but it somehow does.

“EMDR” alternates between off-kilter and straightforward rhythms effectively. The way that the percussion handles the shifts creates a sense of compression and stretching, and it almost feels like riding waves. It makes good use of beat and atmosphere to get an expansive feel going where the band felt necessary.

“Rodan” closes Distant Populations with more tension and floating vocals. It has some solid, spaced moments and ends the album on a high note. Maybe it’s in part a nod the band. Maybe not, but regardless it holds a sense of the climactic without going overboard. It doesn’t push loudness or quietness and it doesn’t feel either too aggressive or not aggressive enough. Once more the percussion comes across solidly, keeping things locked down and tasteful whilst adding a lot to the song; Much like the start of the album, it closes things off with a quick, fitting burst.

Whilst Distant Populations is not a bad album, it’s more linear and less adventurous than Interiors. Furthermore, the latter had more space and the former is more spacey, if that makes sense. This said, Interiors also has more bite, and perhaps a bit more refinement. It feels like Quicksand looked to further themselves and in doing so have provided something tighter, more refined experience. There’s meaning here and there’s conviction behind these songs. Not all song hit the mark; some are a bit ho-hum, but overall the album does what it does well.