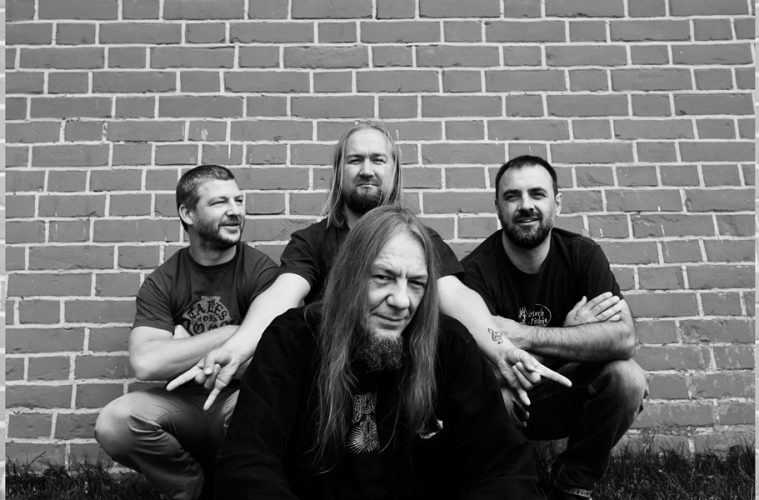 Q & A with Gareth of Lord Vicar

Having the opportunity to send through some questions, I did just that. Gareth Millstead (percussion) responded in kind.

Ez: In the press release the album is described as a “return to longer form”. What was it that brought upon this shift?

Gareth: There is no specific thing, more that it felt like the right thing to do. Initially Kimi had the idea for another short (approximately 40 minutes) album and an EP, but it became clear that that idea wasn’t going to work out, mainly because of record company / business related factors. So at this point we had one completed song (Levitation) and a bunch of ideas and sketches. I began to feel quite strongly that the material we had would work together well in the format of a longer album. For my part I pushed it in this direction and the other guys were down with that. It began to take on this very dense, oppressive but dynamic form, a kind of emotional journey that spans over 4 sides of vinyl.

Ez: In that regard (and taking into consideration the more progressive structures), do you feel that the album is a step forward for Lord Vicar?

Gareth: Definitely, just as every album we have done has been a step forward from the previous one. We took the deliberate decision with Gates of Flesh to keep it to a single vinyl, but as I mentioned in the previous question this one was taking on a longer form. During the writing process I suggested to the others that this album should be a true double album and we went with that. This gave us the space to really explore different dynamics and I think we touched on a few areas that we haven’t on previous albums.

Ez: The Black Powder touches on a number of different themes relating to mankind’s actions (or lack thereof) leading to some pretty serious issues. In what way does Lord Vicar tackle these issues that other bands and artists have not?

Gareth: Very difficult to give a substantiative answer to that one. The things we write about aren’t so unusual for artists to cover, particularly those involved in this genre. The darkness in the world, the suffering of innocents, crushing depression and suicide are all pretty well covered by others! But Lord Vicar is something unique, I can’t tell you exactly what it is, other than it’s the chemistry of the different members involved.

Ez: With that said, do you think that it is possible to work on turning the covered issues around for the better?

Gareth: That is a question that pretty much every politician, philosopher and spiritual leader of has tried to answer since the dawn of time! I would say yes it is possible, but the changes required in human attitudes and social, political and economic systems are enormous. The question I ask myself is, are they too great to overcome? I honestly don’t know, but I’m not too hopeful.

Ez: Whilst songwriting duties were not handled by the whole band, how important was it for each member to agree on a piece of music before it was recorded?

Gareth: Kimi and I were the main songwriters and we would mercilessly crush any dissenting voices.

Ez: Lastly, how do you think The Black Powder will translate in a live setting?

Gareth: We toured in May 2019 and the new songs were very well received by the audiences. Temple in the Bedrock is particularly good live, great fun to play and the audiences really go crazy for it.

Ez: Thank you for your time. I hope that the rest of your day goes well.

Gareth: Thanks for the questions, I enjoyed answering them!

The Black Powder is available here.