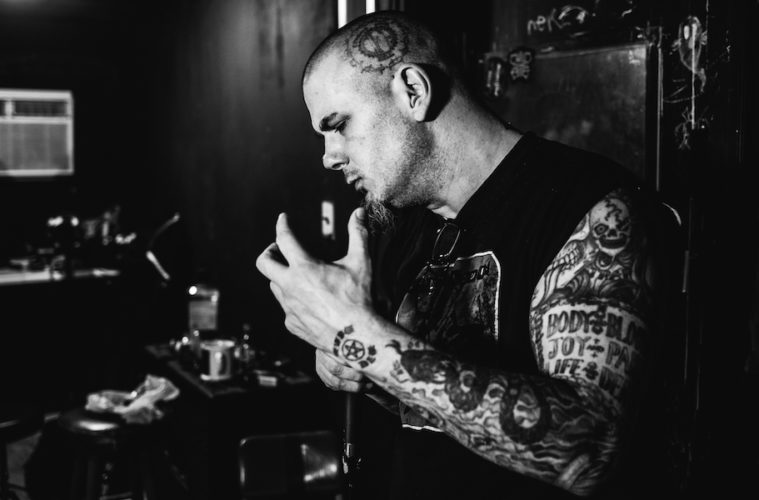 Phil Anselmo & The Illegals: Live at the Cambridge Hotel 31.3.19

Right, so let’s get this out of the way. Phil has done and said some absolutely ridiculously stupid shit in the past, he has caused hurt and suffering to those around him, his fans and even his band members. The question is, can he be forgiven? I have to be honest, I had a hard time listening to any of Phil’s projects (Pantera, Down, Superjoint Ritual, Viking Crown ect) after 2016’s Dimebash fuckwittery. But, Pantera are and always will be my favourite band of all time so it’s hard to miss what is billed to be a half set of The Illegals material and a half set of Pantera “Covers” especially when I never had the pleasure of seeing Pantera live (Thanks Mum for making me miss the Reinventing the Steel Aus tour in 2001)

The lineup for this years Thrash, Blast Grind Tour has gotten people’s tongues wagging and a lot of the shows were close to if not fully sold out and by the time opening band Potion took the stage the venue was near capacity. It’s been a while since The Cambridge hosted a matinee show so it’s kinda weird to be hearing the cacophonous rumblings of the Sydney based Doom Metal three piece while the sun was still out. Potion are a fucking loose, riffing machine, filled to the brim with Sleep and Sabbath worship and each member is at the absolute top level of their burnout-doom metal game, but it’s their drummer/Vocalist Chris Downey that is their secret weapon, forever in the pocket, placing that drum kick exactly where it needs to be. Vocalist Lee Jowono is a fucking powerhouse, his mangled corrosive vocals sit perfectly over sludge rust filled riffs and Bassist Stella Leung keeps the low end peppery as all fuck. It’s such a peppery set that the crowd needs another beer.

And the hits keep on coming when Japan’s Palm come out of the gates swinging for anything that moves and these Osaka natives know how to find a riff that kills and drive it right between the eyes of the punters in the crowd. Like a perfect shitstorm of Doom and Grind (I know that seems like something that shouldn’t work but it does) Palm have awoken the Newcastle Metal giant and even summoned the afternoons first circle pit. At 5pm. On a Sunday Afternoon. Located entirely in the main room at the Cambridge. (If you get that reference you deserve a cookie) Palm take cues from bands like Trap Them, Power Trip and Converge by taking the best parts of metal and hardcore and smashing them into an epic maelstrom of grinding riffs, blasting drums and demonic vocals (spewed forth from the amazing frontman Toshihiko Takahashi) Tracks like Scapegoat really bring a late 90’s early 2000’s Metallic Hardcore vibe (Eighteen Visions/Martyr AD etc) which, to be honest, is refreshing as all fuck amongst all the beatdown tough guy hardcore bands that are getting around these days. Do not sleep on this band, check them out as soon as you can because if the stars align for them they will blow up quicker than a kid at a birthday party who misses out on cake.

Chances are if you’re reading this you’ve more than likely seen King Parrot live before, if you haven’t you need to get up of your lazy ass and get to a show because KP are bringing the crusty filth to the local shithole and they deserve your attention. Youngy and the KP boys are workhorses, releasing  3 albums, 1 ep and a split since 2012 chock full of fuckwittery, blasting riffs and absolutely iconic Australian Grindcore/Metal. The wonderful thing about seeing KP live more times than you can count is watching the consistency and progression from pub metal band to world beaters, and to be honest, they haven’t always rubbed me the right way but the most previous 4 or 5 times I’ve been lucky enough to see them they’ve blown my wig off my skull. Youngy has started incorporating lower, almost death metal vocals to his repertoire which just adds another level to the sonically cacophonous clusterfuck. If you remember the Australian band from the early 90’s called Damaged you might have some inkling as to what King Parrot hit sonically, bastardized grind riffs flow seamlessly into groovy  chugs whilst Youngy does his best to hit the highest screams he can (Probably scaring the ever loving shit out of most of the first four rows) Songs like Dead Set, Piss Wreck, Disgrace Yourself and set closer Shit on a Liver showcase why the band deserve to be where they are which is kicking ass with Heavy Metal heroes like Phil Anselmo.

Ok, Ok, I know half of you probably scrolled straight past the opening bands paragraphs just to get to the juicy parts, admit it, it’s why you’re here. I’ll get right to it then, no need to be snappy. All hyperbolics aside Phil and The Illegals ruled, they kicked as, they ripped. There, I said it. Opening with a short set of Illegals material that was absolutely skull numbingly heavy and it was easy to see that Phil “The Kid” Anselmo was in good shape, his voice was keeping up with the flaming riffs and jackhammer drums which is definitely a testament to the headspace that he seems to be in. He presented as cool, calm and (mostly) sober which allows him to breeze through 5 Illegals songs without missing a beat and although the crowd are hungry for Pantera material they still lap up all of the material presented. Pantera, it was almost a household name in the early 90’s especially to oily haired, pimple faced teenagers who had an axe to grind with their parents, the church or just anyone in power. They created a sonic soundtrack to skating, hanging out with friends at parties and wrecking your bedroom when your parents see your report card. Their demise in 2001 was heartbreaking and even worse was the day in 2004 when their guitarist Dimebag Darrell was shot and killed whilst performing with his post-Pantera band Damageplan in Columbus, Ohio forever shutting the door on a possible Pantera reunion. Phil announces “Let’s get one thing goddamn straight, this is a celebration of Dime and Vinnie” and the crowd erupted as the band kicked into a ravishingly heavy rendition of “Mouth For War” Phil gives a shout out to all of the opening bands (It was the last day of tour for both Palm and Potion) and quickly invited band members on stage saying “This mic is as much yours as it is mine” before rolling into fan favourite “Becoming” and to be honest this reviewer doesn’t remember seeing the stage much after that between his own headbanging fits and the mosh pit that was seemingly heading towards the roof it really was all a blur and the blur continued as the band promptly rolled into a mashed up Domination/Hollow. Although I almost lost my voice my personal highlight was a bit of a lesser heard live track “Hellbound” from Reinventing the steel and with that the night was almost over but there was no way anyone was leaving without more. Phil demanded an impromptu jam session which saw members of every band over the night get onstage for a sloppy cover of “Walk” which went for a good ten minutes and kept every person in the venue fixated on the stage. Just when everyone thought they couldn’t fit anymore in Phil and the boys finished their set with a stomping “A New Level” or as Phil so lovingly re-named “A New-castle of Confidence” Truly, if you missed this tour you really stitched yourself up because by satan’s beard they came, they saw, they kicked our asses.