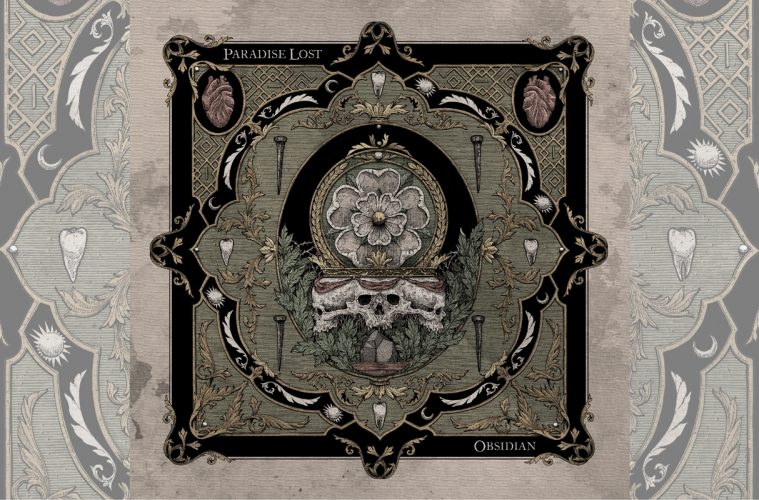 Gentle, quiet and tense. Super-moody. Quiet vocals and quiet playing. Strings come in, punctuating and emphasising. Some extra vocals followed by more strings. A deceptively-quiet and tender start “Darker Thoughts” provides to Paradise Lost’s Obsidian. At the right moment the band kick into high gear and the song becomes much more dramatic. Everything gets louder, the vocals switch to a scream and the drama piles on. It’s a grandiose opener for a grandiose album.

So much drama you won’t believe it’s not a soap opera.

Alright, in all seriousness Obsidian is quite dramatic. Whilst at times it does get verbose, quite often the dramatics fit the marriage of heavy riffage with pop sensibilities. At other times the verse / chorus / verse structure gets a little tiring; it’s difficult to not wonder if a different approach would serve to better some of the songs. That said, this is clearly a band that know what they’re doing. They know how to work well with said structure to create hooks without sacrificing weight or intent.

The vocals have this thrust and graveness to them that clicks with the rest of the band; they’re direct, hard-hitting and swing from clean to harsh with the greatest of ease. The percussion pounds away with a great deal of punch and precision; they’re a great driving force, though unfortunately sometimes buried. The bass has this great dirty, rolling quality to it that really helps to fill out the songs a great deal whilst the guitar finds space among everything and helps to drive home the drama and intent.

Whilst Obsidian is full of great performances, on closer “Ravenghast” Paradise Lost really deliver. The song starts with piano and (alongside what sounds like vague vocals) quickly builds an ominous atmosphere. Guitar comes in soon after, followed by drums and bass. Once into the swing of things the vocals find their way, sitting quite comfortably on the music whilst pushing outward with a great deal of force. A couple of “clean” sections interspersed within the grind make an appearance, allowing for just enough breathing space before the band switch gears.

Paradise Lost start ascending; at first slowly before switching to something more galloping in sound whilst an impassioned solo makes itself apparent. Once it’s time, “Ravenghast” switches back to its main riff, keeping things sounding big and conclusive. Rather than have it all end on one definitive riff, instead the song (and by extension, Obsidian) has the band come to a stop; Auxillary sounds and sombre piano sound wrap it all up. It’s a bit of a far cry from how the album started, yet at the same time it’s wholly familiar.

There’s a fair bit of gloom on Obsidian, but it’s not a depressing listen. At times it gets melodramatic, but often it’s fun and groovy. Perhaps creating a dramatic sound whilst sticking to some rather tight structures and keep it all sounding enjoyable is where Paradise Lost’s focus mostly sat for this album; If so, it’s hard to fault them for it as – quibbles aside – it was a resounding success. From beginning to end, Obsidian delivers a satisfying experience, even if you don’t quite fall under its spell.