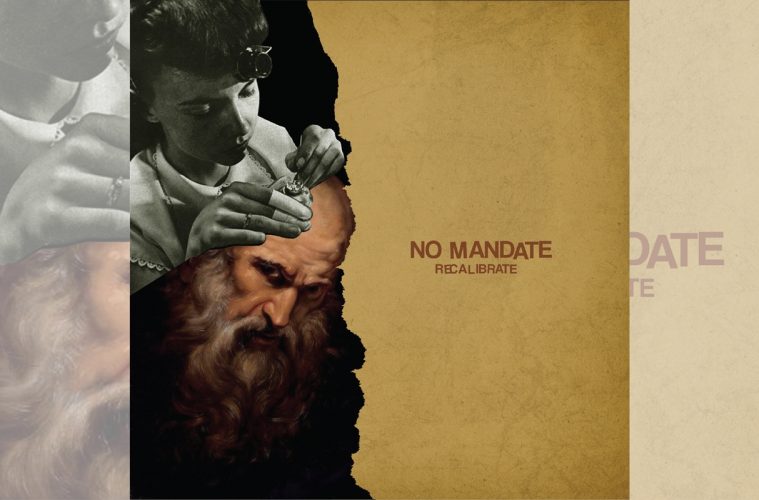 A quick drum roll and “Thursday” opens Recalibrate with what feels much like the big rock ending. It’s hard, heavy and final. Where do you go from there?

Well, you go into the head-bopping; You get into the space. From being fast and furious No Mandate move into a relatively slower, yet energetic and striking melody. There’s a slight surf inflection hidden in there that helps the band ride the groove until it becomes something a little heavier and angular.

There’s a light meanness here before “Thursday” switches into a beautiful and moving section. Guitar rings and phases outward whilst bass and percussion pull back and provide space, letting their sounds linger that little bit more. Then it’s back to the start, sort of. There’s some variation in what the band does here, and instead of doing the obvious ending instead the song ends with something spacey and muted.

“Thursday” is a great song to begin Recalibrate, and thankfully the songs that follow are as enjoyable.

Recalibrate‘s “Recalibrate” is more overtly reggae in sound. Ringing guitar calls out at first lonely, then gets a response from bass and percussion. The vocals come in; They’re sort of gritty and rather pointed. The lyrics themselves express meaning directly; there’s little, if any room for interpretation.

When around the chorus the music gets a little more “welcoming”, providing a sense of unity. Then a calling out of “RECALIBRATE!” and suddenly the song morphs into a sort of hard rock, angular thing. This then leads into the song sort of looping on itself, eventually closing with the angular section. It works well closing the song off as it provides an appreciable climax, keeping the song at the right lengthy whilst ending just at the right time. It also helps to lead into the next song.

The blast of “Nothing to Declare” follows and its just great. The song is brief and biting, making efficient use of its time without feeling crammed. As a small burst it works in part due to how well it flows without overstepping its welcome and in part due to how it shows what is going on in No Mandate’s sound. The band take in a few different styles of music – reggae, punk and prog, among others – and get them working together in this wholly organic way.

Of course the blend works just as well in the other songs. “747 Dub” sees the bass and percussion mostly engage in a “sneaking” rhythm. The guitar often adds inflections, helping to set tone and build an undercurrent of tension. The instruments curl around each other steadily and firmly, occasionally feeling as though they’re moving along a spiral.

It’s not all quiet; Occasionally there are some sharp strikes that play out, hinting at something heavier. Eventually No Mandate lean right into it and get into a real mean sounding groove. It hits hard and it feels like a point the band built to, but rather than drag it out they pull back, let this sort of relaxed, sort of energetic solo ride the rhythm, then eventually end on a on a rather pretty, almost-hypnotic melody that dissolves all the prior tension.

“Hamster Wheel” embraces a strong sense of reggae early on. A stepping beat and following bass play out whilst guitar plays out with a sense of striking. Eventually words come in and the guitar arpeggiates; the song shifts to a something a little softer. The vocals keep things feeling gentle and welcoming and uplifting. Upon the final words of the chorus the music seems to elongate and ring out before returning to the song’s reggae base.

After the second chorus the song builds a little, then dissolves before reaching a climax. It finds itself in quieter territory, but then slowly builds in energy and melody. As it gets bigger the song feels more uplifting than before. There’s a slight excursion into something ever-so-slightly harder that perhaps functions as one last bit of questioning. Then No Mandate let themselves push outward and the song becomes vast and freeing. “Hamster Wheel” becomes wide, atmospheric and pretty. It’s a wonderful release. However, it is not to last and the opening bass line closes the song.

If the tracklist had gone a different way, then Recalibrate could easily have ended there. Instead of wrapping things up No Mandate once again embrace the meanness. Shortly after starting, “Other Brother” sees the band riding a solid groove. Guitar plays striking notes somewhere among the bass and percussion and rides the rhythm with ease. The band stick to this long enough, then once more make an adroit transition to something a little more gentle and perhaps questioning.

There’s a fair bit going on in “Other Brother” and it all fits together nicely. At times it feels as though there’s a push and pull as the song oscillates through different sections. It helps to keep things dynamic as well as set a specific tone to the song. Perhaps then when the band let loose and rock out hard they’re still playing to the push and pull, finally reaching a point of resolution. This doesn’t last too long, however, and the song switches to something a little more tense and “wound up”, before unleashing one more time with both the conclusion building on the section that, when it first appeared, was gentle, as well as the conclusion of the song.

The conclusion sets up the start of “Keep the Change” rather well. Here No Mandate close Recalibrate with a solid blast of punk / hardcore. Whilst a little verbose it’s brief and also an oddly-pleasant way to wrap up the album. There’s little blending of sounds and styles here; it’s just full on rocking out and hurtling toward the end.

Recalibrate has a few different things going on in it and it all works well. There’s some great melody, solid grooves, and tight musicianship. There’s plenty of enjoyable moments, but what works most in the album’s favour is that, whilst some of it gets complex, none of it necessarily sounds as such. It’s inviting and easy to listen to. Recalibrate offers a lot of great music, but without being overwhelming.