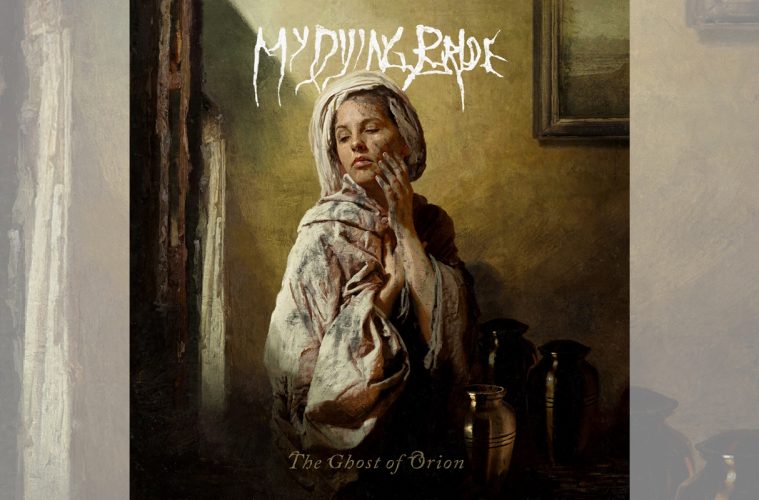 My Dying Bride: The Ghost of Orion

At this stage My Dying Bride have existed for quite some time. They have a career in music; They make albums; And so on and so forth. It had been a while since Feel the Misery, though (depending on your point of view) five years isn’t that long. As far as I’m aware, there were various reasons as to why which I won’t get into here. All in all, after a period of time The Ghost of Orion eventuated.

So The Ghost of Orion is full of doomy and gloomy music. It has a slow and methodical flow in how it moves through each track. There’s a strong sense of drama that comes from said flow; notes drawn out give more time to permeate and build on mood and atmosphere and melody. The oft-layered vocals stretch and compress words where it would be most effective whilst providing a sense of melancholy; When more harsh there’s a greater sense of immediate impact that matches the crunch of the other instrumentation quiet well. However, the songs don’t sound miserable; rather there’s a strong sense of acceptance and understanding (and sometimes defiance), as well as a sense of moving toward something greater.

Whilst mostly in the album’s second half, some tracks break the album up a bit by being quieter than what surrounds them. “The Solace” is mostly guitar and vocalisations working together to create something calming and akin to ambience. “The Ghost of Orion” features clean instrumentation along with quiet vocals, conjuring an ominous air. “Your Woven Shore” has a strangely homely feel to it, which is fitting for it being The Ghost of Orion‘s closer. Whilst it starts with choral vocals, gentle keys aid the song in transitioning its melody toward being string-driven. The song is sort of a reflection of opener “Your Broken Shore”, though much smaller in scope. It’s a gentle and soft end to a mostly large and overtly heavy album.

Allowing for a bit of breathing space and continuing the album’s spell, these quieter tracks slot in nicely whilst also allowing the larger and much more grandiose “The Long Black Land” and “The Old Earth” to stand out more without fatiguing. These two are the longest tracks on The Ghost of Orion; the separation gives rest and allows them to remain distinct from each other.

This also means that the first half is more continuously loud than the second, creating a sense of transition from “The Solace” onward. The first three tracks are (slightly) shorter than “The Long Black Land” and “The Old Earth”, though not any lesser for it. They carry a commonality that creates a kind of shared weightiness. Then the album grows calmer and breathers a bit more; after two thick slabs intermingling with quieter stuff, the album comes to a gentle close.

At this point in their existence, it’s great to see My Dying Bride looking to keep putting out something worth hearing. The Ghost of Orion album isn’t quite a slow-burner; nor does it immediately provide all of its answers. There’s something quite appealing about the album that I can’t quite put my finger on. Maybe it’s the riffs or the vocals; maybe it’s the overall performance from a band doing their best to make sure their songs leave nothing wasted. Perhaps it’s that, at times, the guitars, violin and cello gain a gliding quality that’s similar to My Bloody Valentine’s “Come in Alone”. Regardless, My Dying Bride put a good deal of work into this album and it pays off.