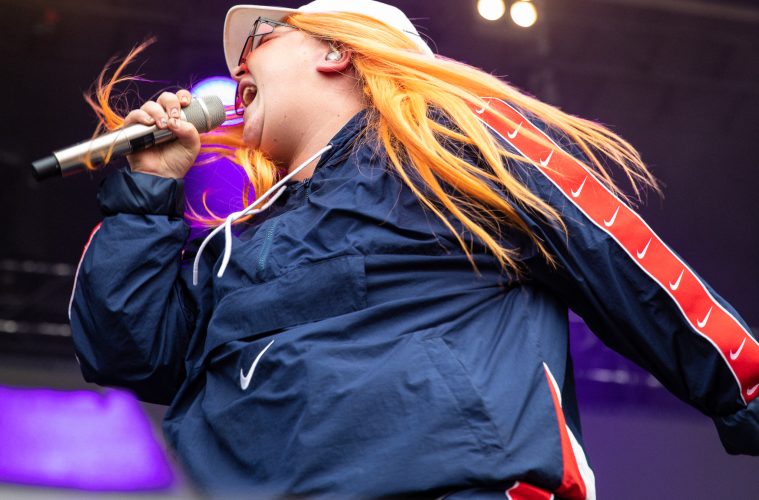 View our full gallery of the festival here.

There’s something interesting about thinking you arrive at an event you’re covering late, only to realise you’re about forty minutes early. Or maybe there isn’t.

Does it even matter?

Due to some rearranging, 100 were the first band to hit Laneway’s stages. Having to warm up a small crowd, they put in a good bit of energy, though seemed small on the stage.

100’s post-punk sound was loud, biting, aggressive and big. Whilst owing more than a debt to the past, overall they were fun. However, they might’ve been a bit too much for kicking off the whole event.

Kučka followed with a calmer, electronic-based set that felt a lot like motion. She was willing to let the music happen and made great use of spacing between her vocal lines. Whilst she indulged a little too much in explanation, the growing crowd remained appreciative throughout her performance.

It wasn’t long before Spacey Jane took to the stage and played a set that was appreciable both standing up and sitting down. They were loud when necessary, and in general sounded really fun. It was during their set when the crowd seemed to really start getting into the music, as they overtly reacted in the positive to the band’s performance.

Pist Idiots played what felt like a blend of classic rock, punk and indie. Their jangly, noisy and energetic sound, as well as their sometimes yelled, sometimes somewhat-spoken lyrics made for a great singalong band.  Their set felt intimate which suited their being on the Future Classic stage.

There was a partial attempt to emulate Freddie Mercury’s Live Aid call & response which seemed to fall flat, but otherwise Pist Idiots delivered.

For some reason they reminded me of The Presets, which lead to me remembering Shiny Toy Guns. I don’t know what it was, or why, and I had no desire to pursue the thought train any further and so it went by the wayside as I headed somewhere else.

JessB gave what I felt was the first great performance of the day. To a criminally small crowd, she and her band pumped out tightly-performed songs. Her rapport was as great as her flow, and she looked like she was having a a lot of fun. At times the set did get a bit too bass-heavy, but otherwise JessB captured the spirit and feel of a great festival set.

The Chats‘ set started with a few seconds of “Gonna Fly Now”, which didn’t do much to represent them. However, considering the band’s flippant-sounding punk, this was likely an ironic critique of audience expectations; people get the implication of some dramatic underdog experience and instead get the shoutiest, yellingest band of the day.

Their songs were fast; their energy as great. They played hard and they delivered to a satisfied audience.

Benee had this kind of pop / funk thing going on, with a thumping, punchy sound. Her sound and set worked well for Laneway, being smooth, easy, and both relaxed and energised. Benee weaved her vocals around the beats with ease, and her performance overall was passionate and joyous.

Tones and I‘s set was a mix of various forms of pop. It sounded mostly quite upbeat and fun, though the sound balance hampered it in a few places. In conjunction with a great vocal delivery, she easily able to entertain her audience.

Whilst at times there was over-explaining, the discussion of bullying remains important in this day and age.

Once “Dance Monkey” began a lot of people seemed to come out of nowhere in order to flood as much of the space around Tones & I’s stage. It was a shame as they missed the best and most dramatic-sounding parts of her set, but at least they made it for the popular song.

Last Dinosaurs had their audience dancing a fair bit with a sound that held a good punch. With a set owing more than a debt to the past, they sounded slick and energetic.

Now I don’t know if this was just me, but I need to mention that the way Last Dinosaurs’ vocals sounded physically hurt. I don’t know why, but it did which

Hockey Dad brought a loud and loose, yet tight sound to the stage. If they were metal, they may have been of the sludge variety. That’s not saying much, but suffice to say that they had a bouncing, energetic crowd taking in what was great fun coming from the stage.

In comparison DMA’s felt like a standard festival band. Aside from the (thankfully brief) “Never Gonna Give You Up” karaoke, nothing really stood out as particularly good or bad. Whilst their audience appeared quite restrained, they likely were enjoying the performance.

Mahalia gave what I felt was the second great performance of the day. Soulful, snappy and clever, her powerful voice mixed with her music and commanded the audience’s attention. She had excellent stage presence to match the music and overall just kept on delivering without any weak points.

Mahalia’s set was just great all-around. She should’ve been on one of the main stages.

Likewise Hatchie, who played a wonderful blend of dreamy, poppy, textured sounds would’ve worked on a main stage. Sometimes she went more for the dancy stuff; sometimes the cinematic. Either way, Hatchie’s audience were were more than happy to have the music wash over them.

Whilst it felt like her set was louder than necessary, it was a pleasant experience.

Cub Sport‘s set of dramatic pop worked well against the backdrop of the evening rain. Sometimes they sounded mournful, sometimes they didn’t, and overall they were quite classy and well-presented.

When King Gizzard & The Lizard Wizard played, it was difficult to tell as to how much the crowd was feeding off of them. Perhaps it was a lot. Perhaps it was not much. That said, their seeming intent to put on a show of journeying music alongside a fantastic spectacle was welcome.

Whilst loud and elated at first, Charli XCX‘s audience often seemed muted in their enthusiuasm. It’s likely that the rain put a dampener on the festival’s attendees as Charli put on a fantastic performance. Her songs and delivery was strong, and her powerful stage presence complimented the music.

There were few pauses as Charli ploughed through each track, giving it her all to make sure her time on stage was worth the attention, and indeed it was. Not a dull moment, nor a lull came from her.

It was the nostalgic “1999” that saw the audience seemingly perk right up, and see. If there was a right time, it was then as soon the set would draw to a close. It felt triumphant.

After Charli XCX wrapped up I headed home. Whilst desiring to see Earl Sweatshirt, his delayed set meant keeping the travel time took precedence. Still, I felt that my Laneway 2020 experience ended with the right performer and got to leave feeling satisfied.

The weather was unpleasant throughout most of the day. At the start it was hot and smoky. The air felt dirty, and being away from shade was undesirable. When the rain arrived it provided welcome relief, but its nigh-unrelenting ubiquity meant it too became unpleasant. Everyone had to deal with it, and many did. It seemed as though a number of people didn’t, however, and instead left early.

It’s hard to tell as to how well the layout at The Domain functioned. Whilst there were some issues with Laneway’s layout last year, most of it worked well due to the looping design. The Domain’s vaguely crescent-shaped layout didn’t make for easy navigation past the main stages once the glut of attendees arrived. Now admittedly it was only a few minutes to either end, but if this is the setup for future festivals, then perhaps reducing the size of the over 18’s area by a few metres could alleviate the issue.

It also didn’t help that The Domain is less interesting a location than Sydney College of the Arts. There’s something really appealing about seeing artists perform among a beautiful set of architecture that The Domain can’t quite capture. Another thing The Domain didn’t handle well was the sound from one stage bleeding over to another. However, The Domain has more public transport options and frequency. Ultimately The Domain as Laneway’s location felt like a weird trade-off possibly related to the festival’s growth. Hopefully some sort of middle-ground is available next year.

Whilst waiting for The Chats I decided to get some food as it seemed like a good time to eat.

Well, I went for a lazy kebab and to be honest it was far less lazy than I was. I spent more time waiting in the line than I did waiting for the food, which was ready within a minute; or, at least around a minute.

I felt like I cheated myself. The kebab was fine; it had a good balance of ingredients and went down really easy. However, I was hoping for something filthier. I wanted to feel lethargic after its consumption and instead I felt satisfactorily filled.

Considering the heat at the time what I got probably was better for me.

I feel as though I should have gone for something else, however. There was (as far as I was aware) a small, yet varied range of food available and most were within short walking distance from any given location. At the time it was easier and less time-consuming to go for the kebab though.

Often it was easy to find a toilet which were mostly in obvious locations. It seemed like there were more than last year which, if so, was a great boon to attendees. I’m not sure about the access to drinking water. I didn’t have much trouble finding access to refill areas, but at the same time I didn’t see many.

I feel as though the organisers should have taken a few more risks with some of the acts on the main stages. Maybe they did; I don’t know. There were times where it became apparant that a few of the performers on the side stages could’ve brought a lot more to the festival if they were on a main stage. More side stage acts that gave great performances than those on the main stages which saw some performances that were lacking.

The side stages had another advantage of the main ones: shade.

Shade was in greater supply this year, though it was mostly around Laneway’s sides. It meant that getting a break from the sun and relaxing was easier as shade was within short walking distance at any given time. It was easy enough to get away from a main stage and see someone on a smaller stage without feeling drained.

This year’s Laneway Festival had some issues, but overall it’s hard to deny that it was enjoyable.