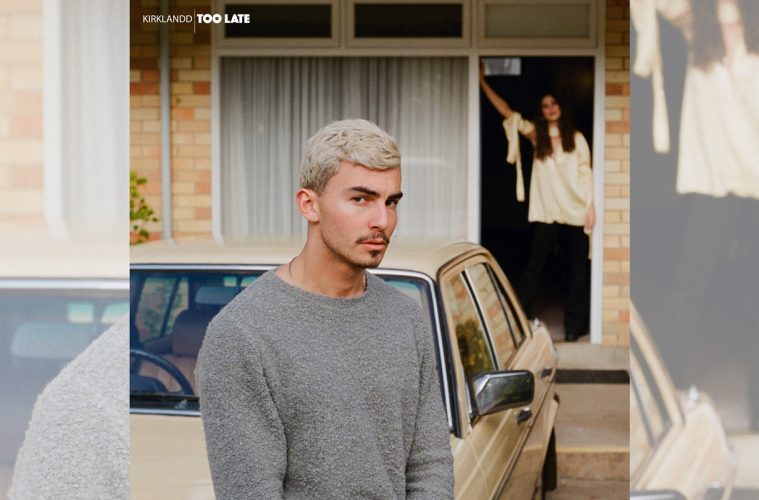 A bit of the shimmery vocal stuff, then that plucked guitar string stuff that gives a sort of “folksy” appeal. That’s a terrible sentence, but you get the idea.

“Too Late” sounds a little more aggressive than the prior-two of The Love Divide‘s released tracks, but only in terms of sound. It’s a bit more nakedly reflective and in general appealing. Kirklandd sounds much more comfortable with the delivery; as the vocoding isn’t smothering everything he sounds more heartfelt and emotive.

The song sounds rather emotionally open in a sense. That’s not to say that The Love Divide‘s songs are any less so, but the “cleaner” sound of the song helps to reveal the emotions much more plainly. This is fairly straightforward stuff, so being able to hear the vocals as they are allows much more of the mood and emotion to come through and match the music in a better way.

The instrumentation is pretty straightforward; Simple guitar, occasional choral-type vocals, calm synth and a pitter-patter beat that nudges the whole thing forward. Sounds mute and fill out space when necessary and never reach exuberant levels; there is energy but it’s just enough to give the song what it needs. In turn Kirklandd’s voice gets good support. He has a frame to build off; a frame that keeps its melody nice and easy, giving something ear-pleasing to bop along to.

As far as comparison to the other two songs of The Love Divide go… this one is more of a “banger”. Probably. Whilst “SIIYE” is more interesting, “Too Late” is far less hackneyed than “Feel Alive”. “Too Late” also feels much airier and lighter than the other two songs. It’s still quite serious (or at least it sounds as such), but it’s much more at ease with itself. The music glides, as does Kirklandd’s delivery. That said, the songs do work well enough with each other than they do separately. There’s a better sense of connect between them that helps them flow from one another, as well as a better idea of how the emotional content works in that continuous flow.

With the release of The Love Divide as a whole rather than a segmented series of songs, there comes three additional tracks which may or may not function as interludes. It’s nice to have “The Divide” kicking things off. It helps to give “SIIYE” a sort of fade in before it starts in the sense that the song is kind of coming out of something formless. “The Climb” is a bit more out of place, though its “slightly off” feel is interesting as it suggests a kind of imbalance, or perhaps trying time. It doesn’t connect to “SIIYE” or “Feel Alive” as well as perhaps it should though. “The Return” similarly does not feel too connected, but it does feel more fitting; at least, based on its following from “Too Late”.

It’s also nice that the spoken words during these small bits help to add a bit of shape and context to The Love Divide that may not have been there otherwise.

As a whole The Love Divide works. It takes a dip in the “middle”, but it works. The songs work better with each other and it’s all nice enough. Some of it shows potential to grow from. Where issues arise is where there’s leaning too much on vocoding as well as common melodies. Whilst they provide something, it’s difficult to see what they add to what Kirklandd is doing. Still, it’s an enjoyable enough EP.

The Love Divide is available here.