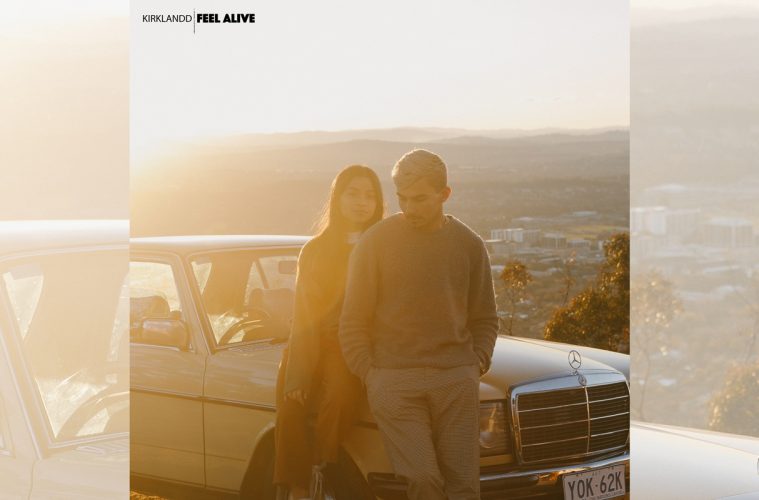 “Feel Alive” is the second song of Kirklandd’s The Love Divide. It has a laid-back feel and a driving, flowing pace based around an overly-familiar melodic pattern that helps enhance the song’s moodiness. Instrumentation remains light with focus bass and percussion. Among other sounds there’s some quiet guitar and muted synth, but it’s the bass and percussion that takes charge.  Much like “SIIYE” there’s space, but this one is less sparse.

Kirklandd’s delivery goes for something a bit more soft and perhaps romantically suggestive. In the verses more of his voice is naked, giving the words more of a sense of closeness; The vocoding is there but in a diminished capacity. There’s still a sense of disconnect but it’s much more in the background, leaving Kirklandd’s voice to reach out and express more easily. On the lead-in to the choruses (as well as the choruses themselves) the vocoding increases in prominence. It smothers the emotional qualities the vocals provide which is a shame as it’s clear Kirklandd does better letting more of his voice come through.

Through the words expressions of (perhaps) self-loathing, addiction, dependency come forward. There’s also a strong sense of passion and enticement. Due to this it’s a bit hard to tell what exactly Kirklandd is trying to get forward. On one hand the lyrics create a sense of confidence; On the other, there’s a strong sense of desperation. However, it’s difficult to fault how direct and open the lyrics are without them sounding uncomfortable. It’s easy enough to do something with a sense of exposing yourself and have it sound uncomfortable, so that the words aren’t is a big plus.

Without the context of the entirety of The Love Divide, there’s not really much else to say about “Feel Alive”. Compared to “SIIYE” it’s more overtly melodic and perhaps more emotional. It’s also mcuh less interesting. The vocals carry pretty and match well with the music; Overall the song sounds like it moves at a smoother pace. “Feel Alive” follows “SIIYE” nicely; it sounds like it belongs in the same realm and it’s a tightly-structured song. However, it’s too willing to rely on familiarity over Kirklandd’s artistic voice. That all said, it’s not a bad song.