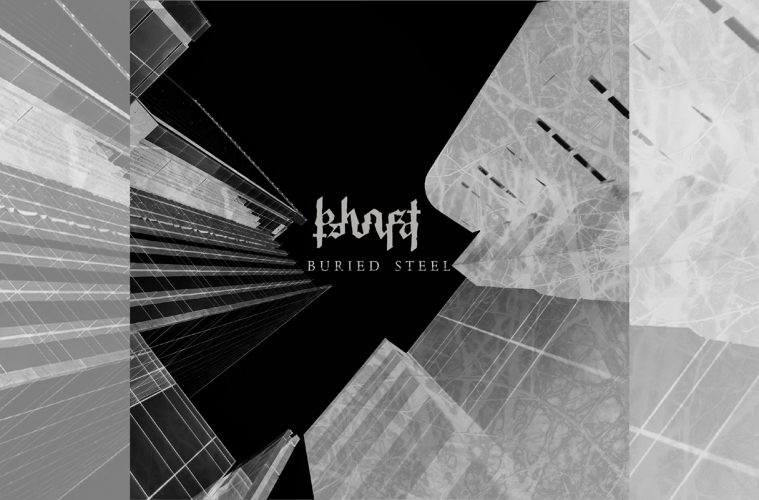 Buried Steel is an album full of sound and intensity; Cold guitar and bass grinding away, and harsh vocals and various auxiliary sounds fed through a bent toward creating an immense onslaught. In some places the album becomes (comparatively) quieter, but often it’s quite loud and full-on.

There’s a bit of playing around with the sound whilst keeping the album rather familiar to itself. Opener “We Will Win” is somewhat-straightforward (relative to the rest of the album) in its flow and sound. It carries a more direct sense of aggression than most of the other songs and pushes on forward with a great deal of force.

“Intravener” takes on something more dance-like and rhythmic in approach whilst keeping the chorus prominent and distortion at the forefront. “December Bureau” is kind of compressed in sound (so to speak) which (in a way) gives the song a bit more clarity, as well as more of a sense of the unnerving. It keeps things thoroughly fuzzed out whilst remaining slow, spacey and menacing.

The first part of “Dog Unit” is as melodic as Buried Steel gets. Through the noise it holds a sense mournfulness that stretches out. Eventually the song sequestrates itself into the doom hole with all the crushing weight that Khost can muster.

The album holds a few spoken word tracks regularly delivered in a matter-of-fact manner, as though the narrators are talking of everyday occurrences. At the same time they describe events in a “specifically vague” and suggestive way. Along with background sound a sense of unease comes forward, as though there’s something fundamentally off with what the narrators talk about. On one hand these sections help to give a bit of breathing space between the louder stuff; on the other, they help preserve and transform mood and atmosphere without harming Buried Steel‘s flow.

When it comes to closing the album, “A Non Temporal Crawlspace” is an interesting choice. It is a bit glitched out and has one last gasp of noisy aggression, but closes things comparatively quietly. In a way it feels a bit disconnected in a way that “Two” (the last spoken word track) doesn’t, which may have made a better closer. That said, “A Non Temporal Crawlspace” provides the feeling of a different kind of urbanity compared to the other songs; that of (perhaps) desired illusion of something greater than one’s situation. It also follows “Two” well, and doesn’t take much away from Buried Steel‘s overall feel.

However, this also depends on how much you consider “…Temporal…” to be the album’s final instead of “Intravener In Dub (Mothboy Remix)”. Whilst viewable as a bonus track “Intravener In Dub…” fits the album well. It carries on a sound similar to the two previous tracks, making “…Temporal…” fit better with the other tracks. It also twists “Intravener” around enough to be its own thing; It’s more spacious, transitional and stretches out the original’s sounds whilst adding some of its own. The song also retains a sense of vague familiarity, keeping it attached to its original form without being too reflective of itself.

There’s a strong sense of the urban on Buried Steel. Perhaps it’s the spoken narratives. Maybe it’s the cold, industrial and clangorous feel of the whole thing. Regardless, whilst the album is a lot to take in, it provides a thoroughly engaging experience.