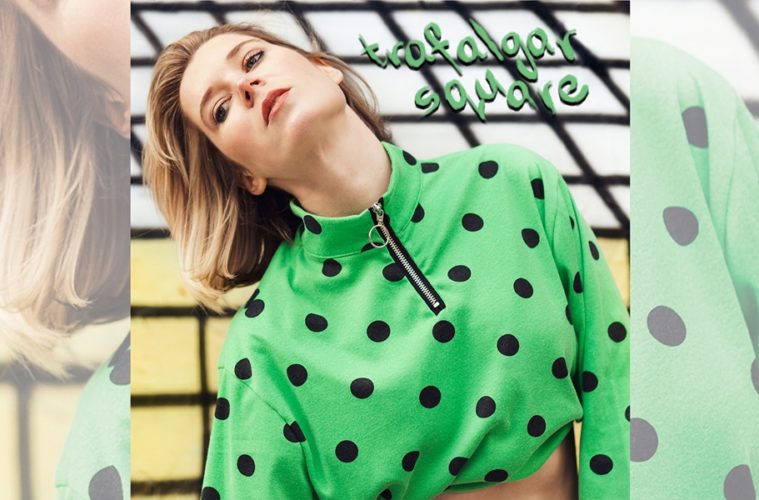 Karmel Jäger‘s gone from classic to electronic. I don’t know how she sounded before this shift; I do know that the song  follows the vein of music referred to as “electronic dance music”. Maybe it’s “electronic body music”.

“Trafalgar Square” is a song that refers to Trafalgar Square quite regularly throughout its run-time. It is a song from Karmel Jäger. In this write-up, what follows are a number of words regarding the song.

The first thing to get out of the way are the vocals.
Karmel’s strong delivery gives the lyrics a great deal of credence whilst avoiding going over the top.
There’s a strong passion and sense of longing in her delivery of the lyrics which is appropriate as it seems that the lyrics pertain to a sense of longing.

The protagonist (I’m guessing Karmel) in the song goes through a conflict between heartbreak and desire. In those two states there’s an inherent sadness throughout “Trafalgar Square”. Trafalgar Square itself seems to serve as a key point to revisit; a place of a happy memory that no longer seems achievable in the protagonist’s desired way.

The song works well enough, but the mix on the vocals doesn’t quite fit. The way they are makes it so that they don’t sound as full as they should. There’s a slight disconnect between the mix on the vocals and the mix on the melody which undermines the vocal delivery. That said, the occasional effects (especially the staccato toward the end) does make for interesting variations.

“Trafalgar Square” is a pretty straightforward song. The song doesn’t do much to deviate from yesteryear, but it works nicely as it is. A better mix on the vocals would be beneficial, but their strength still comes through with ease. The vocals carry emotion well and don’t come off as forced.

Overall “Trafalgar Square” is nice enough and makes for an easy listen.