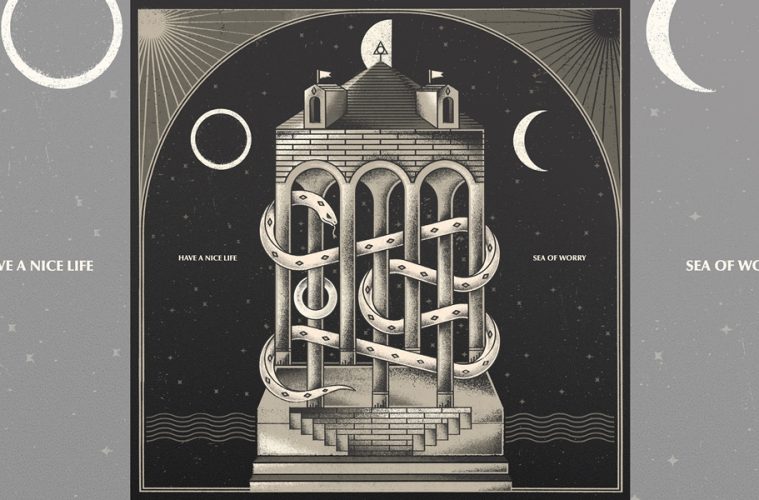 Have a Nice Life: Sea of Worry

Somewhat-recently Have a Nice Life released Sea of Worry, which is an album title that succinctly encompasses the album’s mood. There’s a strong sense of anxiety in the songs that doesn’t let up; not even in the more upbeat-sounding songs. Whilst this doesn’t make for the happiest-sounding album, it avoids diving headlong into misery. Sea of Worry is more about expressing its unease than it is about overwhelming the listener, and it does so in a couple of ways.

Due to a great deal of reverb, Sea of Worry has a roomy, distant sound. The reverb makes a lot of the lyrics ambiguous, leading to the sound of the delivery becoming more prominent. What lyrics are clear strongly suggest unease; those that aren’t still suggest through their sound rather than their words.

Often the songs are cold, jagged and noisy with an undercurrent of urgency running through them. There are times when the the sound lets up a little, but it never fully does and instead seems to lurk at the edges of the calmer songs. That said, there’s also a feeling of comfort that comes through, albeit in a more minor capacity.

There’s a surface disconnection between some of the songs, but upon repeat listens it’s easy to see how the rock of “Tresspassers W” fits in between the poppy, synth-driven “Science Beat” and the ambient “Everything we Forget”. “Sea of Worry” and “Dracula Bells” are probably the most familiar with each other, but also link smoothly with “Science Beat” in that they seem to inhabit a similar world, so to speak.

“Lords of Tresserhorn” is similar to “Tresspassers W” by recontextualising the rhythmic pattern into a form of catharsis. “Destinos” follows as a dramatic closer that uses its noisier elements to give it a more massive sound.

Normally music that sounds dramatic or highly emotive takes a lot to pull off. It often requires a lot of work; something that many bands don’t seem to realise. Sea of Worry sounds like Have a Nice Life put a lot of work into it and it pays off. There are some issues, such as the album at times coming really close to sounding like artists from prior decades as well as some sections wearing out their welcome, but otherwise the songs are worth the time.

There’s a certain something about Have a Nice Life’s music that, whilst difficult to describe, is part of what makes what they do work. However, that doesn’t feel like it says much.

A better way of putting it is that with Sea of Worry is a moving record.

Sea of Worry is available here.