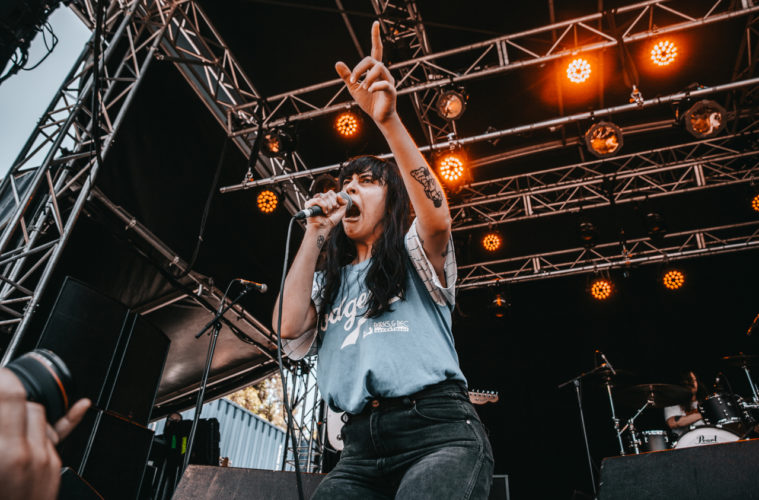 I’ll get the conclusion out of the way:

Good Things was successful. There were some issues and some bands were better than others. However, the whole day was enjoyable which is what matters.

Ecca Vandal were / is a real highlight to see.
Their bass-heavy set had a great deal of menace, but still sounded and felt fun.
It was a noisy, energetic set put on people who were clearly confident about what they were doing.

Northlane sounded quite muddy, but their sound managed to push through. Among the screaming there were big melodic moments and a number of staccato-based structures applied well. Whilst their desire to put petrol prices up 5c a litre through pyrotechnics was disheartening, Northlane weren’t afraid to be abrasive or dominate the stage which lead to an overall satisfying performance.

The Wonder Years did a good job of whipping up the audience.
Their anthemic punk had the crowd singing along a number of times which fed into the performance. At one point the frontman mentioned that the band were in Australia for the second time a death-related incident was occurring overseas. He then thanked the audience, leading to The Wonder Years playing a song about the passing of a loved one. The gratitude and emotion felt as genuine as their performance.

La Dispute were an interesting choice.
Among their set was semi-abstract, angular riffing, a bit of funk and something that sounded like bluegrass. Their sound was clear and they didn’t always go for the big ending; nor did they go for maximum energy at all times. Essentially they were somewhat-different from a few of the other bands and stood out really well.

Babymetal also brought something a bit different to the festival.
On a strictly personal level, I didn’t enjoy what I heard.
However, I do think that they did put on a strong set. The metal / J-pop blend worked really well, and the juxtaposition between J-pop and metal performers wasn’t that jarring.
Seeing a band explore musical boundaries in this manner and do it well was something that I really appreciated.

Scarlxrd played a really aggressive, heavy set. It reminded me of I Set My Friends on Fire covering “(Crank That) Soulja Boy”. That aside, Scarlxrd raps really well, and both he and his cohort were physically frenetic. It was an interesting performance that was slightly sullied by the decision to do shoeys. Even though Scarlxrd used water, as a friend put it, at least with alcohol some of the bacteria would have been killed off.

Bullet for my Valentine are a rock band.

Dropkick Murphys were a strong highlight of the day.
They clearly knew how to be a good live band.
Displaying the right blend of punk fun and punk fury, they whipped the audience into a frenzy.
They were tight, expressive and did little else than deliver song after song with ease and enthusiasm.

Dropkick Murphys were another band that verbally expressed gratitude and appreciation for being in Australia, and once more they were a band that felt genuine in that expression. It was something that they didn’t need to say as it was so blatantly evident in their entire performance.

All Time Low played a set full of soaring, melodic pop hooks. They knew when to be anthemic and when to soar. They payed a set very much focused on being crowd pleasing and overall put in a decent performance.

Comparatively Stone Sour sounded heavy and furious. Their performance had a fair bit of aggression to it, but there was a peppering of melodic hooks and glorious cheese. Of note was the hard-hitting drummer who sounded like he was pushing the other band members to go harder than they were.

The Smith Street Band had a pretty good cycle of calmness and energy.
Their sound was easygoing with a good number of singalong moments.
The singer wasn’t the greatest and he didn’t need to be. He knew his limitations and worked really hard within them, leading to a really strong vocal performance.
The band was in top form and felt like they were on friendly terms with the audience in a way that most bands don’t. It’s fair to say that they were a really welcoming band.

After finishing Smash and a brief break The Offspring came back on stage to perform a few more songs. At this point they seemed to become a livelier band as they knocked out song after song with much aplomb. It would have been nice to hear them perform some of the lesser-known songs from their catalogue. However, the songs played went down really well.

The rendition of “Gone Away” was slower and quieter than on Ixnay… and did well to break the set up a bit, although it did feel a bit odd.

Overall The Offspring’s set was a good way to end the festival. Tony Kanal did a good job of filling in for Greg K. Noodles sounded good. Each member seemed to be having as much fun as the audience.

Building upon that, many of the bands had sets that could be described as interchangeable. I was glad that I was taking down notes whilst I was there because I can’t remember who some of the bands were or how they sounded compared to other acts. There’s only so many times a big rock ending can hold interest before it starts losing its appeal. That said, the quality of sets was still quite high and the audience was overall appreciative.

The time to leave the festival was slowed due to having only one exit. Whilst the exit could have been wider, this wouldn’t have done very much. Instead, having multiple exit points over a particular section would work better. The main issue as to why it takes a long time to filter out of an exit is due to everyone moving toward the same exit. Having multiple exist would mean that the crowd flows much more smoothly.

Being within a ten to fifteen minute walk from a train station was great. It was really nice to be able to get home easily and not require a car. Sure, it would have been nice to be closer to a station, but it was an easy walk and it was closer enough.

Perhaps there needs to be additional shade options next time. There was shade available and it was plenty, but sometimes the only option was to stand.

The layout of Good Things was excellent. Having all the toilets, food and most of the free water in one location was good. Having these in the rough centre of the area was even better. The layout and setup allowed easy crowd flow around the festival grounds, and it was easy to remember where everything was located.

A lot of dirt flew up like dust around stage 1 and 2 due to the masses of people and the dry weather. Considering how far in advance a festival needs to book a space, this is something that probably couldn’t have been avoided. This is purely from a point of view with only partial information, but I think it would be pretty cool to see festival planners work with scientists in the future to work out where an optimal place to hold a festival would be.

Due to issues with rain Parramatta Park was very dry. Due to losing ground cover quickly, there was a lot of dirt getting into the air. If held at an area that is less likely to be dry, then there’s less of a chance of getting dirt flying everywhere.

However, this then poses another issue of making sure that everything is convenient and that you’re not imposing on residents, or native flora and fauna.

Furthermore, people were more than willing to spend what is not exactly a cheap amount to come to this festival. It could have been cheaper, but considering how many people showed up and how many were clearly enjoying it sends a strong message.

Also, even though the tickets were expensive, twenty-four bands for less than $7.50 per band is, as far as I’m concerned, pretty good. Sure there are probably plenty that many wouldn’t want to see. There’s also a number of bands that I’m sure a number of people got to discover and appreciate.

I know that that was the case for me.

As I said at the start, what matters is that Good Things was enjoyable.

I think that Good Things was important and to say that it was overall a good festival doesn’t say much. The festival means a lot more than just a music festival, especially in Sydney. I don’t know how it is with other states, but we’re seeing a number of venues close down and the promoted attitude toward festivals hasn’t been a positive one. Good Things looked like it was a success. I can only hope that it was as there was strong interest from Sydneysiders. That we lost a number of festivals in short succession was a real shame, but then to see this one as received as well as it was is a clear statement.

I can only hope that we see it return.

Our galleries for Good Things can be found here and here.