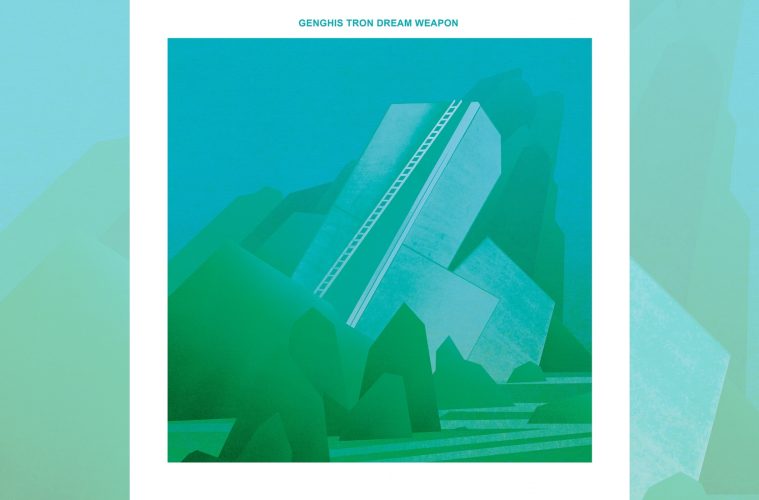 Alright, so you’re Genghis Tron and you release Board Up The House, an album much-vaunted for its blending of electronics and extreme guitar music. It’s an interesting relation to be in, what with it considered as definitive of your sound. Maybe you feel it’s not your peak; There’s satisfaction with the work but maybe you feel there’s plenty more room for growth.

After a tour you go into hiatus for a while. Eventually you return and, with a change in lineup, announce that you’re working on new stuff. Eventually you announce the upcoming release of Dream Weapon, and to give people a taste, you release one of the songs, which in this case is *checks notes* “Dream Weapon”. It’s different, but it’s still familiar enough to acclimatise listeners before they hear the rest of the album. Sure it’s less aggressive, but it’s still Genghis Tron.

So Dream Weapon begins with an introduction. Surprising I know. “Exit Perfect Mind” is rather easing, dreamy and welcoming, but not so much as to lull into a false sense of security. It should make it apparent that the album is both different and familiar to Genghis Tron’s previous work. If it doesn’t, then “Pyrocene” casts aside any lingering doubt.

Things go up a few notches. There’s more energy and a big beat. Synth implying some sort of menace. Vocals come in, sort of stop-start-like and then what is likely an approximation of a chorus comes and the song kind of glides. It’s much more melodic and less menacing than initial implications. Very electronic and very live in feel; also very calculated. The vocals sound detached and ready to drift away whilst the instruments congeal together and push the song forward; It’s not menacing, but it feels grimly mournful.

“Dream Weapon” follows and it’s this furious, almost blistering song with vague, terse lyrics that hint at something likely ominous. It shifts gears for its mid-section, whilst retaining the same sensations from earlier. Genghis Tron lock down on the groove they’ve got going, slowly letting it unfurl whilst percussion gradually gets busier. Eventually they break out and step out for the obligatory big ending, though that sells it short as it feels quite earned and fitting. Having enough familiarity whilst being firmly looking forward makes it a welcome inclusion, but over repeat listens it feels a bit like a compromise.

After “Dream Weapon” “Desert Stairs” feels like a reprieve of sorts. Like “Exit Perfect Mind” it eases things up a bit, is dreamy and welcoming. However, it’s more warm and gently washes over and around; more peaceful in a sense.

What comes next is “Alone In The Heart Of The Light”. This one sees Genghis Tron moving more firmly into the electronic side of things. It starts with a beep signalling something of into space; it’s not long before the floaty vocals and punchy, steady percussion enter. Eventually the song sort of shifts through a few different phases, perhaps as though it’s trying to be some sort of low-key cosmic thing whilst retaining a sense of the grand. Various lyrics softly appear throughout like a brief flash of detail left behind as the song moves forward. Eventually, after all the building pomp and bigness the song pulls back, leaving focus on the last few words of a chant that had been running through roughly half the song. It grabs attention in a way that feels like a scramble to catch important, yet fleeting words.

“Ritual Circle” is sort of more of the same, though feeling more grounded and arid. In a sense it’s also a bit more hesitant. For a good part of the song Genghis Tron do the “This is the cool, quietish build thing before we throw the cool, louder stuff at you”. As if on queue, that’s what happens and this sort of dark, stained-glass counterpoint bursts through with all the dramatic light it creates. It’s a really tense, ominous section that hits hard. For a moment it seems the song is going to end in an explosive assault, though it doesn’t and instead the aftermath comes in and this rocking beat comes through. It feels like a long, slow and enclosed jam; Whilst unexpected, it remains familiar and in a way makes the song feel more like its name.

“Single Black Point” brings more guitar in, but as more of a percussive sound. Once more there’s a sense of jamming, but it’s much more pointed. The way the song builds is as though looking to solidify a dark period of time. Eventually sounds start to pull back and the song ends in a way that feels like it’s disintegration. It’s a moment that feels ruminative, and starkly despondent.

“Great Mother”, provides a towering, monolithic conclusion to Dream Weapon. It’s sort of in the vein of some prior tracks, but it’s slower, more menacing and much more bleak and harrowing. It ebbs and flows really well, and has this kind of “off” groove so to speak. Once the song ends on its last grim moment, it shimmers off into space before blinking out entirely.

At times Dream Weapon feels like testament to aesthetic as a way of expressing in a whole form. Just about everything has a synth tinge to it and many of the songs have this detached, yet utterly close feel going on. The vocals often feel like a distant sound more than they do a voice; Words come through, but not always with clarity. Considering its name it would be easy to describe the album as dreamy, but it’s more of a suggestion of a vague drift.

I’ve read that Dream Weapon is a rumination on human life and its impacts. Many of the lyrics hint toward this, but the vagueness can make it unclear. In that regard, maybe the way the album sounds and feels references getting trying to get information across and its reception as it often feels like Genghis Tron are, with a sense of urgency, trying to meaningfully reach out.