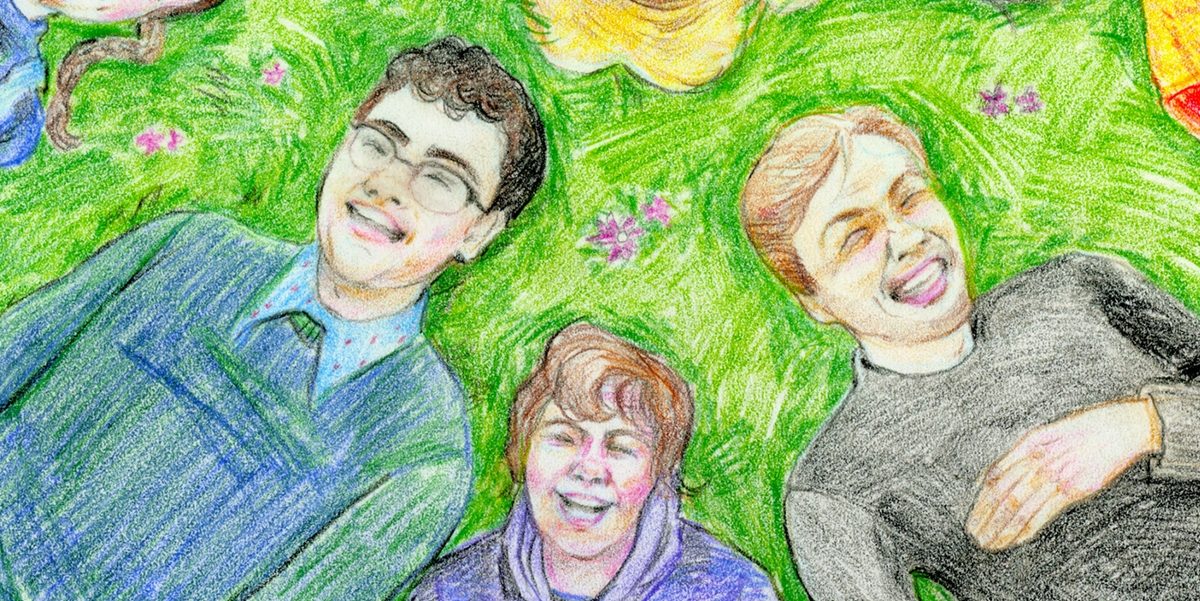 Geez I loved the Baby Sitters Club books when I was growing up. I probably loved them a little bit too much to be honest, I have vivid memories of refusing to spend time with real human people in favour of reading more BSC. Good times! Being the podcast junkie I am, it was inevitable that the search terms ‘baby sitters club podcast’ were tapped into the google machine – I swear half the podcasts I listen to satiate my need to affirm that what I loved as young person, was also loved by many others.

From what I remember, the Baby Sitters Club Club was not only the first result to appear, but the only one, and the podcast itself was not even close to what I had expected in a BSC podcast. I had more or less assumed that any BSC podcast would be captained by some women my own age who loved and related to the series when they were pre-teens, as I had, and discuss the impact the books had on them. Bad assumption. The BSCC is hosted by two straight dudes; Jack Shepherd, who first found the BSC series when he migrated to the USA from England as young boy, and his bestie Tanner Greenring, who had never picked up a BSC novel before starting the pod, but thankfully agreed to discuss the novels for (what would become) a global audience.

Kicking off in March of 2017 with BSC #1 Kristy’s Great Idea, Jack and Tanner are fast approaching the end of the series, as of this writing the boys have just released the episode for the #126th book in the series, bringing us ever closer to book #131, the final BSC book, where it will all end (in fire).

As an active member of Baby Nation (aka, the lovely community of fans of the BSCC) I just had to find out what was going to happen once our beloved boys finished with series. Many ideas have been suggested (ok well not many, it’s just all of us yelling at our beloved hosts to do the fucking Super Specials), the guys have tried some different things here and there – but I really had to know. So, I caught up with Jack and Tanner to ask just that! We also had some chats about the early days of the podcast, almost meeting Ann M Martin, the deep and dark worlds of BSC sub-text and, of course, Blizzard Games amazing team-based FPS, Overwatch.

When we talk it’s early morning for Jack and Tanner. Jack is feeding his baby boy / occasional BSCC guest, Cyril while getting ready for work (both Jack and Tanner work for Buzzfeed) and Tanner informs us that, in true crime-boy fashion, he is skipping work today to attend a bachelor party!

Culture Eater: Tanner, I just want to get this out of the way, it’s not important but you mention it quite a bit on the show and I really want to know; In Overwatch, who do you main?

Tanner Greenring: I like to play a random selection of characters, but if I do main someone, it’s Lucio, I’m bad at shooting things and I like to rollerblade around.

Jack Shepherd: I didn’t understand a word of that…

TG: Jack, who do you main in Overwatch?

JS: **while clearly googling** Oh uh yeah, I guess I would say, the guy with the axe.

JS: Yeah, it’s because he’s the highest degree of difficulty and you know I’m just such a gamer.

CE: And what is that character’s name again?

JS: Yeah, us gamers, we know our shit.

TG: The only game Jack’s ever played is Zelda. Oh, and Tecmo Super Bowl.

CE: If you guys decide to do more of the Worlds of Power books, you might have to amend that, whip out some of the retro stuff.

CE: Hahaha what the fuck!

TG: We should do all of them.

CE: It’s pretty crazy that there’s this author cross-over from BSC to something pretty niche that you’re into Tanner.

TG: Yeah you realise how small the world really is, or how small the world of kids publishing must have been in the 80s and 90s. There was just like, a handful of children’s ghost-writers and they were just be-bopping all around and working on whatever projects came across their desk.

TG: I’m sure there’s an alternate universe where people are talking about Pete and Ellen writing for Worlds of Power and their minds are blown that they ever wrote for the Baby Sitters Club.

Jack takes a sip of his drink, Tanner compliments him on his MongoDB mug. I ask what that means and Tanner explains it’s database software they used to use and says Jack must have stolen it from the office about 10 years ago. I’m a tad underwhelmed at the mug but the mention of ’10 years ago’ triggers my memory to some 2008 vlogs I came across on Jack’s YouTube page.

CE: I was actually checking out some vlogs that you put up around 10 years ago Jack, and they’re truly a gift from the heavens!

JS: Oh haha which ones did you watch?

TG: I’m delighted to know this! Jack what’s your username on YouTube?

JS: You’ve never taken an interest in this before Tanner.

But let’s not get distracted….

CE: Ok we should talk more about the podcast now.

CE: Jack, when you guys first started the show you used to talk a bit about how you found the BSC novels as a young boy after moving to the USA from England. What appealed to you about the books back then and why did they stick with you?

JS: It was true of both Baby Sitters Club and Sweet Valley High, though more BSC. I think I was pretty attracted to just how freaking many of them there were. My cousin had the whole library, like every single one of them. There’s something cool about the collectible nature of it. I’d also say that it’s true since then, that every time I’ve brought it up with someone, it always brings a smile to their face. People have such a strong connection to those books and it’s something that, weirdly, has come up a lot since then. So, there’s a community of people who grew up with it and it’s just such a strong point of connection.

CE: Is that one of the reasons you wanted to do the show about it, knowing that there was a community of people out there with that connection to the books? You guys really have brought thousands of us together.

JS: I’m trying to remember, Tanner did you think anyone was going to listen to it?

TG: We both worked at Buzzfeed and we were originally going to do it for Buzzfeed. We’d just launched a big podcast division and we were experimenting at the time and we just thought “ok we’ll just do shows about whatever!” Like the two of us goofing off at work together, sure we’ll do a show. The very first pilot we recorded was recorded at the studio at Buzzfeed and there’s an extra character on it called Producer Julia who was our podcast producer. So, we sat on it for a while and felt like it was more of a personal project, we don’t want Buzzfeed to have to worry about this or spend resources on this producing it. We ended up just taking it away and started doing it ourselves as fun and as an excuse to hang out.

CE: And Tanner, did you have any history or interest or interest in the BSC before doing the podcast?

TG: **laughing** Nope. I mean I think obviously I’d heard of it, I’m at the age where it was really popular when I was growing up, but not really no. I read a lot growing up but I read Goosebumps and stuff along those lines and then got into sci-fi and fantasy and stuff when I was in high school.

JS: It’s funny, we never thought we’d do as many books as we have, and the premise was that I knew the books and Tanner didn’t, but that is long gone because a) we’ve read way further than I ever did as a kid and b) Tanner is probably a world class Baby Sitters Club expert at this point.

CE: The dynamic sort of still works in a way just because Jack, you still seem more invested in the surface text of the books, but Tanner you definitely seem more theory driven.

JS: Yeah, well yeah, that’s cause he has an attention span problem!

TG: I find the hidden meaning of the text.

CE: Do you ever think about the people who listen to the show but have never read the books, and if they one day decide “fuck it I’m going to read these books” and they find a lot of stuff you guys talk about more or less missing from the text? Well not missing, it’s all there, but it’s….subtle.

TG: I think if you listen to the show and then go back and read the books, there’s no way you won’t pick some of it out.

JS: You’ll see it! It’s all there. It’s if you’ve ever read Ulysses, they have all these huge guides to Ulysses…

TG: Oh yeah, I’ve read all those too.

JS: **laughing** No you haven’t. But they’re (the guides) often like 3 or 4 times the size of the original text and you can read them with that and it will help bring out the references that you might otherwise not get, or you could just read it by yourself. So, I think the podcast is like a compendium in that way.

CE: Have you guys had any direct contact with Ann?

JS: Tanner and I saw Ann once, I think we mentioned it on an episode. We were in the building of our office and I was waiting for Tanner to go to lunch and I was standing in the lobby and fucking Ann walked in and my heart was beating so fast and Tanner got out of the elevator and I had these wide eyes and he was just like “What? What? What?” And then he saw her and we both just stood there. It’s like the only two people in the world for who that would be a crazy celebrity encounter and we were too scared to say anything and we just walked out. I think she knows we exist, people come up to her.

CE: People go up to her and tell her about the podcast?

JS: Yeah, I think she knows us as ‘those two guys that drink’ haha.

JS: Haha yeah that is the podcast now.

TG: But she is notoriously reportedly, very shy and introverted so we’ve never pushed it very hard. Honestly, I don’t know what we would do if we ever had her on the show, we would just be way too nervous and tripping over ourselves.

CE: The end of the core BSC series is coming up super-fast and you’ve both said you want to continue doing something, but haven’t decided just what yet, what ideas are out there?

TG: I think what we’re gonna do, but haven’t actually decided yet, is give in to Baby Nations incessant demands and re-read and do all the super specials.

TG: But we’ve got a plan and that’s like a hold-over period essentially and in that time, I think we’re going to put a few pilot episodes up for whatever projects could come next, whether it’s Sweet Valley High or something a little broader, we’ll figure it out.

Listen to The Baby Sitters Club Club on iTunes or the podcatcher of your choice.