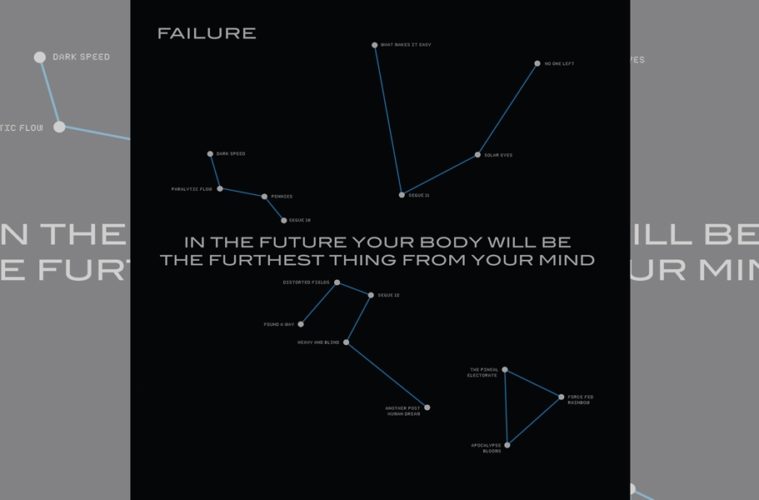 Failure: In the Future Your Body will be the Furthest Thing From Your Mind Review

Borne from a somewhat-interesting approach, In the Future Your Body Will be the Furthest Thing From Your Mind is the new Failure album. Recorded in four parts, the album also saw release in four parts.

The title is an interesting one. It could suggest either thought processes or a connective separation. Many of the tracks suggest the latter rather than the former, but there still is room to think about it.

In the Future… progresses in an interesting way in that it kind of becomes spacier the further on it goes. However, it still remains firmly grounded on earth. It is less of a rock album and a bit more heady than what Failure usually do. It’s significantly calmer when it really needs to be, but there are moments when Failure do rock out.

This achieved by reducing guitar prominence. The instrument is still there but it doesn’t dominate everything. This does lead to a more minimal sound on a few tracks, as well as a more cinematic feel. As such, all the instrumentation gets to speak a bit more. Generally there’s also a bit more space and atmosphere on the album.

Furthermore, there are a number of more angular and abstract sections for a few of the songs that slot in pretty well with Failure’s approach to the music. The songs are less direct, but not to the point where they don’t fade off into the background.

In the Future… also feels much like a progression on from The Heart is a Monster. There is a direct connection sound-wise, but Failure are experimenting and pushing outward here. Essentially the band sounds comfortable with what they’re doing, but they also don’t sound like they’re resting on their laurels.

Unlike The Heart is a Monster, the segues take up much less of the album’s tracks. They segment the album a bit better and fit well into In the Future…’s flow. They’re also more ambient this time around and as such do well to bridge the various segments of the album.

Failure recorded and released four EPs that, when played together form the album. It can be bought as either cumulative parts or the whole album. Or, at least it could for a while. Failure have now removed the options to buy the EPs in pairings and only the whole album is available for purchase. There was no real incentive to buy the EPs over the album. The cost for the first three EPs and the album was the same ($12.00 US). Furthermore, with the album you get the entirety of the experience so it makes sense to remove the EPs from purchase. However, this raises the question of why they were an option for more than a month after the release of the album as a whole.

Another issue is that instead of varying the tracklist to provide a different way of viewing things, the songs here are presented as they were released. The whole thing does kind of work better as a whole, but if you went the EP route, then nothing’s stopping you from queuing them . There’s nothing new. There was no incentive to get the EPs over the album and vice versa. Realistically, rearranging the tracks to a different order wouldn’t have done much to create incentive, but it would have made for a potentially interesting contrast and experience.

Due to not varying the tracklist, In the Future… kind of begins twice.
“Dark Speed” is a good opener as it does well to let you know to not expect more of the same.
However, due to the tracklist not being altered for the full album, there’s now enough of an argument to say that the album could easily have begun at “Segue 10”, or one of the tracks from the second quarter.
At times it breaks the experience as the album feels like it gets moving, then starts again.

Furthermore, In the Future… suffers from one of the problems as the last album: There are too many tracks. There isn’t any filler and the songs are all, at the very least consistently well-made. At the same time there needed to be trimming. The album gets a bit too long by the end and drags despite the quality of the songs.

For some people In the Future… will be fine at its length, but I cannot justifiably say that it’s length is fine. Yes, pretty much all the songs are good but it still feels bloated. There’s no reason as to why some of the songs could have been dropped. There’s also no reason as to why this could have potentially been two albums. A slight delay to work on some additional songs outside of the EPs, then working out what works well together and splitting this into two albums would have been massively beneficial. Instead at times the album feels like a lengthy slog.

Whilst this no longer matters, perhaps leaving some of the songs exclusive to the EPs or LP would have also helped and created incentive to get one, the other or both.

Ultimately this doesn’t say too much about the album. However, it’s important to discuss the way In the Future… came to be and how the process impacts the album. Failure make great music and their stated intentions for this album’s form of creation and release are admirable. However, the approach and result feels like a bit of a missed opportunity.

That all said, In the Future… still is a decent album. It’s clear the tracks have seen a lot of attention and effort. Failure have played more with space this time around and as such the more minute details and textures of the songs really come through. It’s more Failure and it sounds genuine. The band could have knocked out an album that was “in character”. Instead they pushed outward more and produced a work that, whilst flawed in places, is a satisfying experience.

Failure’s In the Future Your Body Will be the Furthest Thing From Your Mind is available here.