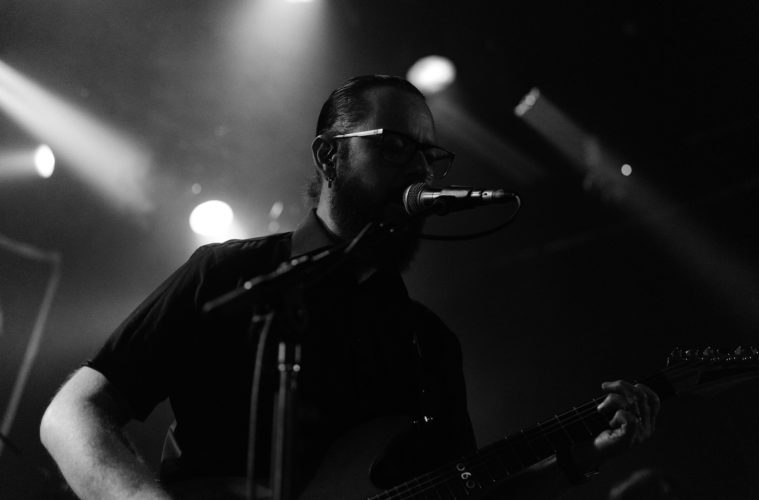 Magical, transcendent and malevolent are the words that come to mind when thinking of the powerhouse black metal band Emperor. Having created some of the most decadent and monstrous albums of all time, there is no denying this band’s impact. The Norwegians long-awaited (and I mean fucking long) tour had finally (and for the first time) touched down. Longtime fans and newcomers were salivating knowing full well that Ihsahn and co. were about to play their anthemic and triumphant 1997 album Anthems to the Welkin at Dusk in its entirety.

The crowd didn’t have time to become restless as only support Ruins came on stage to knock out a tight-as-all-fuck set of blackened grimness. The problem is it seemed as though singer Alex partook in too many devil juices before the show. Fortunately this didn’t affect his vocal range and he delivered an incredibly vitriolic, albeit distracting performance. He did however take aim at the Ruins’ stage side drops and managed to fall into one of them, completely collapsing it before getting into the first song.

All that aside, Ruins are a fantastic band who play incredibly tight and atmospheric, yet brutal black metal. Think Satyricon crossed with Immortal. The night was a perfect example of abilities as a unit as they deliverered blast after blast of icy, grim black metal. Fresh off their recent stint with Download Festival, Ruins seemingly are amping up their live activity. Hopefully this means they have a new record on the way.

Sporting two members of Tasmanian tech death titans Psycroptic, Ruins has the chops and the know-how to become a huge band within the bm scene. They were a perfect opening band for this show as they showcased the best parts of the genre Emperor helped perfect in the early 90’s.

However, we were all there for one reason: to bear witness to the grandiose soundscape of Emperor. It has been 28 years since the summation of members Sammoth and Ihsahn to create the entity known as Emperor. Since then they have toured the world, broken up more times than you can count and released some absolute, stone cold classics, including the monumental peak of bm performance Anthems to the Welkin at Dusk.

Originally released on Candlelight Records, Anthems is a monumental achievement for the band and black metal alike. Over 8 songs and 42+ minutes, the album pushed bm to new heights and became a resounding success for Emperor.

So, can they pull the songs/album off live? Well, to be honest I wouldn’t know. The instrumental intro came on and I blacked out for an hour. My only memories are windmilling, headbanging and screaming.

I joke of course.

The wait was definitely worth it. Sammoth, Ihsahn and Trym were joined by keyboardist Jørgen Munkeby and bass player Secthdamon. Collectively they replicated the album perfectly, and by perfectly I don’t mean it sounded pitch-perfect to Anthems; I mean it sounded like the 2019 lineup of Emperor absolutely decimating any doubts of their ability to play Anthems.

It seems that at the moment there are many nostalgic tours happening globally. This one feelt different. It felt as though it was meant to be less nostalgia and more of a celebration. There was an incredible connection between the band and the crowd and Ihsahn barely had to say anything. However, when he spoke his inflection was one of an individual who was in awe of his fans. Early on he jokingly said “Finally, we are here”.

As Emperor played through Anthems I couldn’t help but notice the smiles on the bands’ and punters’ faces alike. The vibe and energy of the room was not that of a bm show; It was more like a community of like-minded fans coming together to honour the past of a luscious and influential album. There is so much to take in at an Emperor show; the blood curdling scream of Ihsahn, the brutal-but-never over-the-top blasts from Trym, and the solemn silhouette of Sammoth as they hammered through tracks like “Enscorcelled by Khaos” and the epic, symphonic “The Loss and Curse of Reverence”.

Although their Anthems set ended with an exultant “With Strength I Burn” and uplifting instrumental “The Wanderer”, Emperor weren’t done. After their triumphant rendition of Anthems the band continued and played  4 absolutely essential Emperor tracks: “Curse You All Men!” (IX Equilibrium), “The Majesty of the Nightsky” (In the Nightside Eclipse), “I Am the Black Wizards” (In the Nightside Eclipse / Emperor) and “Inno a Satana” (In the Nightside Eclipse) much to the absolute delight of myself and everyone else in the crowd. If you’re a fan of bm, extreme music or transcendental art, then do yourself a solid and go see Emperor wherever, however you can.