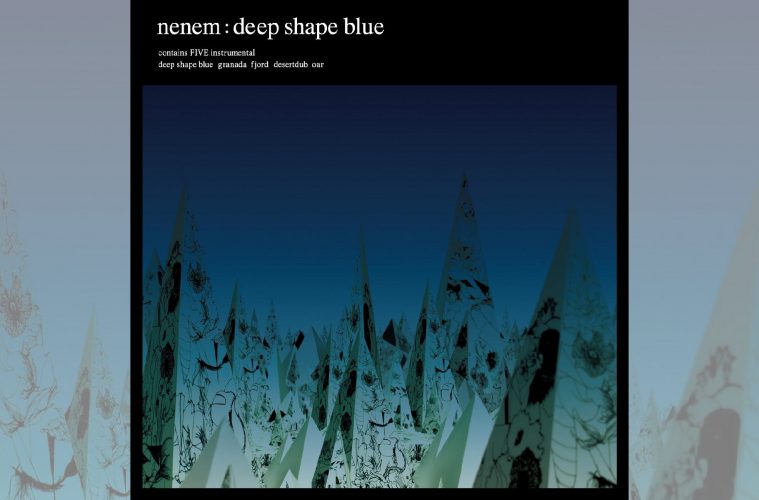 The first nenem song I heard was “Oar”.

It was on Sunday whilst I was going through a playlist of math rock someone had put together. I’d been skimming through a few for a couple of days just to see if anything caught my fancy; Perhaps a poor way of doing some things, but valid nonetheless.

Anyway, I heard “Oar” and found it quite effective. It’s a jazzy song that has this sort of relaxed flow whilst also containing a good deal of energy. You can dance easily enough to it; you can also let it move you with its sense of emotional sway. It’s a song that shows a group confident in a gradual build and flow as well as playing with ideas of progression. The pauses are all in the right moment, as is the angular wah bass section. It’s a song from a group that keep looking forward whilst knowing when to come in and fall back; a group playing as a unit. But perhaps I’m getting a little ahead of myself.

What I’ve seen suggests that there’s little out there about nenem. Their website no longer exists, though it appears it may as well have shut down well before it actually did. It also appears that their last gig was in 2015. There seems to be no recording of said gig, but there is one of a gig from the same year.

From what I’ve read, they were a group of respected musicians. The members (and some bands / artists they work[ed] with) were:

The group referred to themselves as a rock movie band which makes sense as their music is quite cinematic in places. It also speaks volumes about the importance of the visuals aspect of their music.

Outside of Deep Shape Blue and Cool Dawn Place (an album they released in 2008) the group released two demos and appeared on a compilation (one of the tracks found on the aforementioned album). However, Cool Dawn Place is the only other release of theirs that remains available.

Deep Shape Blue is a mini album, which feels like a different way of saying EP. Of course the definitions of album, mini album and EP seem loosely and sometimes arbitrarily defined by track amount and sometimes runtime, considering that, for example, Jesu’s Heart Ache is an EP and Kind Crimson’s Discipline is an album.

What constitutes an album, mini album and EP probably speaks more about the intent of the artist (or record label) and how they want to present their work more than anything else, but I digress.

Deep Shape Blue came out on the fourteenth of January 2009; nenem played the launch show nine days later. Cool Dawn Place was a more energetic release with some chilled, relaxed moments; Deep Shape Blue seemed to have taken the chilled side of nenem’s music, as well as the jazzier elements and pushed them forward.

There’s a fair bit of focus throughout Deep Shape Blue; it’s a release with a sense of coolness and smoothness, but nenem don’t rely on that. Instead they make use of a great deal of interplay, with rhythm as the dominant driving force. There’s also a sense of the relaxed and energetic running throughout, neither at odds with each other. On each track nenem really lean into what they’re doing whilst holding back from going full bore; There’s enough sound for each track, but nothing feels sparse.

“Granada” reinforces that cool without leaning heavily on it; it’s just a byproduct. Keys and guitar move around each other whilst bass plays thick and percussion rides the snare. At times the song feels a little funky; at others more jazzy, but it keeps itself the right amount of upbeat throughout. However, it gets a bit more dancy in places and alters the melody enough to keep progression going whilst retaining familiarity to the opening sounds. At the end nenem refuse to go into a full-on climax; They instead ride a metaphorical wave and really get their groove on whilst some kind of folding noise absorbs them. After this occurrence a gentle and delicate reflection of what came before plays the song’s end.

“Fjord” starts things a little more gentle, with echoing keys shimmering out and off into somewhere. Then moving bass comes in and takes away any suggestion that this is going to be a peaceful song, though of course it isn’t violent either. Once the percussion and guitar come in a steady rhythm flows forward. At points nenem shifts and the keys tighten up, dancing on the rhythm for a bit before the song sort of cycles back. “Fjord” doesn’t really look for many diversions; it prefers to flow linearly through a tight performance.

“Desertdub” kind of sticks out a bit, considering the three prior-mentioned tracks seemingly come from the same kind of world. The various genre influences come together neatly whereas here nenem play a fairly straightforward dub / reggae track. It’s slow, relaxed and very precise if that makes sense. Even when it “picks up” in the “chorus” sections it remains very relaxed. The song has this openness to it, and guest Tabu Zombie’s almost lonesome, smooth trumpet further builds a setting through providing narration. It’s an easy piece to listen to and makes more sense upon repeat listens of the whole mini album.

Well, that covers Deep Shape Blue, but what about the title track? Well, it is as far and away from the other tracks as it is close. “Deep Shape Blue” starts with a quiet loop. Soon keys come on, keeping space and emphasising. Steady bass follows, flowing and driving forward; guitar adds softly moving harmonics. The percussion enters, playing with clear, striking hi-hat / kick / snare interplay.

During the “chorus” sections more texture and tone come to the forefront. Keys slowly descend and the guitar plays with a bit more electricity to provide more definition and breadth.

By the second “verse” the song’s language changes and now strings come in, gliding along with the groove, adding more range and drama. The guitar provides a bit more layering over what it was doing before, though through a different playing method. Slowly and gradually the song seems to unfurl and progress, carrying the sense of landscape, quietness and solitude. The string sounds emphasise without overtaking, functioning more as a punctuation, though all of this is not to last.

“Deep Shape Blue” is a great, calm track that carries mood well. It’s cinematic, pretty and atmospheric, and flows with great ease. This said, at one point it becomes something akin to a disco track in a manner that almost feels off. The bass suddenly plays with wah and the music becomes livelier and far less about mood and atmosphere, but it doesn’t necessarily feel brash or aggressive. It still remains pretty; Maybe nenem felt a need to expand upon the track that added contrast. The section is an interesting inclusion and makes more sense upon repeat listens; It’s also relatively brief and disappears in time for the song to return to its opening notes before fading out.

If there is one specific thing that weighs down Deep Shape Blue, it’s that the mix / master is quite loud. To be fair, this is a bass-heavy release; it was probably going to sound loud in places regardless of the end result. That said, these songs need more space than what was provided. Still, their quality comes through, and so it should as this mini album came from a group that knew how to get the most out of their performance.

At no point does nenem go for an easy payoff which ends up paying off. They know where and how holding back works best and they sound like they function in unison. Their ability helps the songs flow rhythmically and melodically, and they keep things nicely balanced. The songs are tight; no moment goes to waste and no moment falters, helping the whole thing provide a satisfying listening experience.

Anyway, to cap this off, check out the below live performance of “Deep Shape Blue”. And yeah; get Deep Shape Blue if you can; highly worth it.