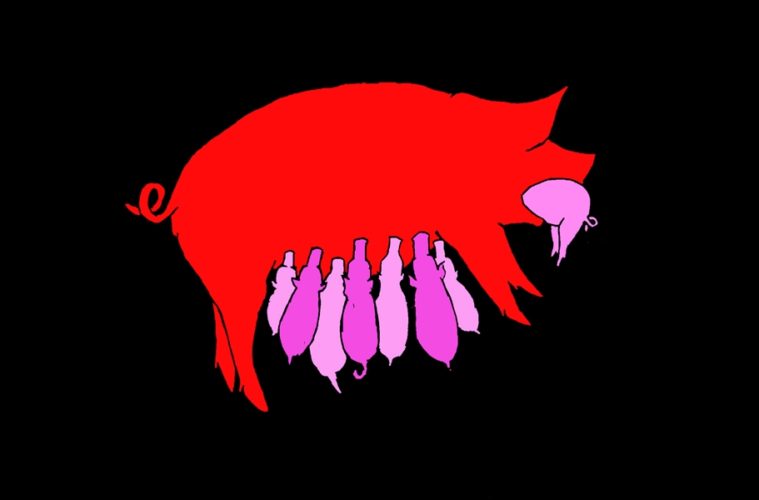 Callback: Godswounds: Death to the Babyboomers

Welcome to “Callback”, previously known as “Flashbacks”, and prior to that, “Flashback Fridays”.

Sean gave me free reign with this (which may have been his resignation to defeat) for Cool Try. I wanted to get this going again for Culture Eater; This time with better wording and far less procrastination.

Well, with that out of the way, here is the first onne once more:

Death to the Babyboomers by GODSWOUNDS.

On the 29th of August 2015 I was in Katoomba with a friend. I was there to help help his mum set up for a garage sale.
It was a day before I went to Melbourne in order to head go to Japan for a few weeks.

Shortly past midday and we were on our way back to Sydney. We were seeing Regurgitator with another friend at Manning Bar that night.

Some band that I had not heard of before was the 2nd support. Initially I did not know what to make of them as I found them to be a bit strange. Just like the rest of the crowd I warmed up to them by the end of their set.

When we headed home I stayed up to find out who the 2nd support was. I bought GODSWOUNDS’ album Death to the Babyboomers as soon as I came across it, then went to sleep.

In Japan Death to the Babyboomers saw a fair bit of play. It worked well as a soundtrack for many places I visited. The album had little issue taking root as its intricacies revealed themselves to me the more I listened.

When I came back to Australia I found that the album had grown so much on me. It has remained one that I keep coming back to on a regular basis.

Death to the Babyboomers opens with the bouncy synth line of “Hachiko Exit” setting the framework for the rest of the song. It progresses and builds as each instrument comes in and slightly alters the song. It’s a nice opener with a good amount of energy and a rather upbeat sound without diving into excess or overwhelming the listener. It’s a strong introduction that gives a bit of an idea of the shape of the album without revealing too much.

Instead of flopping, the album remains strong the whole way through. The songs have a great ebb and flow between each section, as well as between the songs themselves. Some of the songs are more straightforward than others, such as “One by One” and “Pygmalion”, and the more relaxed “Boson Loves Fermion”. Other songs such as “Car Eater” and “Forgiveness is for Cowards” lean a bit more toward the abstract. However, this doesn’t harm Death to the Babyboomers. Instead the songs retain consistency due to working with the experimental, fun and direct framework of the album.

There’s a strong theatrical feel in the way the songs progress and how each instrument and vocal builds on up over each other. This is best exemplified in “Dirty Habits”, a song that has gradually builds up through each section toward a fairly tense middle section then pulls back and goes back to being something (comparatively) more subdued and lighter. It then rises again, yet cuts off before a loud climax and naturally flows into a subdued, lighter section once more. Rather than following linearly, the vocals build on and layer over each other, becoming as expansive as the melody due to the guitar, synth, bass and percussion doing the same. “Dirty Habits” makes for something quite large, but it never oversteps its boundaries. It knows when to release and pull back in and never sounds as though anything is in excess.

Whilst recorded piecemeal, Death to the Babyboomers sounds like a lively group performance. The percussion holds down the beat well whilst pushing outward; the bass follows suit whilst guiding the melody and the guitar alternates through a few different techniques and styles without being showy. Additionally, the trumpet seems to glide along whilst alternating between emphasizing various melodic lines and the vocals whilst occasionally adding its own melodies. Death to the Babyboomers is a fair bit more precise than many live recordings. At the same time it does sound as though everyone is playing off of each other as a unit whilst bringing a bit of themselves to the table instead of each member vying for centre stage.

However, it is worth mentioning the chiptune elements and how they work.
Like everything else they play a prominent role in the shape of the songs. At times they sound like they see use more for enunciation instead of something more at the forefront. They always see good use and really help shape the character of the songs. However, they’re not in everything. The chiptune elements see use only when they will work. Furthermore, other synth sounds balance them out use-wise and prevent them from wearing out their welcome.

Delivered with much aplomb, the vocals are as theatrical and dynamic as the instrumentation. Most of the singing is clean and there are a lot of vocal harmonies and interplay used throughout. On occasion there’s something resembling black metal shrieking used to great effect. The vocals usually sound fairly serious, but they occasionally adopt a sense of playfulness. Notably, on “The Ballad of John Connor” they strike a balance and sound as silly as they are serious. Regardless of how serious they are at any moment, the vocals always fit well.

Furthermore, the vocals from guests Carla Kihlstedt (“Dirty Habits”) and Eugene S. Robinson (“Car Eater”) are as strong a performance as anything else on the album. Being good choices for their appearances, their vocals sound like they’re a whole part of the songs rather than just vocals from a guest.

Death to the Babyboomers manages to get away with having two closers.
The first, “Monster Island” seems to be inspired in part by reggae. It starts off fairly low-key and gradually becomes more grand and in some parts ornate whilst wrapping up the whole album quite nicely. Essentially “Monster Island” feels as massive as its title would suggest.

“Trails!” follows. It’s a rather bouncy track that has a few soft, yet uptempo moments interspersed with loud guitar-driven sections and ends in something analogous to a noise meltdown. After “Monster Island” it works well due to how much smaller it feels whilst also remaining large in scope.

In 2017 GODSWOUNDS announced that Death to the Babyboomers was getting a vinyl release. I was quite excited due to it being a while since the last GODSWOUNDS-related news. For me it was confirmation that the band still existed.

I recently gave the vinyl version of Death to the Babyboomers a few spins and was glad that it holds up well to the original version. The vocals seem to be a little lower in the mix and some of the more subtle sounds have been brought forward.

“The Ballad of John Connor” now comes after “Pygmalion”, whilst “Boson Loves Fermion” and “Trails!”are removed. The result is that the vinyl’s second half has a bit of a different feel when compared to the original album. It becomes a bit more direct and has a little less of a break, but there is a synergy between “Stationary Fiend” and “Pygmalion” that wasn’t there before which works really well, and the album still has a strong conclusion.

It’s hard to say if either version of Death to the Babyboomers is superior. Having two songs missing is a shame, but the vinyl brings attention to some of the other sounds that weren’t as obvious on the original release. It also sounds as clean and dynamic, and in some places more so than the original. They compliment each other well, but you don’t need both for a complete experience.

There’s a fair bit going on with Death to the Babyboomers despite how simple it sounds. The songs have a lot of personality to them and whilst they may have initiated from one person, it’s clear that there was a room for each member of GODSWOUNDS to bring in their personality and style. Instead of becoming a mess, the album sounds like the sum of its parts. It’s really lively despite its piecemeal recording, and it doesn’t sound like anyone is giving less than 100%. Furthermore, it sounds experimental whilst sounding natural.

However, Death to the Babyboomers really does well is something that a lot of artists seem to be unable to pull off: it sounds fun without compromising on quality or sounding trite. Some of the songs are more serious than others, but overall the record is consistently upbeat without sounding cheesy or throwaway.

With that being said, whilst Death to the Babyboomers is a strong album and one that has remained in my regular rotation, it leaves me thinking that GODSWOUNDS can do much better. The album is strong, but, along with the E.P. (小吃) that came before it, it feels more as a base to build from despite how complete it sounds.

GODSWOUNDS are a band that I was glad to see perform live. It has allowed me to say that Death to the Babyboomers is an album that I’m glad I’ve heard. It’s worth experiencing and letting it carry you on its journey. If you go for the digital / C.D. version or the vinyl version, or both, you’re in for a treat.

Death to the Babyboomers can be found here.