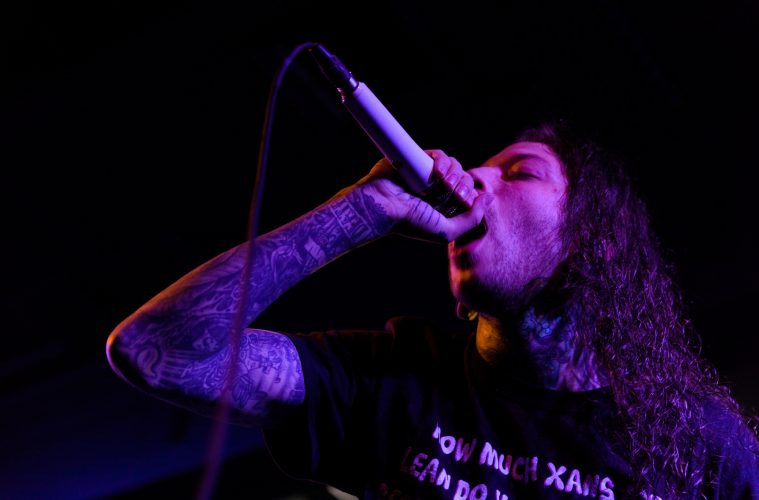 I remember the first time I ever heard Born of Osiris. The year was 2007. I was at a drinking session and having a music battle with an iPod classic, an aux cord and Oli from Point Below Zero. As Oli pressed play and the double kick triplet blasted through the speakers I definitely wasn’t prepared for what came next. Even as I’ve moved away from metalcore, the phrase “Fucking bow down!” and the tech shredding that follows remains firmly imprinted in my mind.

It’s safe to say that as I walked into Crowbar, I was pretty keen for some hard-hitting metalcore nostalgia… and I was not disappointed.

Beer in hand, I watched as Sydney locals Above, Below opened up the stage. A solid opener, they pumped a blend of punk and metalcore, showcasing influences from the bills’ other bands. Having heard a bit of buzz about this band but no music, I was intrigued to watch what was coming. They played well, and vocalist Jacob Wilkes possessed quite a unique performance style, intensively contorting in and out to the beat of the guitar chugs like a metalcore Peter Garret. The band seems quite young, but they held their own on the stage with a certain conviction. Seems the buzz and momentum surrounding these guys is definitely well-founded.

I have to say I was pretty keen to see the boys from Diamond Construct as I’ve been spinning their new record on the regular. It’s intensely heavy and follows a trend in Australian heavy music at the moment of sonically keeping your mind teetering on the edge of disassembly, which I’m all about. However, live they didn’t quite capture that  essence. A little bit messy and a fairly average mix meant the punch and intensity of their music doesn’t shine through, which was a little disappointing. That’s not to say that the lads from Taree weren’t giving it their all on the emotional Richter scale; it just wasn’t quite hitting the mark.

Now, on to the main event: Deathcore is often bandied around as a dirty word and an insult in heavy music circles, but Chelsea Grin wear the badge with pride, and for good reason. They know what they do and they do it fucking well! They don’t move much, but they command the stage with confidence and own it by playing tighter than an emo kids’ jeans. Drummer Pablo Viveros manned the helm, shredding the drums and providing some heavy low vocals whilst the others followed suit. It led to a performance almost indistinguishable from the record.

New vocalist Tom Barber slots easily into the band and gives both their image and energy a more positive revamp. Not to mention he can actually perform live.

Opening with “Dead Rose”, the set drew heavily from their latest record and first output with Barber, Eternal Nightmare. Perhaps the lack of older tracks was to make Barber feel more comfortable. Whatever the reasoning, it was a good decision as Barber pulled out all the stops, including one of the most epic pig squeals I’ve ever heard on the album’s titular track.

Rounding out the night, Born of Osiris pumped up the energy with their brand of metaphysical, progressive metalcore. Lead vocalist Ronnie Canizaro and keyboardist Joe Buras got the crowd moving by bouncing around the stage from the outset.

Opening with The Simulation‘s “The Accursed”, their set was much more balanced than Chelsea Grin’s. The audience got their sweeping fix with “Analogs In A Cell”, their djent with “Divergency”, and about as close as you get to a singalong with these guys on “Under The Gun”. And of course I got my nostalgia fix with “Bow Down”. The whole band was on point. They kept it epic and energised right until the end where they closed with the orchestral “Machine”, and Canizaro belting “WHAT DO YOU SEE?” at the crowd.

I don’t think anyone’s jumping to give either Chelsea Grin or Born of Osiris an award for creativity or musical evolution. They’ve found their groove and continue to sit comfortably in it, with their sound for the most part unchanged in over a decade. These two bands run under the adage of “If it ain’t broke don’t fix it”, and judging from the pit it’s still what the people want. In any case, I left sufficiently satisfied with the amount of sub-drop breakdowns, blegh and pinch harmonics. All in all, for a Monday it was a pretty headbangin’ way to start the week.