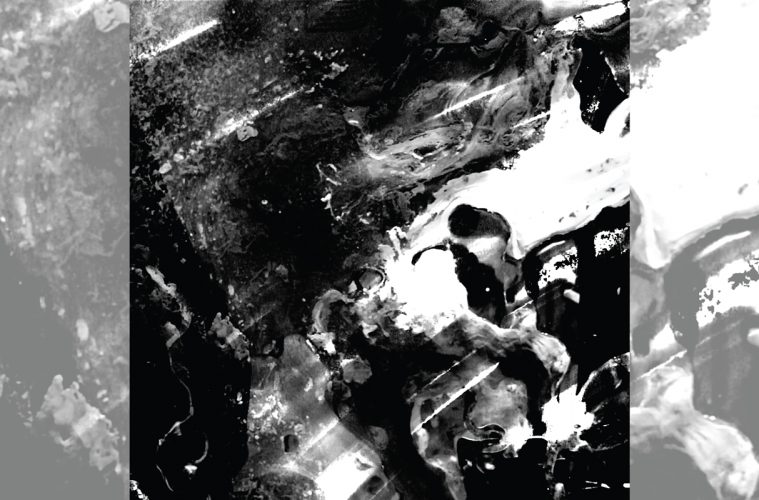 I was walking up to Campsie to take some photos so I decided that it would be a good time to listen to Begotten. I was going to be reviewing it after all, so why not get a start whilst walking?

So I listened to it as I walked. I appreciated its elongated ambience and how well it blended with an area appearing worn down as seen during the sunset. It was feeling rather natural. When the loudness and screaming first came in it was… well, it was kind of terrifying. Then it quickly lost its impact and dragged.

Begotten starts atmospherically. As different sounds move in and out, it becomes wide, expansive and dry. Sometimes bleak, and sometimes morose. Guitar guides a little as percussion patters in and out. A bit of tension builds as sounds build and grind and stretch that eventually drops away, leaving what sounds like the sound of a train approaching from a distance when the rails it is on are vibrating.

The following track continues with the ambience, though is more on the minimal and melodic side of things. Percussion seems to shimmer in and out, build and release over quick cymbal work. Toward the song’s end a recognisable drum beat kicks in and guitar starts sounding out something kind of mournful over the terse, tense beat.

On the third track Begotten becomes a bit more industrial and bleak in sound. It seems to move toward something more apocalyptic. There’s far less melody kicking this one off. Some clanging early on. Rising sounds. Unnerving, stretching synth strings. Droning, ambient. Suddenly noise froths up quickly, then the first moments recognisable as a “traditional” song kick in. Doomy, apocalyptic, repetitive, grinding guitar and bass throngs on whilst tortured, gritted-sounding screaming goes on somewhere among it all, as though it is suffocating. It’s intense, uncomfortable and harrowing… at least at first.

Whilst that initial hit is really hard and gripping, the screaming loses its touch by dint of allowing itself to go on for too long. As part of a section it’s actually quite interesting both for contrast and how powerful it is, but at the same time, for what is going on with a good chunk of Begotten, it’s incredibly verbose.

From here Bolt Gun reveal their hand a little too much, though there still is standout work, such as “Crawling Like an Insect Under The Shadow of God” which seems to move like waves on a shore until it decides to let the guitar move forward. Once more screaming comes forward, once more sounding tortured, but this time much more primal and afraid. They work a bit better here, but they once again overstay their welcome.

“To Lay Like Worms Amongst the Silence” is sort of a more active form of most of what came before in that, whilst ambient in places, is much more willing to strike out. “Dragged to the Woodpile” is more active still, though perhaps less aggressive and more dramatic and dreadlike. “Congregation” feels like the preamble for the following track, but still holds its own identity. It carries a sense of gathering, though with highly foreboding undertones.

Closer “The Altar of Lies Will not be Destroyed” is Begotten‘s most song-like… song. It has a sort of sludgy, driven-type feel to it and slowly builds into noise. Here the screaming works best as there’s more of an idea of a build up and support behind it. It’s not this suddenly-towering thing that’s dramatically flailing its arms; it’s something rising from the foundation, and holds force and weight within itself.

Instead of going for a massive release, “…Altar of Lies…” lets itself drop out on a distorted scream. From there, spaced percussive sounds follow a droning ambience to its fading end.

Generally Begotten is at its best when it’s quieter; That is when it effectively pulls you under and pulls you in. It allows your mind to cast forward and absorb what you’re hearing. When it switches out to something louder it becomes more intense, but also much more flat. That’s not to say that there isn’t merit in the contrast; the loud stuff makes for an interesting build on the ambience and presents it in a much more upfront, aggressive way. The problem is that when (outside of the closer) Begotten gets loud, it’s almost as though Bolt Gun shed all sense of tact and finesse and go “This is what you are meant to be hearing”. Whilst at first it hits hard, the loudness provides rapidly-diminishing returns and its not long before it becomes tiresome.

I can’t help but think that Begotten‘s (admittedly few) louder moments would work better in a live setting. With presence they’d become an overwhelming, all-encompassing element. On record, not so much. It’s clear that Bolt Gun are doing something worth checking out, but it needs more development and work to really make it click and make the most out of their contrasting sides. Outside of this, Bolt Gun really nail atmosphere and subtlety in a way that few bands dream of. The ambient sections are impressively immersive. They grow and contract smoothly and carry atmosphere with ease.