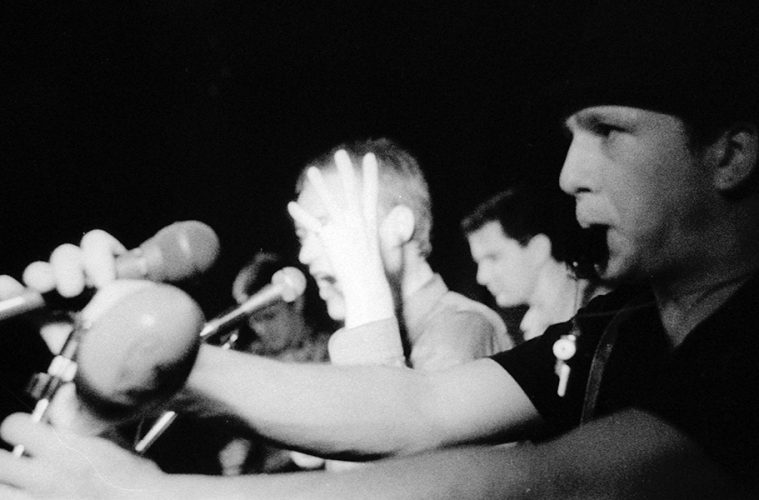 Zoom City Girl: An UpClose Look at the Mods, Punks, and Sharpies of The Early 80s Sydney Music Scene

In 1975, thirteen-year-old  Simone Paterson was in the front row of an ACDC concert when she was baptized into the hard-rock scene in true punk fashion by Angus Young.

Her older sister had brought her to a show at The Ryde Civic Center, a medium-sized arena near where they lived in the Sydney suburbs.  ACDC was booked to play a “dance” that was organized to keep the local youth occupied so they wouldn’t go destroy things, which was a problem during that time.  It was an effort by the community to give the youth in the suburbs some fun and safe entertainment.

“I had an older sister and she didn’t want me to go, but I convinced my mother I should be allowed.  My sister said she would look out for me, but as soon as we got out of the car she was gone. I wore a little pink floral dress and ballet flats and made my way up to the front row, and Angus spat on me,” Paterson told me, now an expat living in the US.  She noted it wasn’t deliberate, and that was just totally in his bad-school-boy character.

“I was totally transformed by that experience. I was way out of my league. I was way too young.   There was a lot of drugs and alcohol and I hid in the girl’s bathroom after that, it was just too much for me.  All these sharpies came in with their shaved heads, telling me how cute I was. They gave me cigarettes, and little sips from their flasks of booze.   It was a shift in my consciousness.”

Paterson had seen the light, and it was that shift in her consciousness that led her to thrive not only as a music-photographer in the late 1970s early 1980s Sydney music scene, but also as digital and media artist over the past 40 years.

This is a brief front-row glimpse into that scene through Paterson’s lens and through her stories of that grimy time that is now regarded as somewhat of a golden-era of Australian music. 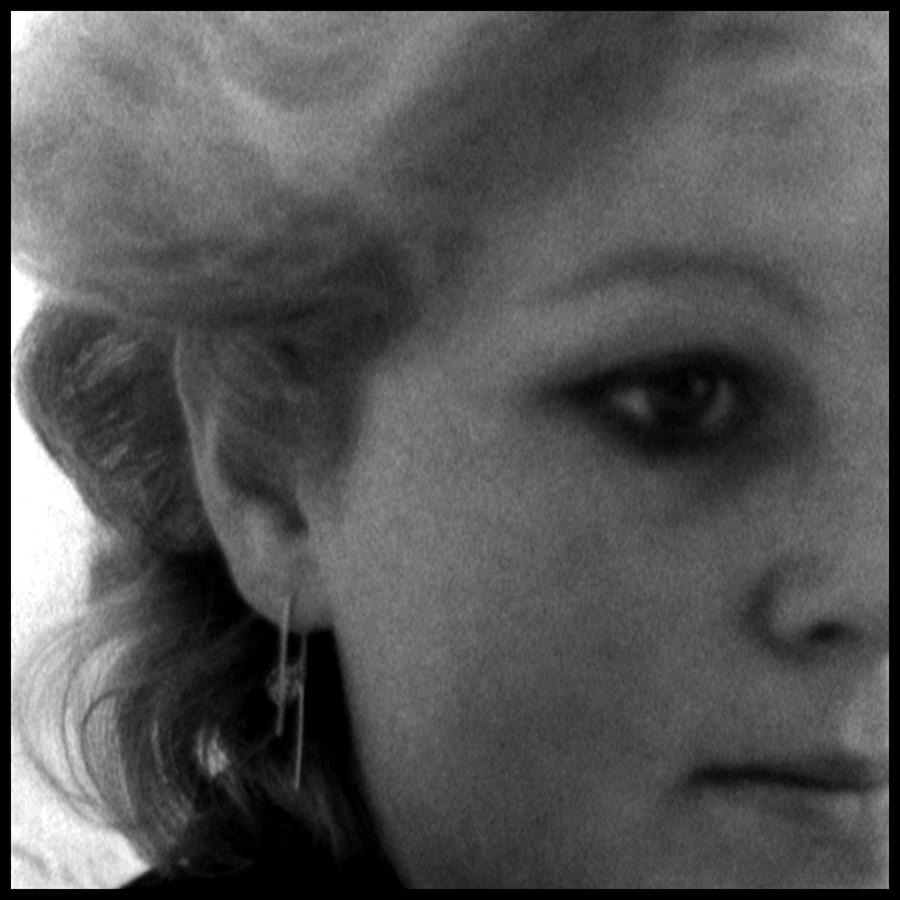 I punched Nick Cave on stage in his arm because I couldn’t reach his face.  He is a huge man. He’s seven foot tall. You know the song Zoo Music Girl, he was playing it when he put his massive hand on top of my head and was pressing down.  I had my trusty Pentax K-1000 and I was swinging it as hard as I could but could only reach his arm.

My Pentax K-1000 was such a good camera because it was heavy, and I would hit people who were getting out of control with it, or if they were getting in my shot.

That was such a badge of honor.  I think that was something he would do regularly is almost break the neck of a Zoo Music Girl.  I photographed him a lot.

I think the reason he did that to me was because I photographed him doing something naughty and also illegal.

At the time he was with The Birthday Party, and I saw him a bunch with The Bad Seeds.

He would sometimes turn up to a pub on Oxford Street and have a beer at the bar.  He stands out like dog’s balls, he’s seven foot tall so you can see him walking down the street from a mile away.

I would usually shoot one roll a night, 36 shots, sometimes two if there were two bands.

I’d be lucky if I got one or two shots from that.

Most of the time I would process the film that night as soon as I got home from the gig.  I had a friend who was a photographer, and also really knowledgeable about music, a bit older and was really into the punk scene.   He was a mentor of mine.

I would take my envelope full of 8 by 10 prints the following night or later that week to where the band was playing, and I’d stand out front with my little orange envelope of photographs.  People would come up to me, ask for a photograph of Laughing Clowns or Secret Secret and I would pull it out and they’d give me 10 bucks and I’d have drinking money for the night. 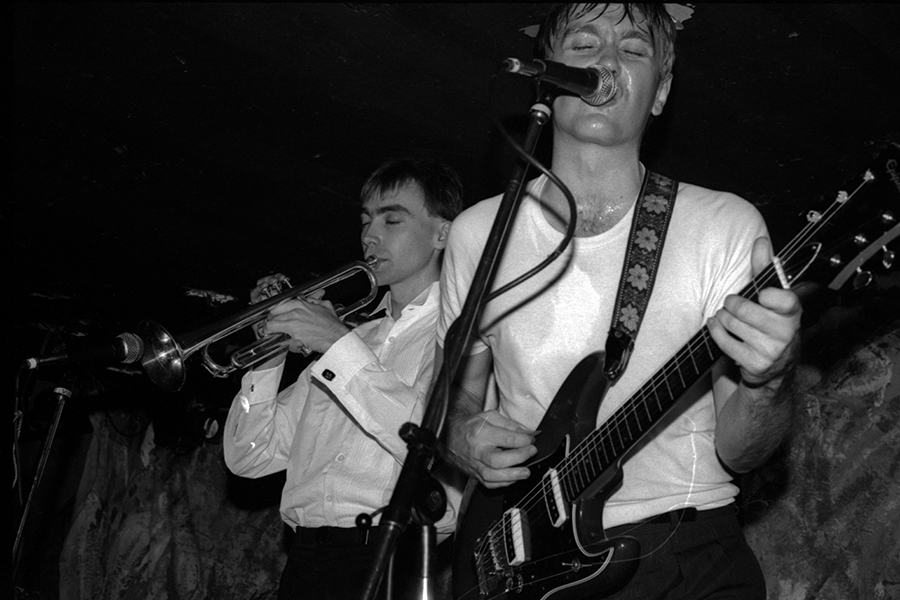 Ed Kuepper co-founded The Saints, and returned to Sydney when he became disenchanted with the direction of the band.  His growing interest in brass-driven free form jazz music led him to form the Laughing Clowns in 1979. He went on to later form The Aints in the early 1990s, and his solo career and other projects have established him as one of Australia’s most prolific and successful recording artists.    Peter Doyle played trumpet in the band from 1981-1983. Laughing Clowns’ legacy is that of international cult status, and bands like The Birthday Party, The Go-Betweens and The Moodists credit the band with influencing their respective careers.

In a moment of historic musical symmetry , it is reported ACDC played their first show ever at Chequer’s in 1973.

The bands at Chequers set up in the basement-club and a lot of the shows were very up close and personal.  I was up on the side of the stage, getting blasted, no earplugs or anything, it kind of affected my hearing.

Everything was loud, your ears would ring for days.

This night, it was really packed.  It was really hot. You can see how they are sweating there.  I could say those gigs were so uncomfortable and so unpleasant, but everybody was in it and having a good time.

It was just an assault on your senses, and I was in the thick of it, and would stay as long as I could stand it.

I saw The Saints play quite a few times but Laughing Clowns were more like organized sound. They were phenomenal musicians, really able to transfix the audience to another space.

My Face is not in Your Locket 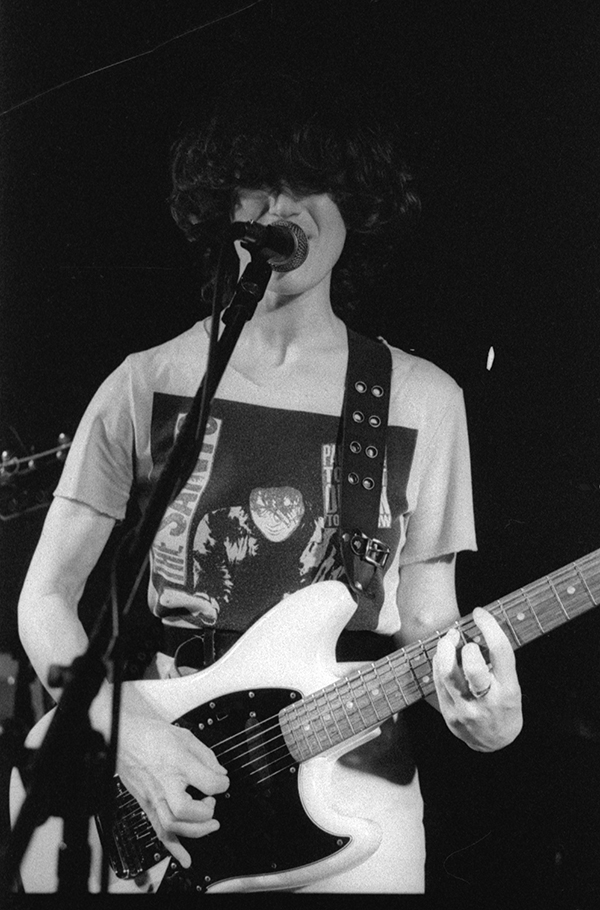 The Fast Cars were darlings of the mod scene.  It was the time of union Jacks, pristine suits and periwinkle shoes, Vespa scooters, and the Sussex Hotel was their unofficial headquarters.

There were some really strong women in different bands, and they were inspiring to me.

There was Chrissy Amphlett from the Divinyls, Linda Nutter from the Dugites, and the sisters Jude and Jane McGee with Pel Mel.

It was really challenging for women.  It was male dominant, it wasn’t acceptable for women to go out for themselves like I did.  A lot of the time I would dress like a boy so I could blend in, and not be too girly-girly because I would get harrassed.

All of these venues were so grungy, you really would worry if you would get crabs when you went to the toilet.  It was really rough.

A lot of drugs and a lot of drinking but Australians are renowned for that.

There were fights, especially between the different factions, the hard core punks hated the mods.

I learned kung-fu to protect myself and it came in handy sometimes.

But the beer was cold, the company was good.  There were assholes everywhere, but that was part of the scene. 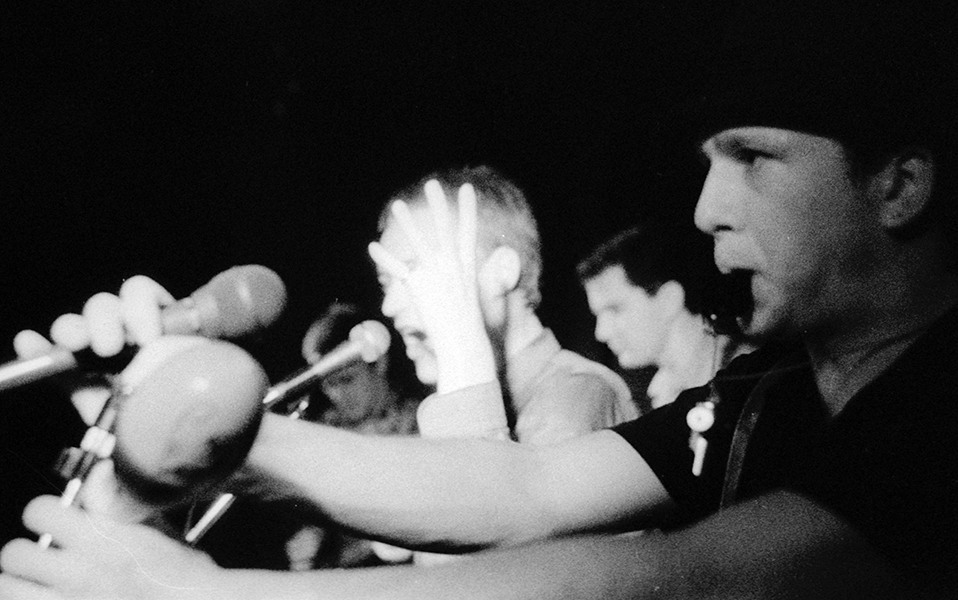 The Allniters —or as Simone refers to them, ‘The Allniters, the Ball-biters– epitomized Australian ska music in the early 1980s.

It was fitting that the music scene in Sydney found an unsafe haven in the location where the convicts first landed on the continent in the neighborhood known as The Rocks.  And before the Governor’s Pleasure became a high-end strip-club, it was a restaurant /pub in a sleezy neighborhood that played host to many a punk, ska and mod shows, and the Allniters were regulars there.

Similar to what was going on in the UK, Ska music brought people together, and was enjoyed by both skin-head punks as well as party people who were just out for a good time.

There was a lot of dancing, as well as what came to be known as mosh pits.  People jumping up and down, pogoing. If I was going to the ska show I had on a pair of purple straight leg pants, and a black jacket.  Boots. They were Doc Martins. I always wanted cherry ones but could never afford it. I still have a pair of snakeskin Doc Martins. They’re pristine and have never been worn.

I had my hair cut really short and a lot of black eyeliner, but I’ve never been much of a makeup girl.

It looked a bit like Clockwork Orange, even when I went to that ACDC show when I was 13, that is how everybody was dressed.  They were known as sharpies. They had a particular dance form, they carried knives, flick knives.  It is interesting how that look carried over.

It was a very informative time of my life, it was ok to be outside of the mainstream, and it was ok to find your creative voice, and even if other people considered that weird or a little bit moribund, or a bit bleak that was totally ok just to be who you are.

Need you (not to strip) Tonight 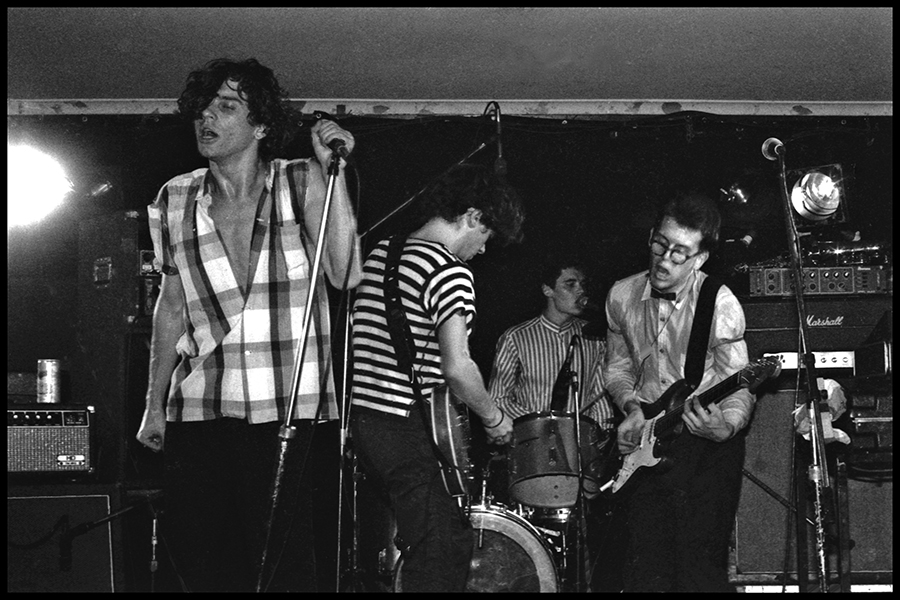 Now the Bayview Hotel, the Bayview Tavern was in the suburb outside of Sydney where Simone grew up and was a regular stop for bands working the small-club circuit at the time.

Before Michel Hutchence’s untimely death and his band INXS achieved pop-icon status, they were a part, unwelcome or not, of the music scene in Sydney during the early 1980s.

This is in their early days and I didn’t really like them.  There were a lot of shirts ripped off. Nick Cave would rip of his shirt but it was different somehow.  This is Michael Hutchence when he still had his acne scars.

My friend was waiting tables at the same restaurant as Michael and asked him what he wanted to do with his life.  Michael told him he was going to be a rock star.

We thought: ‘Oh yeah right, dickhead’. But he was determined.

In fact a good friend nearly punched out Michael Hutchence on that particular night.  A lot of bogans were not particularly friendly to INXS. 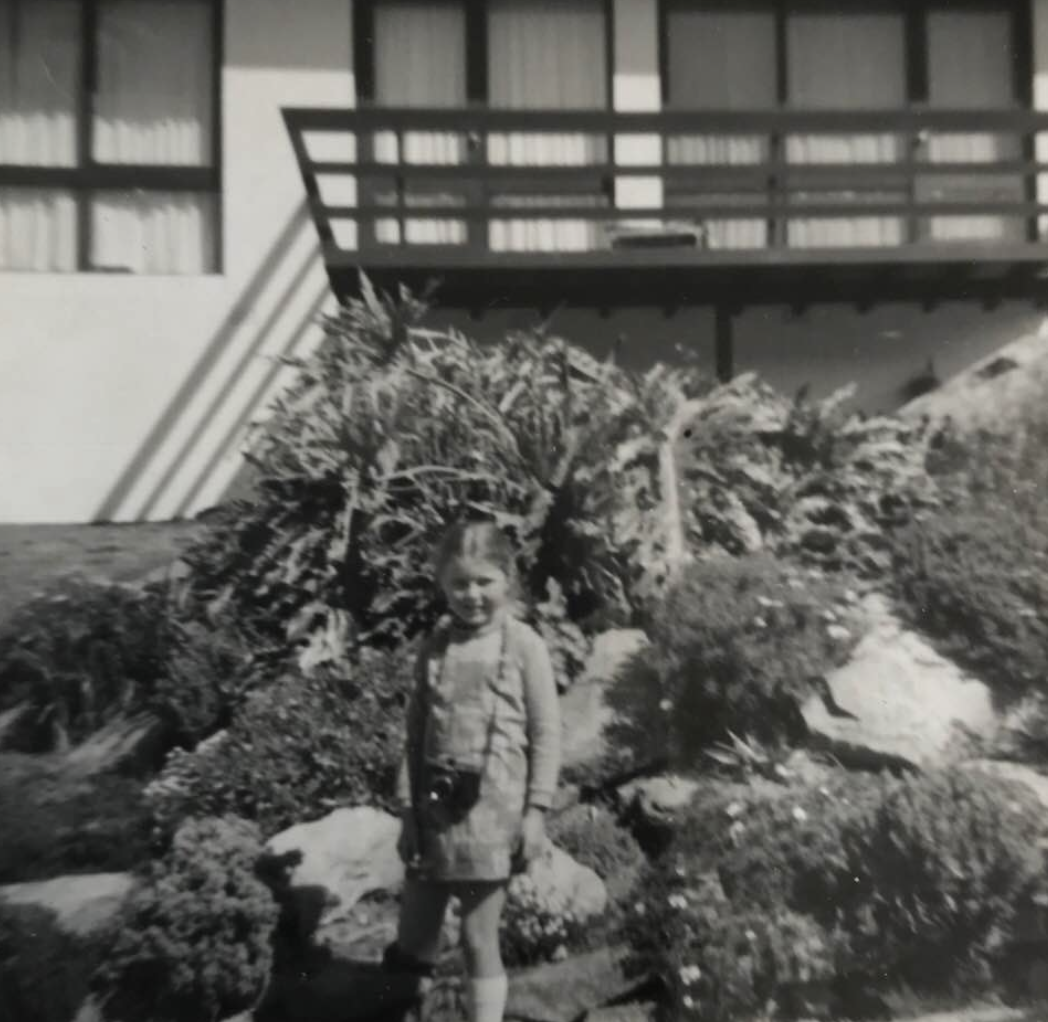 7 year old Simone outside of parents home in Sydney

Paterson left Sydney in the mid-80s and traveled the world, eventually landing in the country side of the United States in the state of Virginia.  She is a successful artist and recently retired art-professor. 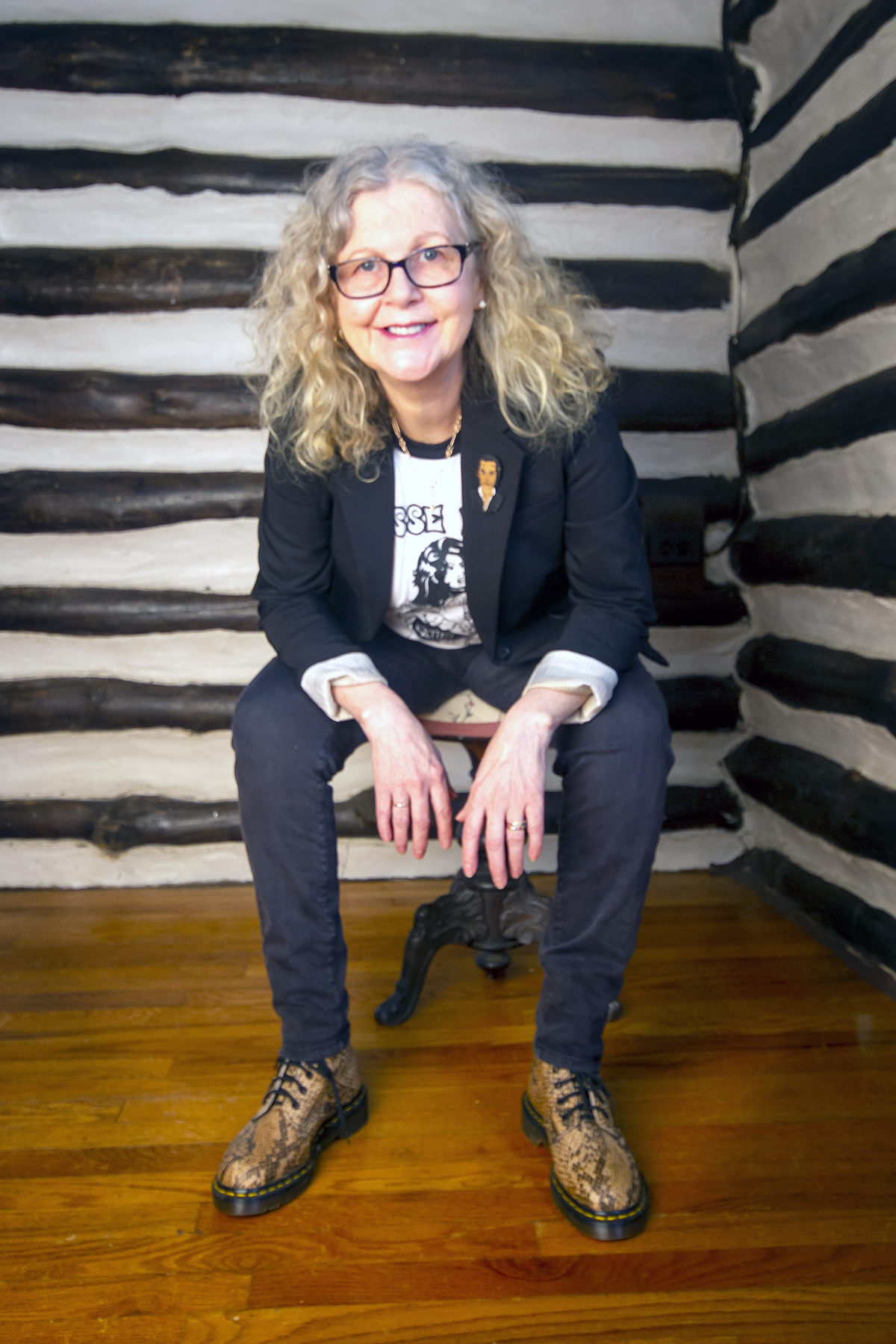 Some of her recent works will be exhibited in the Guns to Roses exhibition at the Maitland Regional Art Gallery from February 29 to August 2. 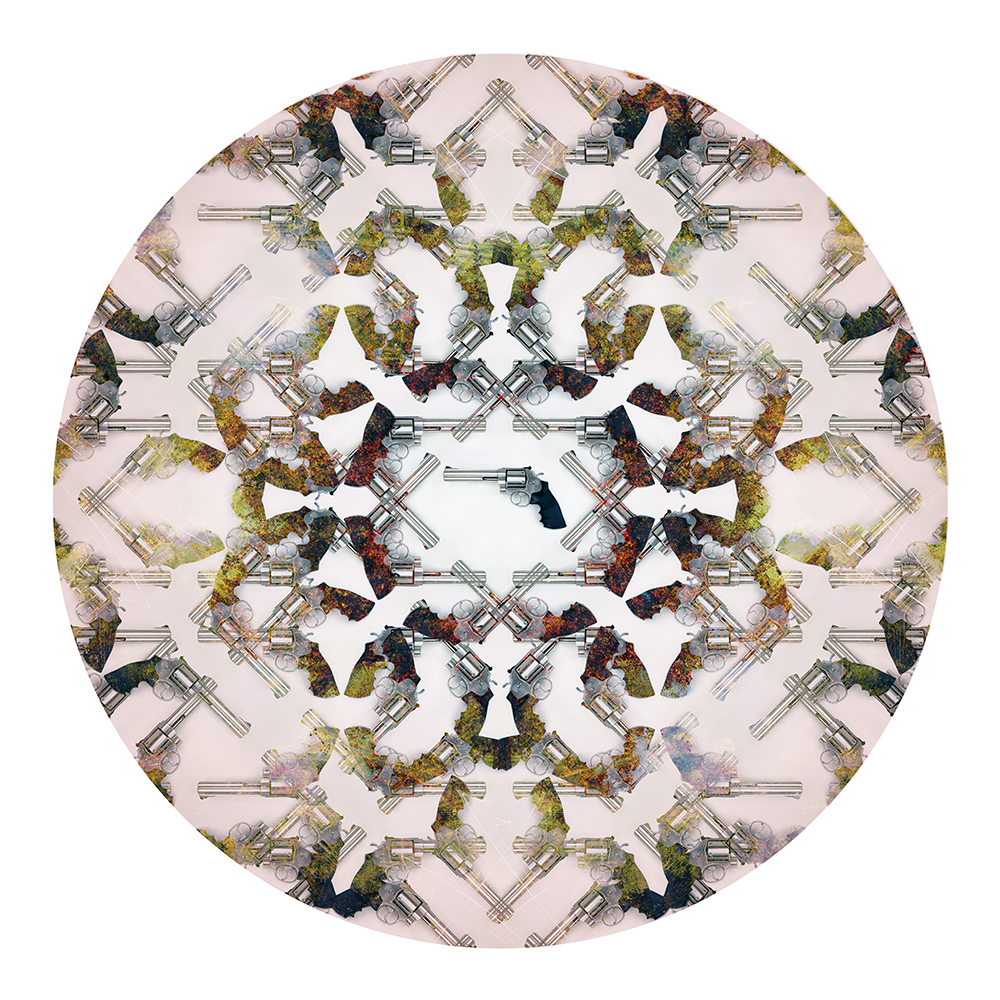