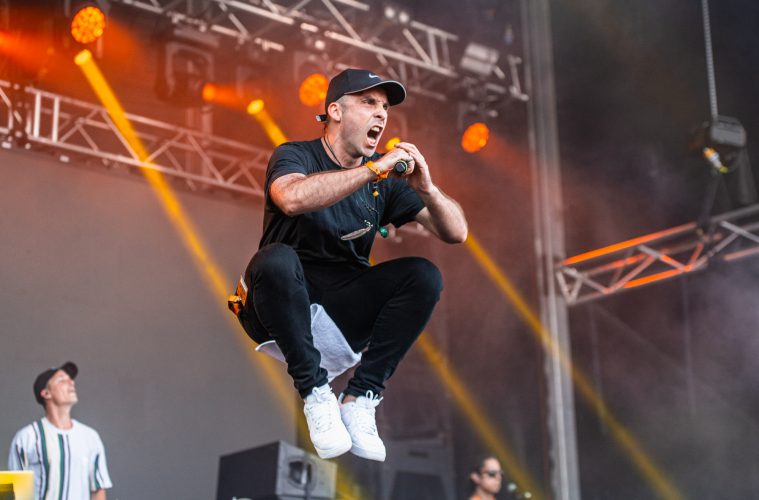 Yours and Owls Festival 2019: Day Two

Given the state and behaviour of the crowd that I witnessed the night before I was very surprised to see a rather large group of people in early watching Pacific Avenue. Maybe these were fresh Sunday only attendees, but either way it was impressive.

It was nice to go to a festival for once without any major preconception of the line-up or who to watch. I just let the beers guide me. But, for that reason I was firmly planted at the ‘Yours’ stage for a while. I managed to get in early but I needed some recuperation.

Up next were Melbourne rock n’ roll stalwarts The Delta Riggs. Usually you can always count on The Riggs to bring the groove with their style of slightly psych-desert rock, but today the band seemed more haggard than the crowd. Churning through their repertoire slowly and somewhat begrudgingly, at one point attempting a track off their new album Modern Pressure in such a hodgepodge they had to start again. “That’s the problem with playing new songs” quipped vocalist Elliott Hammond, “you have to learn them first”. 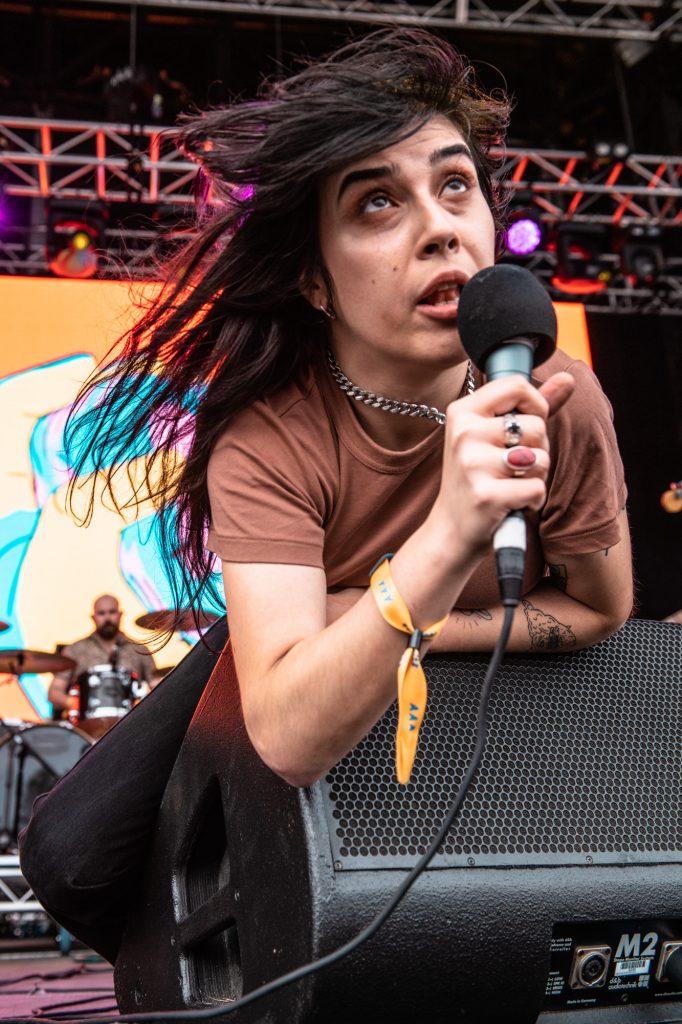 Rock was the theme of the morning ‘Yours’ stage today and Brisbane’s WAAX kept the vibe going. WAAX have seen a meteoric rise in popularity after their EP Wild & Weak and now their album Big Grief. They played great and had great energy but I’m not sure that their punk style translates on to the big festival stage. They’re definitely more suited to smaller more intimate venues. I think the band may have felt this as well; vocalist Marie ‘Maz’ DeVita kept making a few trips down to the barrier and into the crowd. Though it was entertaining to watch struggle to get back on stage whilst the rest of the band just looked on, taunting her about her lack of grace.

Having successfully recuperated by the hair of the dog I was finally ready to trek it over to the ‘Owls’ stage. Odd World residents Ocean Grove were up with their bizarre brand of nu-metal inspired grooves. It’s the first time I’ve seen them since Dale Tanner relinquished his bass duties and became the full time front-man; He’s really settled in to the role. Opening with a brand new track called “Junkies”, the ardour from both the crowd and the band was palpable. The pit filled instantly with everyone moving and circle pits forming, showing how hungry Aussies are for heavy music at festivals. Their industrial rendition of The Presets’ “My People” was a highlight for the day. Hopefully they’ll record it!

With some downtime I decided to check out ‘The Local Stage’, the allocated chill out space for the festival; Full of artistic expression and preachings of sustainability. Craft tables repurposing plastic waste, food stalls explaining how to eat and live sustainably and harmoniously, and a freckled redhead in plaid who was exceptionally good on acoustic guitar, screaming “We’re not a cult!”, which I can’t help but feel is exactly what a cult would say. 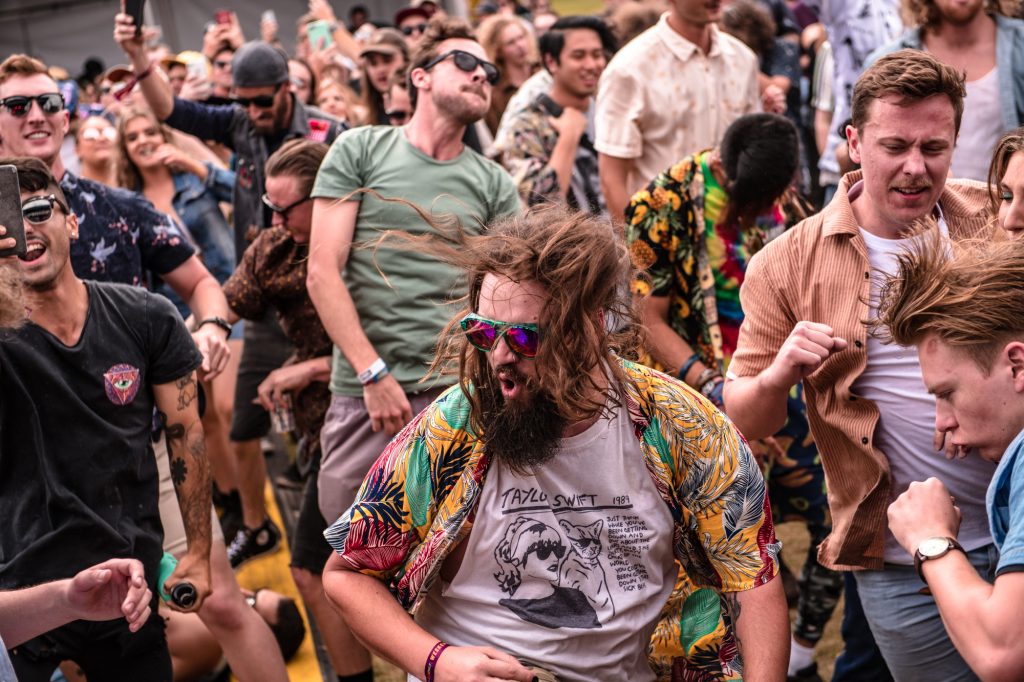 As cultish as that may be, I arrived back at the ‘Owls’ stage to five men dressed in bright red, full body jumpsuits and bullet proof vests; Genesis Owusu’s goon squad. What proceeded was a theatrical induction into the goon squad to the stylings of Gensis Owusu’s amalgam of hip hop, funk and fusion jazz whilst highlighting important rules of respect and exploring the complexities of identity. The second rapper of the festival (after Kwame) to give a speech on respecting and appreciating women made it feel like the rap genre is changing its mantra.

The coveted sunset slot for day two went to Byron Bay surf punks Skegss. Skegss are like Dune Rats’ clean cut cousins. They might not be as chaotic but they are just as catchy and just as Aussie, and everyone was going wild for them. “Spring Has Sprung” and their flagship “L.S.D.” absolutely went off!

Speaking of inherently Aussie, I think it’s probably fair to argue that you’re not truly Australian until you’ve seen Frenzal Rhomb at least once. It was everything you’d expect; Lindsay McDougall dressed like the builder from The Village People, profanity, nudity and facetious praise of Courtney Barnett, with Lindsay McDougall thanking the crowd for not watching. As always, Jay Whalley and his matted locks apathetically manned the helm whilst they charged through classics like “Mr. Charisma” and “When My Baby Smiles At Me I Go To Rehab”. You can really sum it up in 3 words: Punk as Fuck! 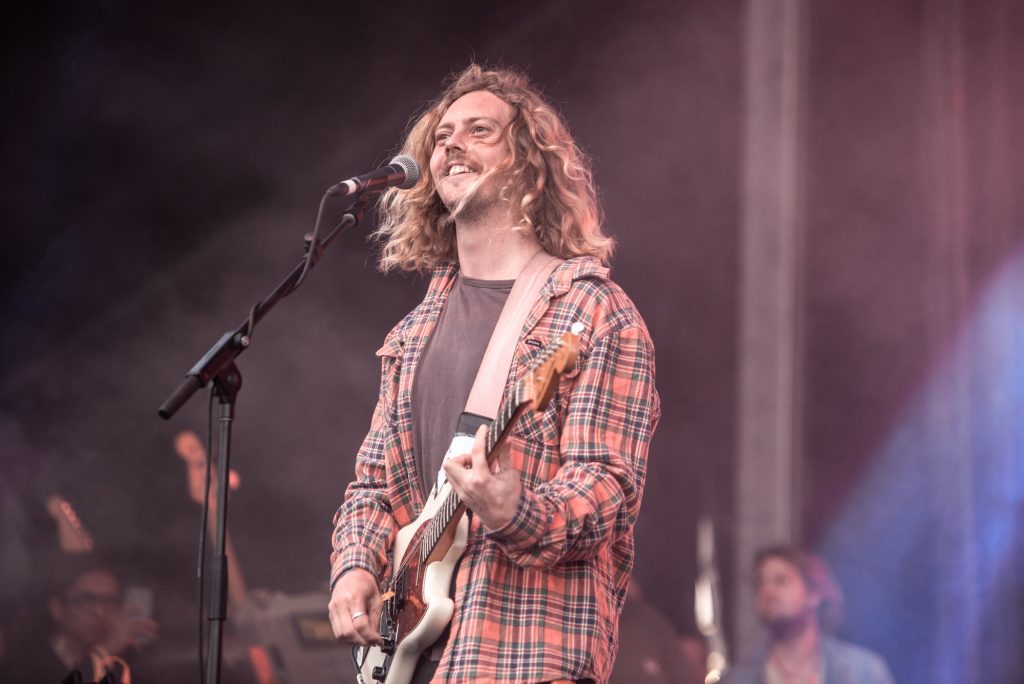 Day two finished much like day one, but probably on the other end of the spectrum. Experiential DJ Hot Dub Time Machine took the headlining slot of the ‘Yours’ stage. HDTM takes you on a journey through time, playing small snippets of hit songs throughout the last seventy-or-so years. And it’s cool.

At least the first time you see it.

The act however, has not really changed much over the years, bar the addition of a small brass section who seem to force themselves into hits that don’t really have or require brass. Kind of a let down to an otherwise eclectic day of music in all honesty.

There are two takeaways that I got from Yours and Owls 2019.

One: Sisters are doin’ it for themselves! Lots of female representation and appreciation on the stage.
And two: you should always save the best for last. Cheers to Yours and Owls for the good times. Keep up the good work!