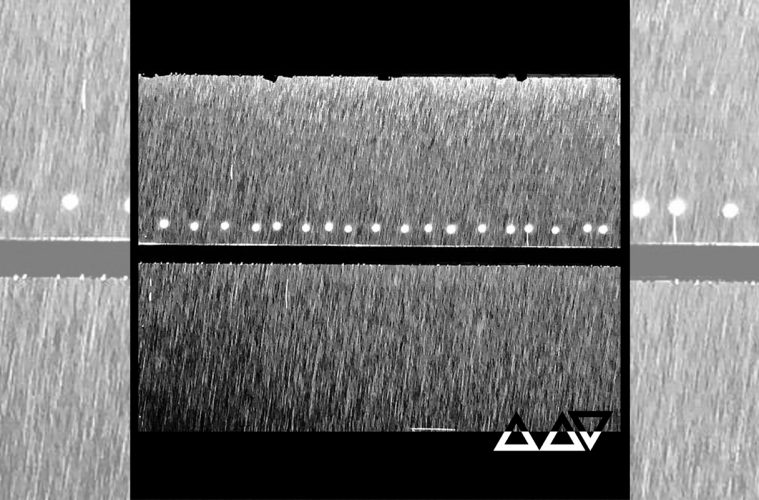 Vennart: In the Dead, Dead Wood

Quiet notes, then gentle guitar, then percussion and other sounds slowly come in. After a few seconds of a sense of waking up it all explodes in sound. “Silhouette” doesn’t stuff around; it keeps its introduction short so it can quickly launch into what seems like a celebratory morning sunrise of sorts, though with something a little more critical and serious lurking underneath. The choruses punch, the vocals have a nice layering and it’s thick noisy bass. It keeps on rising, getting more and more climactic and growing in sound, but never losing control. Bit of screaming. This is a melodic, tight opener. Takes heaviness as a sound and turns it around into something perhaps a bit poppier. Just an all-around great song not beholden to being just an introduction.

A sort of thick, bass and drum dance kicks off “Super Sleuth”, which has Mike Vennart doing this smooth, floaty singing thing. The choruses get a bit more menacing and it all feels like some sort of noirish exploration. The solo is interesting and fun and provides a nice transition from chorus to verse. Toward the end light piano work provides a slight pause, then the song shifts into BIGNESS and glorious, menacing excess that feels so fitting and so right. It’s all thick, with Vennart’s screaming his head off, meeting the filthy guitar and bass, and pounding drums. Real delicious stuff.

After “Super Sleuth” “Elemental” offers a breather. Everything’s a bit softer and more sparse until the choruses which go for a thick, heavy and expansive sound. It’s a procession of quiet verses and loud choruses but (despite the drastic shift in sound) it doesn’t feel forced; rather, it feels fitting. The song retains its sense of calmness despite is willingness to impress a sense of loudness and flows better for it.

This calmness carries through to the ending which strips back to Vennart charmingly singing whilst mostly strumming away. The ending feels much more performative than the rest of the song but it still makes sense as the song’s ending.

“Lancelot” finds itself a little more quieter and perhaps a bit more on the melancholic side of things. The vocals carry a sort of confident fragility to them and the song drives forward mostly on gentle synth and steady percussion. The choruses get a little bit more “welcoming” in a sense, though maybe it’s more of a resignation to behaviour. There’s a straightforward uncertainty to it, much like what lyrics have appeared before and what will appear later.

“Lancelot” ends a bit more guitar-dominant and strangely triumphant sounding, yet still retains that sense of melancholy. The closing is big, but it doesn’t quite feel big.

In The Dead, Dead Wood‘s “In The Dead, Dead Wood” breaks things up a little with something more “active, yet ambient”, though not necessarily any less dramatic than the louder stuff on the album. It’s grand, mysterious and perhaps foreboding, and feels like it grow louder the further it runs. On an album of strong, emotive music, this one might just be the strongest. It feels naked, raw and highly affecting in a way that feels as though Vennart is standing there, baring his entirety for all despite a desire to not do so.

After this “Weight In Gold” comes on, sounding almost as though it’s a companion to “Silhouette”. It starts with some quiet and unassuming strumming, then launches into being this massive force. The instruments create a thick, almost anthemic sound and Vennart’s vocals appear somewhere among it, somewhat-indistinct among the focused noise whilst still distinctly impassioned. There’s a bit more going on with this one than initial listens imply, but it’s also highly straightforward, direct stuff.

Rather than throw something else thick and fuzzed out, “Mourning On The Range” sounds much drier and spaced. Some rolling percussion, “clean” guitar and steady bass kick this one off. Vocals hold in a slinking tone that seemingly expresses resignation and (in places) a sense of pleading. Something mysterious creeps into the next section which gets a bit more lively and dramatic, but maintains the space. After this the song becomes a little more cinematic, feeling as though this could be part of some slick spy film. It also feels as though it’s a take on funk; perhaps it’s “anti-funk”.

The sections tastefully repeat, then there’s a break where the song becomes something else as though it briefly surfaces from the proceedings before deciding to get back into what was going on. The “anti-funk” thing becomes the album’s closing section, though meaner in sound than before. The song ends on a decisive word that sticks out in an impactful way; It’s striking, clear, and commands attention, perhaps due to the song’s heaviness suddenly dropping away.

Up to this point In The Dead, Dead, Wood feels like a punchy record. It’s not all that; there’s a good deal of variation that helps its expressive nature, but there’s many big riff moments done with oomph and regularity. “Forc In The Road” provides a stark shift whilst remaining highly fitting. Percussion steadily keeps space, ambient sounds draw out and slowly shift, and bass builds on structure with a precise cycle of notes. Guitar plays to the space and sounds both measured and (in a sense) fragile. Vennart’s vocals keep slow and clear, letting the lyrics come through with weight. Occasionally piano sounds add more depth by also playing with space and working within the main melody.

As “Forc In The Road” proceeds, somewhere underneath it a guitar starts to roar thick, adding more mass and filling the space. At times it threatens to burst forth and engulf the procession – and it almost does – but it remains unable to and eventually fades away. The fragile space returns with only a few sounds remaining until eventually the song closes. “Forc In The Road” is one of the heaviest songs on the album. Its sense of space and its willingness to move slowly allows for its emotional content to easily come forward. It doesn’t hit hard; it permeates without feeling sluggish.

Rather than end there, In The Dead, Dead Wood fits in one more song. “Concierge” is carries lots of synth, simple bass and skipping percussion. Vennart sings with weight; at the same time he sounds detached and partially drained. There’s a shiny and shimmering that contrasts against the lyrics and leads to the whole songs feel like a band is playing it in some sort of old pub lounge room, if that makes sense. The song is deceptively lighter in sound than most of the album, but it still works in capping off the whole thing.

Much of the album feels as emotionally weighty; some of which has to do with the vocals and lyrics. Vennart isn’t always direct in what he sings and works on providing a lot of emotional shape. That’s not to say that meaning isn’t part of what he does as he still is able to carry that through quite well. However, often there’s a way that he writes and delivers where initial impression can cast doubt due to a sense of the indirect, seemingly looking to draw out the content beyond the surface rather than just put everything out in the open. A bit of that is here, but more often the words feel much more openly personal than usual. That said, perhaps due to there being no vocals, it is the title track that feels the most emotionally raw and open.

Often when an artist is expressing themselves in this manner the results vary from being not enough to too much. In The Dead, Dead Wood strikes a balance; the weight is there, but the songs help alleviate that weight. There’s enough lingering on things, but only enough; never more than necessary. There are moments of excess but they feel appropriate and earned, and the album just seems to glide. As such, In The Dead, Dead Wood is a whole and complete work, effective in its expression and execution.

In The Dead, Dead Wood is available here.