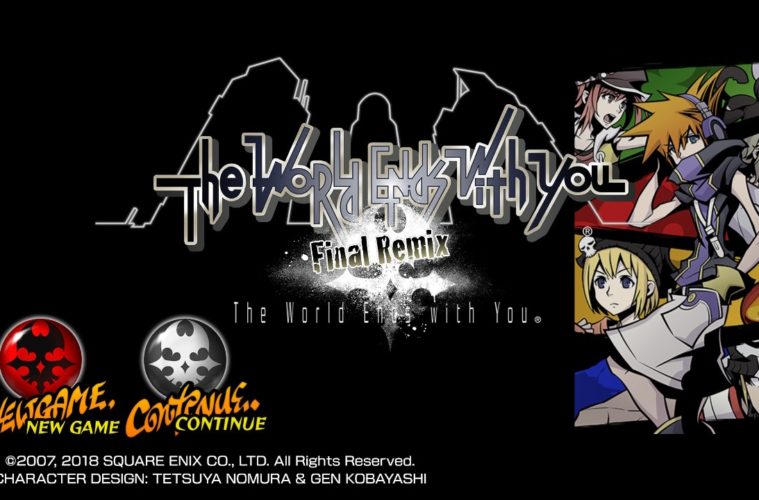 The World Ends With You: Final Remix, or How I Learned to Love RSI Review

For the majority of gamers who grew up with the Nintendo DS, many games come to mind that encapsulate the innovation that the system brought forward. Mario Kart DS, Pokemon Diamond/Pearl, Dr. Kawashima’s Brain Training: How Old Is Your Brain?, and Phoenix Wright: Ace Attorney are some of the games that come to mind.

One DS game would rise to the status of a cult classic, becoming widely regarded as one of the best games made for the platform.

The World Ends With You (released in Japan as すばらしきこのせかい Subarashiki Kono Sekai, literally translating as “It’s a Wonderful Life”) released in Japan on July 27th, 2007 to great acclaim. After a lengthy 9 month translation period, on April 22nd 2008 it launched in the US. It arrived in Australia two days later on April 24th 2008. At the time critics lauded it for its story, its innovative gameplay and the use of the dual screen layout being its most standout feature.

TWEWY was a co-development between JRPG giants Square Enix and Jupiter. Jupiter worked with Nintendo on games such as the Pokemon Pinball series for the Game Boy Colour/Advance. They also co-developed the most well-known Game Boy peripheral; the Game Boy Camera.

The game would receive an updated version a few years later. The iOS and Android versions released in 2012 and 2014 respectively were handled by developer h.a.n.d. They are most notable for working on the Kingdom Hearts games for the DS: 358/2 Days and Re:coded. Dubbed “Solo Remix” as the subtitle, this version boasted a revised single screen experience. The release contained updated sprites, backgrounds, and a revised soundtrack. With the shift to single screen gameplay, many fans felt this changed the core of the game, and saw fit to condemn it as a weaker release. However, the port was highly-regarded by critics.

Earlier this year, Nintendo announced that TWEWY would arrive to the Switch. This move surely surprised the fanbase. It added fuel to the fire of a possible sequel; something fans have been going rabid for. Since its release on the Switch in Japan on September 27th, and October 12th in the rest of the world, this is the first time this game has made its way to a home console. 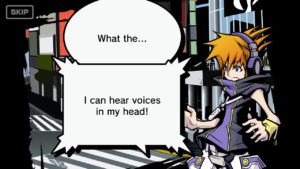 In TWEWY you step into the shoes of Neku Sakuraba; a boy who lost his memories as he enters the Reaper’s Game. Fighting the Noise – grotesque depictions of natural fauna – and the Reapers themselves, he must win in 7 days. If he does not, he’ll lose what is most important to him: his life. In a twisted version of Japan’s Shibuya district, players will find themselves engrossed in a story full of emotion and many plot twists even Shyamalan would approve of.

Heralded for its dynamic combat difficulty, TWEWY had the ability to decrease your current level, affecting your stats, and showcased four different difficulties to choose from. Alongside chaining battles and facing off against different classes of Noise, this attributed to arguably one of the most customisable difficulty settings in a game to date. 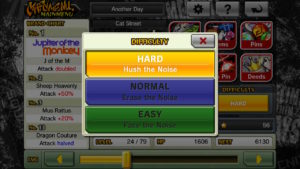 The DS version of TWEWY employed a hybrid touch/controller style of gameplay. It also utilised some of the DS’ more underused features such as its microphone to make attacks. This made some of the attacks in this game more gimmicky, but it used the DS to its full potential. This also made for some crazy dynamic gameplay.

Neku fights alongside a partner, utilising the top screen and either the D-Pad or the face buttons to make attacks against the Noise using a “combo map”. A “light puck” would pass between Neku and the Partner, making attacks more powerful. Also to consider was the partner’s stats and health. Using these battle mechanics, this made battles more strategic and it overall made the combat enjoyable and unique. 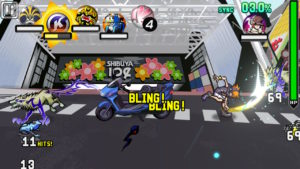 When TWEWY came to mobile, some of the attacks ended up replaced with touchscreen gestures. Some of these included scratching a spot on the screen and drawing circles around an enemy. This made the mobile versions more cramped and less gimmicky than the DS version. The game lost some of its charm, despite the upgrades to the graphics and music. This also made the combat less strategic by taking away what was core to the combat in the original. Partners were now invincible in game. Any stat boosts or HP boosts went straight to Neku, making battles a cakewalk compared to the DS release. 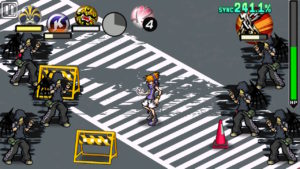 TWEWY: Final Remix on the Switch is, at its core, a port of the mobile version. However, it has some Switch-exclusive gameplay tweaks and content. These tweaks include the choice to use either the touchscreen, or the left or right Joy-Cons (yes, only one), allowing for multiple play styles; the inclusion of a co-op mode where a second player can use the second Joy-Con to control Neku’s Partner; a further expanded ost with new remixes and live tracks, and an additional story chapter. However, most of the content and gameplay styles feel tacked on and seem like a hasty afterthought.

The touchscreen on the Switch seems a tad unwieldy for this style of RPG. At times the 6.2-inch screen feels a little too large to use with the Joy-Cons docked. Even with them undocked, there seems to be no comfortable way to hold the console whilst playing. The only other way to play is in docked mode or tabletop mode using a single Joy-Con. This is where the game really has some issues, although with some practise it can be easy to acclimatise to the awkward controls. 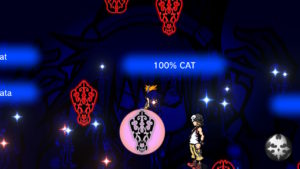 Think of the way the Joy-Con is used in Final Remix as the Wiimote is used vertically on some Wii games. Some of the attacks and movement in the game can either be slow and fluid, or rapid and unwieldy. Throughout multiple gameplay sessions I noticed some of the finer, and some of the more flamboyant movements of the Joy-Con made my wrist writhe in pain. There should be a warning at the start along the lines of “THIS GAME MAY CAUSE EXCRUCIATING WRIST PAIN”.

Here’s where the control system fails:

Even a slight touch by a knuckle or a finger on the screen reverts it to touchscreen mode. You’ll then need to re-initialise the Joy-Con again to continue. It makes the process of switching between touch and controller rather extraneous. More importantly, this can be more rage-inducing if you’re in a very difficult battle, where one hit equals an easy game over. Thankfully the game has always had a retry system implemented. However, it does not excuse the baked in terrible control scheme.

A callback to the DS’ hybrid control scheme with the Joy-Cons still docked would have worked really well here. The game literally begs to be played with the left hand using the controls, and the right a finger or rubber-tipped stylus. In my opinion this would feel more ergonomic and enjoyable to play.

The game looks as amazing as ever. The dysfunctional and fashionista-inspired depiction of Shibuya looks at home among the many different games that have now been released on what is arguably Nintendo’s most innovative console yet.

TWEWY’s quirky comic stylings help breathe life into this depiction of Shibuya. Obvious references to the Hachiko Statue, the 109 building (renamed 104) and the Scramble Crossing can be found alongside more obscure references to the Moyai statue, Cat Street and other places in Shibuya; locations that are definitely worth visiting, should you ever get a chance. With an art team headed by Tetsuya Nomura (most known for his artwork in the Final Fantasy and Kingdom Hearts series), the higher resolution battle and overworld backgrounds help strengthen the game’s character. 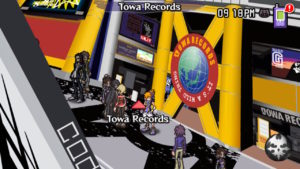 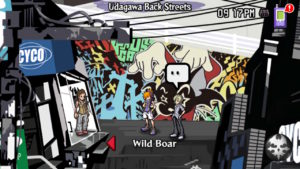 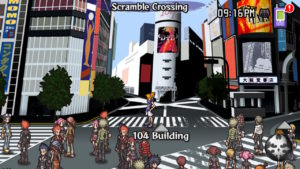 The remixed OST contains an amazing 92+ tracks to hear in game, so the music will not go stale. With differing genres from J-Pop, rock, electronica, hip-hop, and many others, this would have to be the most eclectic mix of original music in a game to date. There’s something for everyone in here. No track seems to outstay its welcome and there’s enough variety to keep things fresh and vibrant. Against the backdrop of TWEWY’s Shibuya, the OST is as outstanding and dynamic as the world itself.

The new story chapter “A New Day” seems to be more of a lazy afterthought than a meaningful attempt at extending the game’s life. It contains harder enemies, new items and a remixed map layout. The story lasts less than three hours, rehashes minor story elements and serves to only bait you into hoping there will be a sequel. With references to a now-defunct Japanese mobile TWEWY title, there’s almost no actual progression story-wise. “A New Day” does not bring much to the table. If anything, it’s a way to test your skills, as if the chapter wasn’t enough to test your mettle.

There’s definitely some replay value here however, with additional challenges being unlocked after finishing TWEWY.  Present in the original, they sought to flesh out some of the backstory of the Reapers, their Game, and the identities of certain individuals. These post-game challenges are present within “A New Day” as well, bringing more to its story, if you so desire. This also means subjugating yourself to more of the same gameplay, so your chances of RSI will substantially increase.

All in all, this is a flawed port with some glaring oversights. I must admit; I was hoping that at some point the rose-coloured hype/nostalgia glasses would blind me from the horrible truth. This game could have done better in my opinion. It could have used some more tweaks to the gameplay to better suit the Switch. On top of that, the extra content just feels like Square Enix and h.a.n.d. decided to give long-term fans a tease. This ultimately left me wanting more, but also I felt rather deflated. There should have been more content to substantiate the $70 price tag it commands. Despite that, the main story is still enjoyable, though my wrist won’t let me forget this terrible port. 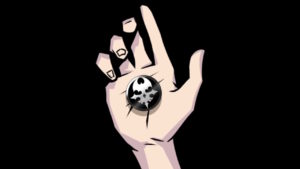 You can find The World Ends With You: Final Remix on the Nintendo Switch eShop or at your local video game retailer.