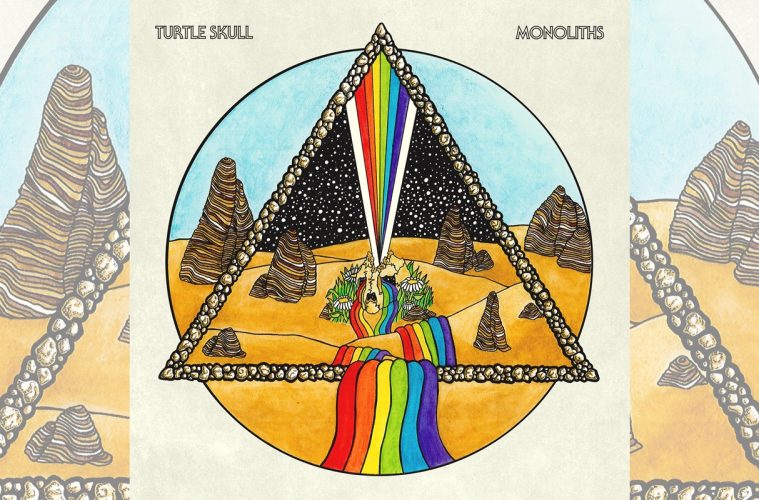 If not enough people do enough to grow the genre and move it forward, instead relying on trotting out the same tired riffs with great excuse used to justify a lack of imagination, then there’s little room for anything interesting and so much of it becomes forgettable. Admittedly that’s probably quite harsh, but we’re so happy with music that’s more congratulatory it’s own achievement of sticking firmly within a thin veneer of style hiding self-assured smugness than it is self-assured in exploration. Nothing wrong with liking those sounds, but if you’re just going to be a tribute band, then what’s the point?

Maybe I haven’t heard enough stuff challenging the notions of psychedelic music in current times.
Maybe I’m just grouchy and don’t get it, for whatever given value “it” holds.

That all said, on Monoliths Turtle Skull do enough to explore psychedelic rock whilst not remaining entirely beholden to its trappings.

Probably the first thing to note about Monoliths is that it is a wide-sounding album. Soundscapes seem to stretch off into the distance through riffs drawing themselves out over punchy, impactful percussion. Somewhere among it all vocals often hover above it all, seemingly detached from the music but sticking close to it. There’s slow chanting, doomy, sludgy and poppy stuff spread throughout in what sounds like a rather compressed, yet dry mix.

Throughout the songs there’s a sense of a journey, though this is more due to the performance aspect over anything else. Scenes grow and move as the music keeps rolling forward. It starts with “leaves”, and movies into the hazy-sounding “Rabbit”. Once the airy stomper “Why Do You Ask? comes around, there’s more thrust and drive in what’s proceeding forward; there’s more certainty.

“Who Cares What You Think” and “Halcyon” bring the scenery to something akin to gliding over an area, whilst also containing meditative qualities. “Apple of Your Eye” strips things back a little bit and makes everything a bit more “hypnotic”, then “The Clock Strikes Forever” closes the album on a celebratory-sounding note; first by building into something massive, then crashing into a warm and pleasing drone.

The psych stuff permeates the whole album in the way a broken bottle of perfume permeates through a room; it’s everywhere and it’s unavoidable. What Turtle Skill do is lean into it, stretch it out and play with it a little rather than play it straight the whole time. Sometimes it’ll be something more of a “flick” on a heavy groove; other times it’ll be to give a sludgy moment more of a grip. However, at times the band lean on the psych stuff too much and it becomes a bit of a crutch, taking over the song more than it should. Not so much that the music’s spell breaks, but enough to make stuff less impactful and gripping.

So sometimes Turtle Skull are a little too willing to root themselves firmly within familiar territory. So what? as Monoliths feels like one giant song, it does weaken the impact a bit more than desired. However, as said before, the band play around with it a bit. The psychedelic influence is strong, but it’s not the driving force which helps the whole thing stand out much, much more. The mix isn’t the greatest, but the songs suffer little for it. There’s plenty to enjoy and get into with this album. It makes for a satisfying listen.