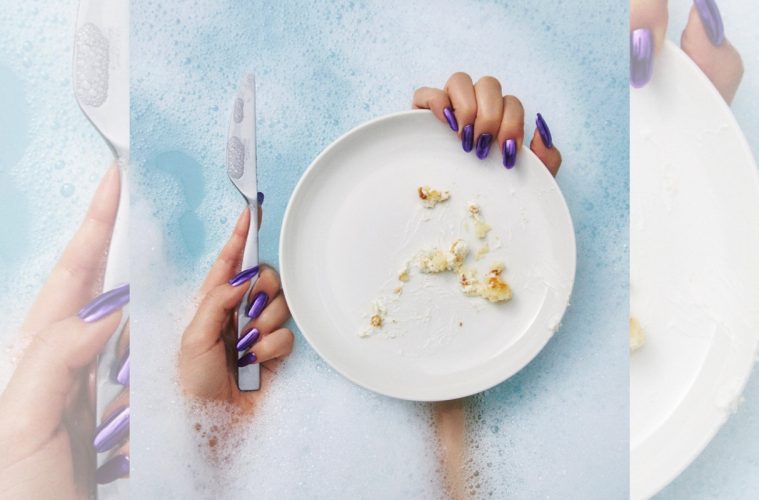 10 (Jū) starts with “You” (“おまえ”), an energetic track that mostly follows a straightforward, high energy route. There are a few twists and turns along the way but the flow doesn’t lose sight of its path. Quick and punchy percussion, passionate vocals, and (mostly) hard-hitting guitar and thick bass keep the song sounding thick and full; no doubt aided in part by tricot’s deft and vigorous performance.

From there tricot play around and push outward a bit. “Summer Night Town” (“サマーナイトタウン”) sounds like it takes queues from disco and “WARP” from disco and funk. The intricate “Box” (“箱”) goes for rhythmic interplay between all instruments, whilst keeping percussion in strong focus. Comparatively “Fried Rice” (“炒飯”) keeps things much more simple, laid-back and airy.

“I Won’t Give It” (“あげない”) starts sounding relaxed and soothing and remains as such. The bass is thick and the drums strike out, but the song doesn’t push itself as some energetic rush. Near its end the song blooms into a wider version of itself. From start to finish it sticks to one pattern, but tricot make the most of it through how they grow the song. It’s direct, but expansive and atmospheric enough to stop it feeling one-note.

Essentially 10 is an exploratory album which works in some places and not so much others. “Box’s” middle section is an appreciable shift, but its adaptation for closing the song, whilst enjoyable, doesn’t gel with what felt like a natural conclusion. “Prank’s” (“悪戯”) angular playing drives a strong melody forward until, in the second half it almost suddenly and awkwardly finds its momentum halted for what feels like an enjoyable, yet intentionally awkward jam on the opening verse’s pattern.

“Ghost Ship” (“幽霊船”) sees tricot bringing in a heavy melodic focus and keeps itself balanced quite well. There are some smooth shifts that feel playful without taking away from the emotional thrust; At the same time song’s main melody and its big choruses, whilst appreciable, speak far too much of familiarity, almost as though tricot found themselves willingly lost in a long-gone crowd. It’s also something tricot have done far, far better with 3‘s “Wabi-Sabi” (“侘寂”), which held a similar approach whilst not feeling so firmly rooted in the past.

One 10‘s highlights is the album’s version of “Laststep”. A song seemingly about desiring some sort of freedom, it keeps things at a “slow” flow, allowing both the lyrics and music to carry a sense of heartfelt longing. In a sense it ramps up and allows itself to flow with ease. Its closing passage is much harder in sound than its start, but the song doesn’t lose sight of itself at any given point.

Having “Laststep” end the album would make for a great choice. It neatly concludes and ties up a variable album and sort of bookends this period of tricot. Being one of their earlier-released songs in a new form that sounds definitive the whole way through helps to bookend tricot’s first ten years as a band. However, more importantly, it plays to tricot’s strengths well without announcing them.

Instead the album ends with “Body” (“體”). It starts as a tightly-constructed drive into something “heavier” before becoming that sort of unravels itself (so to speak). Without saying too much else, it fits with in terms of tricot experimenting with their sound. However, it feels more like its inclusion was so there were ten tracks rather than for what it provided. Maybe it’s a hint on how the next album will sound; maybe not.

“Body” is a solid song and it sounds like a closer, but it doesn’t quite cut it as it sounds too far and away from everything else to quite work.

10 is a mixed bag; Whilst it is enjoyable, it is inconsistent in places. As a group tricot know how to work with each other to get the most out of their music. As such, the performances are excellent; all the guitar, bass, vocal and percussion really knocks it out of the park. It’s difficult to fault that aspect, as well as tricot’s desire to grow and refine. That said, some stuff transitions awkwardly and some songs don’t feel as though they developed enough. Perhaps more refinement was necessary.

Considering that 10 is (in a sense) celebratory and commemorative, the sense of experimenting works as it allows tricot to touch on their past without being completely beholden to it. Not everything hits the mark, but overall none of the songs are bad and the album makes for a satisfying listen.