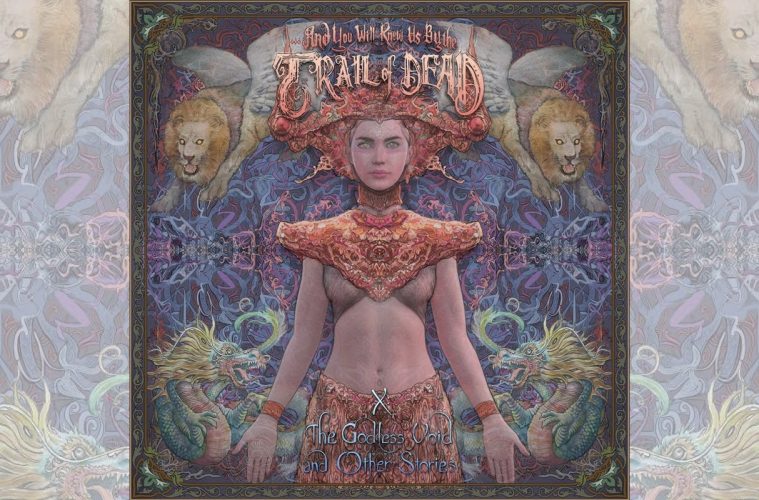 …And You Will Know Us by the Trail of Dead: X: The Godless Void and Other Stories

The Godless Void opens with the appropriately-titled “The Opening Crescendo”, as that’s a lot of what the song is. It’s fine enough and has appreciable textural qualities but over repeat listens it increasingly feels like filler. The following “All Who Wander” makes use of the same melodic pattern, adds something to it and overall stands as a better candidate for album opener. It carries all the grandiosity Trail of Dead easily pull off whilst keeping it all sound tight and fully formed. If “The Opening Crescendo” was shorter and better connected to “All Who Wander”, or any of the other songs that carry its motif, then inclusion may have been justified. As it is, it feels disconnected and unwarranted.

“All Who Wander” is a standout track, though there certainly are others. “Into the Godless Void” is a driving, soaring song that seems to be speeding off into the fantastic. “Don’t Look Down” takes on a breezier, more melancholic feeling whilst retaining a sense of continual flow.

“Blade of Wind” takes on a rather triumphant, almost escalating feel that seems to stretch before it gives way to ambient sounds. “Through the Sunlit Door” follows on and also carries a sense of the triumphant, though in a much more grand way befitting of this album’s closer.

When it comes to the songs there’s a lot of care in the composition and sound design that helps them feel whole. Nothing veers into too complex or too simple; the layering works just enough and no more, the design helps keep things expressive and moving, and it all feels just right.

The vocals work with the song structures and make for a good fit, often seeming as though they’re following songs rather than the other way around. Often the lyrics seem as though they lean either toward the societal or personal; sometimes it’s clear and sometimes it’s ambiguous. What is clear is that there’s a weight to the words; there’s a desire to get across meaning and expression. Admittedly it’s something that Trail of Dead are familiar with; Their lyrics alternate between direct and indirect whilst seemingly going for an ornate style. Sometimes it hasn’t worked, but on The Godless Void it really shines.

On an individual level a lot of the songs work. However, the longer the album runs the more it drags. Dropping a few of the songs would’ve helped, though aside from “The Opening Crescendo”, there’s no clear choices as they’re all welcome inclusions.

Compounding on this is how flat the songs sound. Plenty of songs imply a peak but sound held back from fully reaching that point. The quieter sections don’t sound much quieter than their louder counterparts which would be fine if the songs weren’t wanting for space. These are songs that need more range to move around in. There’s a lot of liveliness in the music but for some reason there’s far more restriction on their range than necessary.

That said, despite The Godless Void‘s flaws a lot of its strengths comes through. Trail of Dead have crafted a fine collection of songs. They spent a bit more time than their usual on this one and it paid off. The album is exploratory without meandering and meaningful without being overwrought. It’s the right amount of tight and loose and has the right balance between words and music.

Jason Reece and Conrad Keely know what their core sound is; they have for a long time. The Godless Void sees them refusing to rely on that. The album does sound unmistakably like Trail of Dead; It’s clearly them, but as always they’re pushing forward and not backwards.

X: The Godless Void and Other Stories is available here.