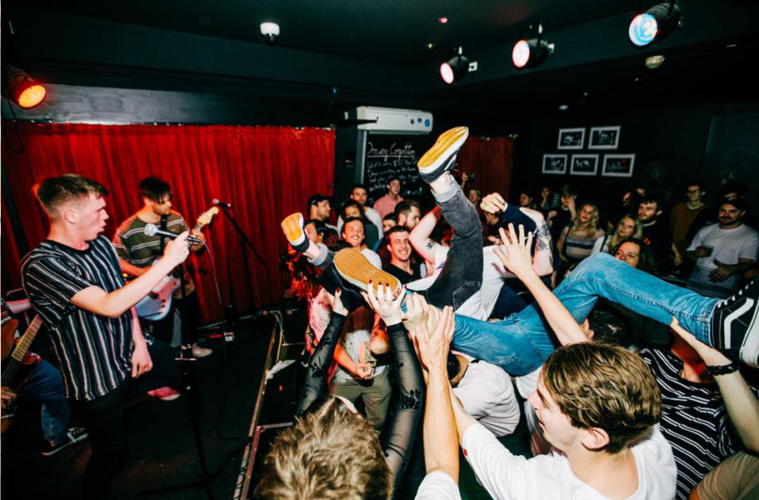 There aren’t many better ways to headline a new city for the first time with a sold-out show. For Melbourne’s Stuck Out, this was their reality as they hit the road to celebrate the release of their EP You Won’t Come Home. Supported by a mixed bill of outstanding Sydney talent, the five-piece visited Sydney’s Brighton Up Bar on Friday night.

As punters filtered in, Sydney melodic hardcore outfit Bloom kicked off proceedings. Channelling influence from the likes of Perspectives and Sierra, the set was both energetic and emotionally driven. Blasting through the entirety of their recently released EP Past Tense and a tasteful cover of Touché Amoré’s “Just Exist“, both new and old fans alike would be positively satisfied with what they had seen. Bloom’s passion is unmistakable. Perhaps the only thing greater than their musical proficiency is the comedic attempts of frontman Hawkey.

Almost a complete 180 from the prior bands, Amends brought their distinct brand of rock and roll to the stage. Featuring more cowbell than the 2006 smash hit Barnyard and enough harmonica to match, one of the only notes I managed to scramble down amid thoroughly enjoying the band’s set was “yeeeHAW”. The five-piece were fun and amusing, and had song names as fantastic as “Your Mum’s Upset”. I don’t think I’ve ever laughed so much at a band’s set that I actually liked. In between threatening to fight patron’s over the quality of Adam Sandler’s acting, Amends’ set was delightfully wholesome. The Western Sydney crew provided a welcome transition from the emotionally heavy music that preceded them.

Following Amends were Sydney crew Whatever, Forever. Further diversifying the bill, the punks brought fervent melodies and let their music do the talking. Playing songs from their debut EP Teach Me What Love is Again and their 2017 three-track Decay, the five-piece excelled at building the atmosphere in preparation for the night’s headlining act.

The set included the recently released single “Bridges” and “Whispers”. The highlight of Whatever, Forever’s set came during the latter; the pulsating nature of the song hammered away at listeners, leaving them unable to do anything but head-bang in unison. Vocalist Godwin deserves an award for scariest front-man. With angry eyes comparable to those of Mr. Potato Head, he left viewers in awe of his undeniable passion for music.

As the night approached its end, rockers Stuck Out took to the stage to perform the set that most had come to see. As it is on the band’s EP, the set began with “Stitch”; a short but punchy track that set the tempo for the songs to come. Maintaining the upbeat feeling, the band thundered into hard-hitting tracks “Self Doubt” and “Headstrong”. The infectious nature of the music was obvious. Regardless of familiarity with the band, it was impossible for listeners to not pick up what Stuck Out were throwing down. As they hammered through “Grin”, front-man Walker took the set in his own hands and pushed it to another level as his energy radiated through the room.

Things only picked up from that point, as the quintet launched into a cover of scene heavyweights Basement’s Whole. As the crowd-surfing commenced and the push-pit began to open up, every note, drum beat and syllable held extra weight as Stuck Out continued. Finishing the set with an even spread of songs from You Won’t Come Home and their previous three-track What We’ve Come to Be the band closed on lead single “Fade Away”. With mic grabs aplenty, the set was genuinely memorable for those in attendance. Stuck Out provided the soundtrack to a high energy and enjoyable night.

You Won’t Come Home is a fantastic EP. It’s execution live was a more than adequate way for the band to undergo their first interstate headline tour.