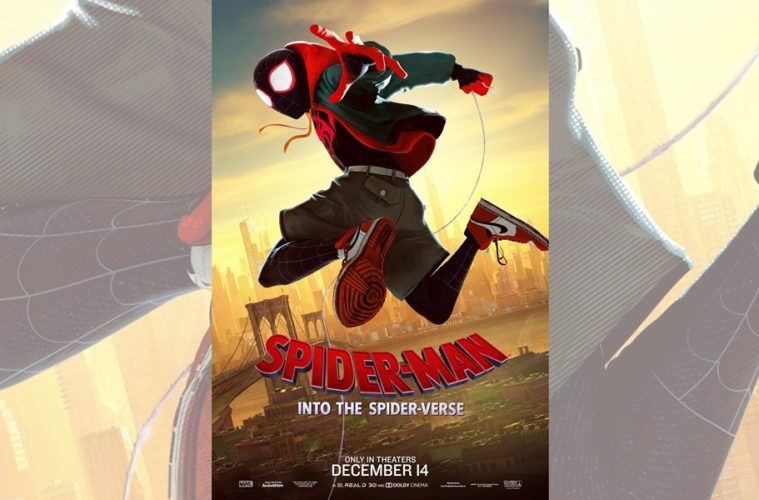 Spider-Man: Into the Spider-Verse Review

Peter Parker is Spider-Man, well-loved hero of New York City. He’s been fighting crime for a few years and has earned the respect of his city’s citizens. He’s done well and overall he’s seen much success.

It is Miles Morales’ first day attending a new school. Miles gets embarrassed by his dad, gets confused and expresses a clear desire to go back to his original school.

Later on in the day a spider bites Miles. Soon after this happens he switches from being the viewpoint character to the main. Both literally and metaphorically Peter Parker exits the film (although his presence does linger) as he gives the main task to Miles. However, soon Peter B. Parker shows up and… wait; another Peter Parker?

The way that Spider Man: Into The Spider-Verse delivers the origin story is both familiar and new. Spider-Man in this setting both exists and is yet to exist. Whilst the origin story is once more told throughout the entirety of the film, this time everything important gets established early. You learn the goal and the reason to stop it, why the Spider-people are appearing and why Miles wants to see the goal to the end.

The main villain’s impetus comes a little later into the film. In good application of “show, don’t tell”, Kingpins’ motivation become clear. There’s not many words spent on them after as there’s no need. Regardless of intentions, Kingpin is doing something dangerous and it needs to be prevented. Furthermore, the main characters don’t learn much about his motivations either. Just enough when required to give that bit of extra drive. Ultimately this version of Kingpin has understandable motivations, but he is no less antagonistic and no more tragic.

The origin stuff does feel a little slow, but we’re not spent waiting to find out what needs to be done. There’s no mystery surrounding that stuff and information is doled out at a decent pace. Furthermore, making the end goal known early is less insulting to the audience’s intelligence. There are more important things to worry about and the film doesn’t pretend otherwise.

I could be off the mark, but a lot of the film seems to be based around how loss affects people. The secondary Spider-Man is broken due to the loss of family (both willingly and otherwise). Spider-Woman is driven by guilt over the death of her best friend. Miles Morales deals with the belief of failure on his part. Kingpin fails to accept the responsibility of his actions and in turn cannot accept loss. And so on.

What …Spider-Verse does well over many other of the Marvel films is pacing. This is a slickly-edited film. Although some of the discovery stuff lags ever-so-slightly, most bits get in and out and give as much as strictly necessary. The film’s pace is really quick, humour is used well and mostly appropriately, and anything saddening is earned.

Speaking of which, the more emotional parts really have the ability to hit hard.
…Spider-Verse is not a film that beats you over the head in an attempt to make you like the characters. Many of them are relateable in some sense and in their own way, charming. There’s little new when it comes to the archetypes, but they’re handled well enough so that they don’t wear on you. Whilst some of this has a bit to do with the art style, a lot of it has to do with the actors.

Each actor puts in a fine performance. Often it sounds as though they were told that all that there would be was the voice to make the characters believable, as there is a lot of passion in the deliveries. There’s pull back and force when necessary. The actors embody their characters really well and do a fine job of bringing them to life.

Due to the way the characters are presented, when something emotive happens it tends to be more impacting. Spider-Man: Into the Spider-Verse is a stylised film, but the characters and a number of events are strongly based on some very real situations. Certain things are presented as pretty sudden which is generally how they’d happen in real life, and as such there’s more of a pull.

The chemistry between the characters isn’t the strongest, but it helps sell the characters better. The Spider-people are in a sense familiar strangers. Given the short amount of time the characters have to know each other, it’s understandable that they wouldn’t have the ability to bounce off of each other well (although that is kind of half-crossed). It’s not so much that by the end of the film strong bonds are developed, but more of a growing respect and appreciation for each other.

Of course the animation helps quite a fair bit. Each of the Spider-people has a slightly different style which helps reinforce their origins and personality. It helps them feel a bit more unique and different from each other in a good way. I won’t say much about the animation style itself, but even if you aren’t a fan it is still appreciable. It does a lot to make the characters feel more vibrant.

The animation also helps make New York City feel more alive. Much of it seems to stand out really well, the colouring is really strong (and really comes through to help “paint” the scenes when necessary).

Outside of that, the music’s a bit of a mix. Some of it works well, some of it doesn’t. It’s there more for atmosphere than it is mood. Still, a good number of the songs picked work decently with the setting and they’re not unwelcome.

Spider-Man: Into the Spider-Verse is much like a well-made pop song. It’s tightly edited, knows when to rise and fall and all the right notes are hit. It’s a very slick and well-crafted movie that knows when to deliver and when to hold off. The crew behind this film can stand proudly with this film. Aside from its technical achievements, what they’ve done best is deliver a film with heart.

Some of it can be a bit on the nose and it isn’t perfect, but Spider-Man: Into the Spider-Verse nonetheless is a film that delivers, and then some.