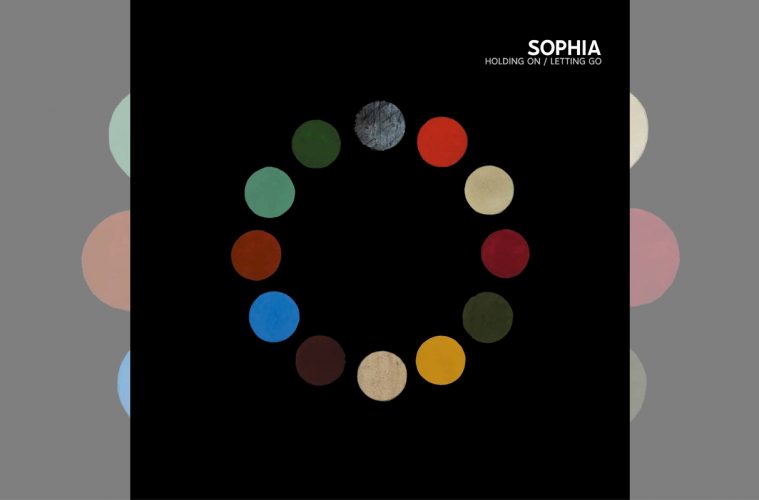 “Strange Attractor” kicks off Holding On / Letting Go with this beeping synth that is a little cheesy at first. As it plays on and some more ambient sounds build on what it’s doing, it gains a bit more of a weighted, dramatic feel; It shifts and solidifies, then really thickly distorted guitar (or bass) comes in and does this little descending thing. Then more guitar, then everyone else comes in and creates a sense of a “driving sadness”. Robin’s vocals are soft, poppy and uncertain, but the song keeps on moving forward, knowing its destination.

“Undone. Again.” follows suit, though with less loudness. The sense of “driving sadness” sticks around, but the tone seems more reflective and perhaps a little less sad. There certainly remains a sense of going a distance, however, and it all carries through simple, yet solid instrumentation creating this really solid, structural sound. There’s some stuff in the background helping carry the tone and Robin Proper-Sheppard sounds more delicate than usual. It’s kind of a different form of Sophia, yet resolutely familiar.

“Wait” sees thing go more wide and “cinematic”. There’s kind of a slinky, sensual darkness to this one. It feels almost like a western which the fragile vocals and soft harmonies help to paint the song firmly of the night. The song is big without being big. There’s a moment for some more broken guitar to come in and play something really looking to wrench out the song’s emotion.

“Alive” strips things back a little and brings in some sexy sax without necessarily being sexy. It’s sort of a mood codifier, expressing a sense of passion and heaviness. It helps that Sophia play this one “slow” and spaciously as when the saxophone shows up, it gets the focus it needs to work for the song. The lyrics which (as far as I’m aware) pertain to questions regarding what sounds like self-destructive tendencies get to feed off what the underlying music provides and overall the mood hangs thick in the air to great effect.

Like “Wait”, “Alive” also feels cinematic, but it’s a different kind of film at this point. Still perhaps the same meaning and intent, but different scenery and plot.

At this point Holding On / Letting Go has been growing heavier in overt mood. However, it’s not all doom and gloom. There certainly is a strong sense of sadness, but there seems to be something buoying it, preventing everything from sinking into the depths. Perhaps it is due to the songs feeling reflective and at times contemplative whilst still being emotive. Maybe it’s due to how quickly the songs seem to go by; not a minute thus far feels wasted and so everything carries forward quite well. It’s good then that the album doesn’t slump in the remaining tracks.

“Gathering the Pieces” carries a sense of minimalism; spaced percussion, simple bass and clean guitar, and background synth keep things going forward, though in a slow manner. There is some additional sounds that add a bit more shape to the song, but they emphasise rather than clutter. The space helps the lyrics really come forward; They seem to express a sense of inevitability whilst also choosing to own up to the mistakes arising from that inevitability.

“Avalon” keeps clean guitar at the forefront and the band playing steadily, once more letting the mood permeate everything. The synth in the background helps to give the song a more gentle, sorrowful feel. I can’t tell if it’s a song about dependency, or choosing to live with hurt, but it’s a really beautiful performance, once more wringing out as much emotion as it can out of everything. It just really hits hard; Everyone’s playing as much as necessary and all the emotion just pours forward. It’s an effective song.

It’s a relief that the more bittersweet-sounding “Days” comes on after. There’s something a bit more relaxed about this song, but like a few songs prior it carries a strong sense of questioning. Providing a bit of lightness whilst keeping the song feeling grounded with the others, “Days” helps just kind of floats along rather than pushes onward. It also highlights Robin Proper-Shepard’s knack for writing poignant lyrics and melodies to support those lyrics.

Following on is “Road Song” which feels much like a road song. The return to a sense of western scenery comes with a sense of the dark. It’s highly rhythmic, very driven and once more holds a sense of questioning. The vocals sound like there’s an aching in the questioning, perhaps to do with the continued sense of reflection interwoven in the album. At the end a noisy guitar “solo” howls out into the song’s night, and once more Sophia make good use of their time.

Suddenly Sophia find themselves rocking out. Based on what Robin Proper-Shepard has said about the song “We See You (Taking Aim)” is the most political Sophia have produced… maybe ever. Though oddly muted, this is just a driving, loud and fuzzed-out rock song that almost feels like Sophia are on some kind of game show. The lyrics hold little room for interpretation; They remain pointed throughout and their delivery makes sure they come with a bite. The song is odd, being relatively brief and feeling unexpected considering what came before… at first. On repeat listens to Holding On / Letting Go it feels more and more like a warranted inclusion.

After “We See You (Taking Aim)” wraps up, Holding On / Letting Go commences its final minutes with something foreboding. Soft sounds ease their way in, slowly drawing out and setting up a sort of uneasy feeling. Soon guitar enters, strumming away and emphasising the atmosphere. Soon it shifts and adds more guitar, building on that mood and creating a sense of space. However, it does not last and the main riff returns. Bass now enters, providing more form to the melody. Eventually percussion enters the fold, precise and steady, creating a firm rhythm.

The soft sounds seemingly grow in prominence as the percussion gains more punch; Specific strikes along a path seemingly walked, seemingly of relation, sadness and all the hardship that it may entail. If everything before this was the Holding On, then maybe this is the Letting Go.

The song has slowly built itself up, but its here where it starts to move toward its climax. Percussion stays precise but also seems to build. Vocal sounds come in forming wordless melodies, building on the sound. The instruments rise and work toward what feels like realisation, acceptance and moving on. The music keeps expanding and as it does it becomes more emotionally affecting. However, before it becomes too much, “Prog Rock Arp (I Know)” ends and so too does the album.

Anyone familiar with Robin Proper-Sheppard’s work knows that he knows his way around a song and how to make it connect; here it’s no different. He doesn’t necessarily hit you hard (though sometimes he does), but what his words convey and how he conveys them sounds naturally effortless. The songs of Holding On / Letting Go mostly inhabit a certain kind of space; as such, he takes on a more softened and fragile, yet firm delivery that suits everything quite well. It enhances the sense of questioning and reflecting without adding nostalgia, letting the emotional content come through without it feeling like its trying to make a cheap grab.

It helps that the others in the band know how to deliver the material and make it click. These are musicians unafraid of doing what is necessary, leaving enough room for mood and tone to get across with ease. The lyrics come in with clarity and the music helps carry them forward; together they make the songs sound both tight and moving.

Holding On / Letting Go is more on the softer side of Sophia’s music, and that’s very much to its benefit. Some of the stuff is perhaps more simple and straightforward than usual, and that too is fine. This is not an album that required urgency; Had these songs been constant loud guitar stuff, they just wouldn’t have worked. Instead of that, Sophia have released another great collection of songs, effective in what they convey and provide.