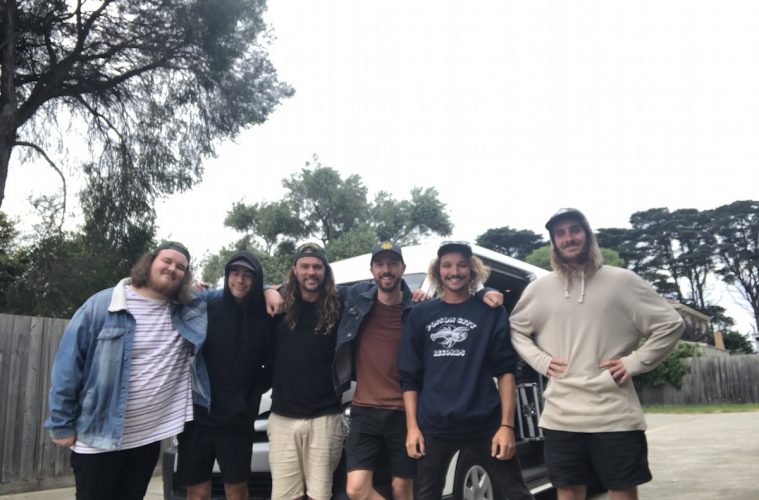 Sly Withers: On The Road With Amy Shark [Tour Diary]

Hey there, my name is Sam and I play in Sly Withers. This here is a little tour diary of our lap around the country supporting Amy Shark in October and November 2019. 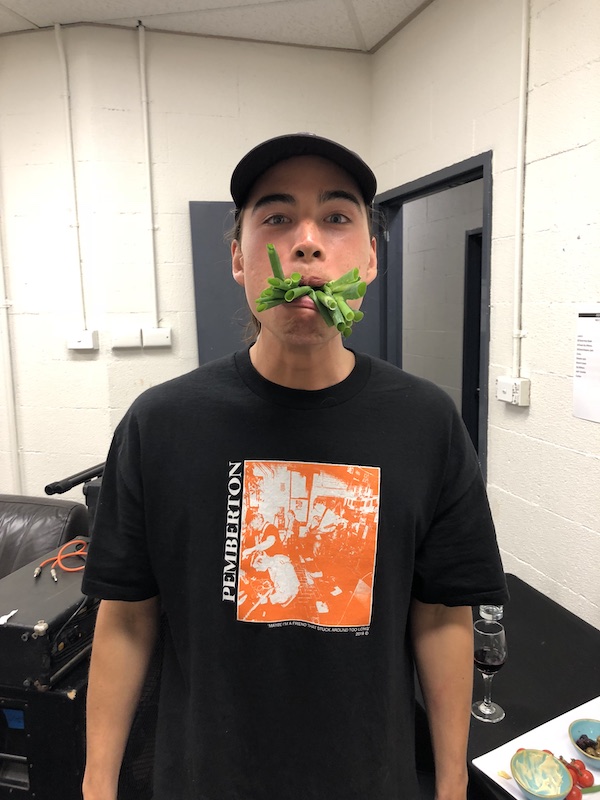 Tour kicked off as it usually does for us Perthians, with a stupidly early morning flight running on pretty much no sleep. Once we got to Sydney, we picked up our hire car and were hell stoked to discover they didn’t have the van we booked, and our only option was to squeeze the four of us and all of our gear into a Nissan X-Trail. Jono had to cop a couple of seatbelt thingos up his butt for the 3 hour drive to Newcastle, but we got there in the end. Thankfully the other support for the tour (aka our lord and saviour, Eleanor Jacks) had spare room in her car to take some of our crap so our Newy to Canberra drive the next day would be much more bearable. The Newy venue was fancy af for a little punk band from Perth like us. This whole run supporting Amy had us in the biggest venues we’ve ever played in and soundcheck that first night was definitely a bit of a shock to the system with all our loud punk noises drifting off into the massive space around us, as opposed to bouncing off the walls right back at us like in the smaller pub rooms we normally play in. Please enjoy this picture of Shea taking advantage of the first platter we’d ever been given backstage by trying to fit as many spring onions as possible into his mouth at once. 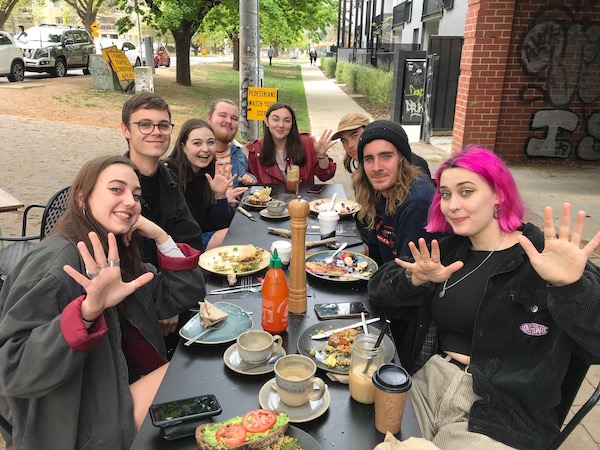 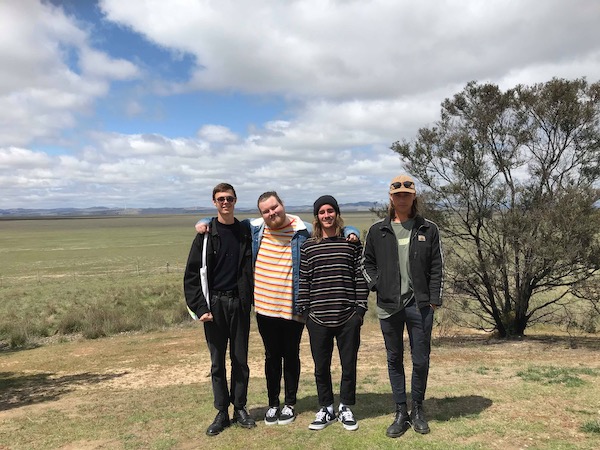 The next morning we got up after catching up on some of the previous night’s lost sleep, grabbed some coffees and got pretty much straight on the road to Canberra. The five hour drive was cool, there’s some pretty things to see on them regional NSW highways. Highlights of the journey included a lengthy discussion on which Hogwarts House we each belonged in… Results were inconclusive. Special shoutout to the expired cans of Guinness we got in our rider in Canberra, that had us thinking we were mature palleted mad dogs when it didn’t taste as much like drinking a steak as we remembered from our previous Guinness encounters. Alas, it was just hella old. Amy’s guitarist Brad thought we were hell cool for having Guinness on our rider though so you win some, you lose some right? Any time we head to Canberra we get very excited to catch up with our lovely siblings, the undisputed queens of Canberra: Teen Jesus and the Jean Teasers, who helped us out tremendously by providing us with both backline and good times. Brekky at Sweet Bones is always a must – if you know, you know. We were also super lucky to have our gorgeous friend Charlie fill in on drums during this leg of the tour while Joel was busy working on his calves back in P-town 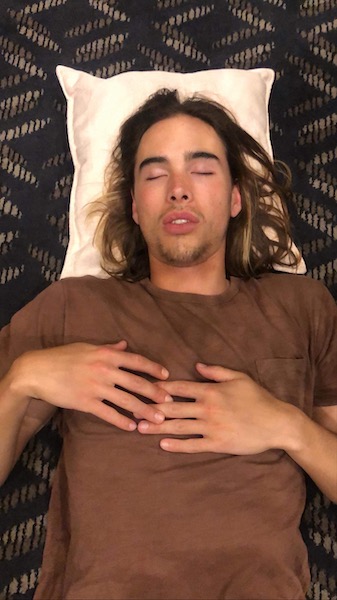 After a rare weekend at home, next up was Coffs Harbour. We flew into Brisbane and picked up some amps from lovely Brissie friends Waax and Semantics, and got on the road for the long drive to Coffs. This leg of the tour was a hard one with all the driving and not a whole lot of sleep but nothing that a berocca and quick floor nap after soundcheck can’t fix. Russell Crowe was at the show which was wild. Don’t think he caught our set but that’s ok, we don’t really like the Rabbitohs anyway. After the show, Joel went straight to bed but Jono, Shea and I accidentally stayed up till 4am polishing off our rider and talking about our feelings. It was sick. 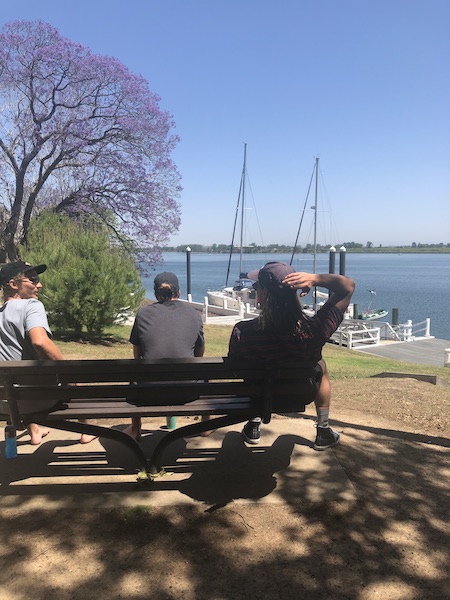 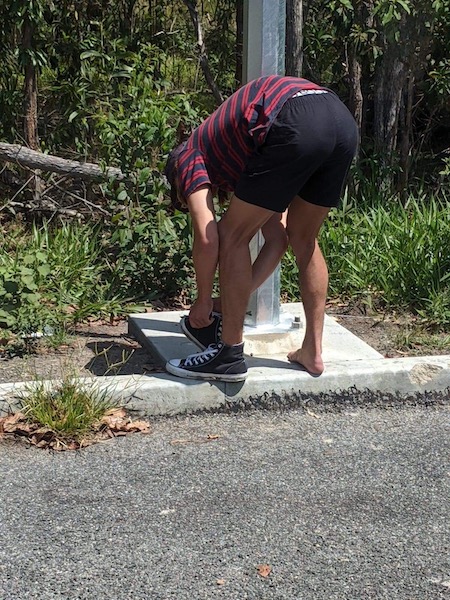 The next morning was filled with all of the regrets. Joel copped the huge drive like an absolute champion while the rest of us nursed our hangovers (give me grape gatorade or give me death). The drive through northern NSW was really beautiful. We stopped off in Ulmarra for a scenic durry by the river ft. a nice bit of flowering jacaranda action and some big old lizard thingos running round like they owned the place. About halfway to the Sunny Coast we stopped off at a rest stop called Little Italy where Shea managed to step in a whole heap of animal poop which gave the van a real lovely scent. Joel gagging at the wheel for the next 15 mins was terrific. At the show that night we did the whole playing music songs thing onstage as always and everything was going great until about halfway through the set Jono was ATTACKED by Amy’s big “AMY” lettering stage props. I was hell worried we’d get kicked off the tour for rocking out so hard that we broke the set, but luckily we didn’t. A true victory for the people. Joel’s dad Steve and brothers Clay and Sam flew over from Perth to catch us at this show which was bloody lovely. It’s always lovely to see friends and fam when we’re out on the road so far from home and Stevo shouting us brekky the next morning was even bloody lovelier. 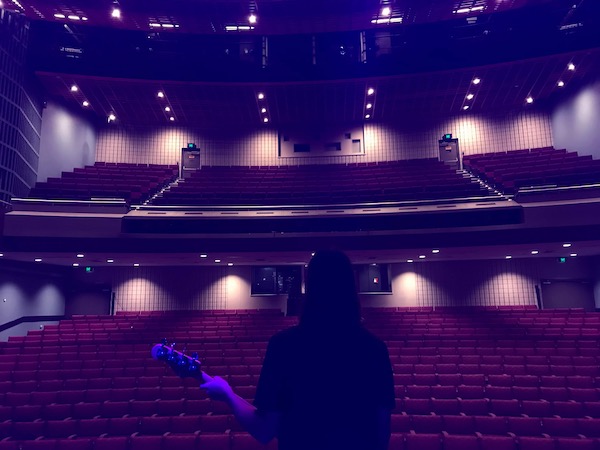 Darwin was wild. Playing up in the Northern Territory’s capital isn’t a very common opportunity for a band like us so we were absolutely stoked to do this trip. When we got to the venue we realised that the 1400 capacity room would be our first ever seated show and to be honest we were hell scared. When we got up onstage the set went great and the crowd were absolute legends. We’ve never been heckled anywhere near that much before and we spent the gaps between all the songs just laughing with the crowd about the weirdness of the whole situation, where they were there in this massive, beautiful fully seated theatre to see a popstar and the opener is some long-haired yahoo punk band from Perth. This one lady kept yelling out asking us where we were staying and we all just kept looking down at our tuners pretending we didn’t hear anything. Highlights included the whole crowd standing up for the last song of our set, and three little girls in the front row yelling out “does the middle one sing?” (talking about Shea) and then continuously asking him to sing for them in between songs for the rest of the set. 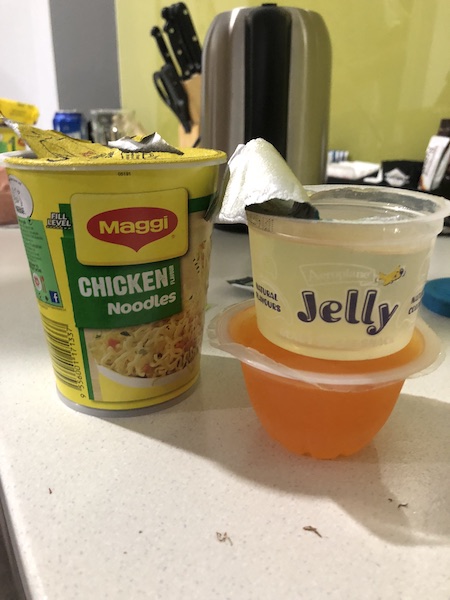 The Victorian leg of the tour was a fun one as we had our mates Dylan and Erik come along to help drive us around and stuff. This was our first time hiring a 12 seater van and lugging around all our amps and drums. The car was packed pretty tight to the point that getting in and out was a bit of an obstacle course type vibe but that’s all part of the fun right? The Wodonga show was a fun time as always and afterwards we went to the servo to grab some dinner and ended up buying their entire stock of 2 minute noodles. I also got some suspicious jelly cups from a vending machine at our motel that were more of a liquid type consistency than any jelly ever should be. Living large. 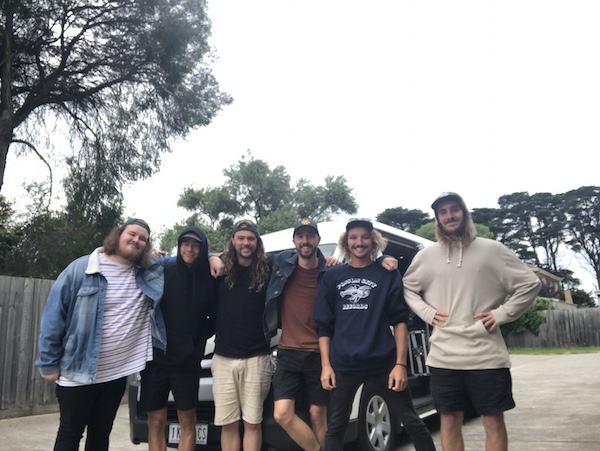 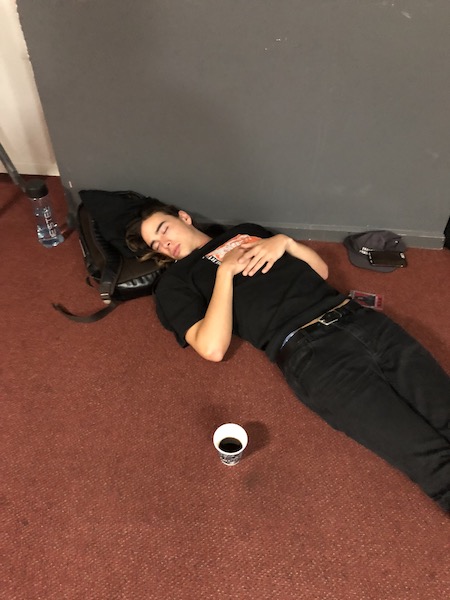 The Geelong show was another fully seated affair at the beautiful Costa Hall. We arrived into town super early for the first time in our lives and instead of having to rush straight to soundcheck, we grabbed a dope feed at a local pub called Murphy’s where they served their beer in beakers instead of jugs. What a time to be alive. After beaker beers we headed to the venue for soundcheck and then Shea hit up the old floor nap again until we woke him up trying to film him. Oopsy. This was Joel’s last night on the Amy Shark tour so we made sure to nab a pic with us and the great lady herself. After the show we drove back to our super suss motel in the Western suburbs of Melbourne and drank some beers in the carpark. 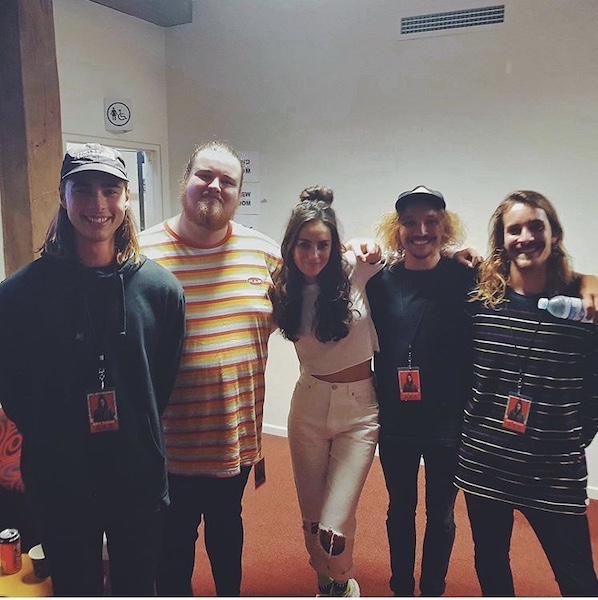 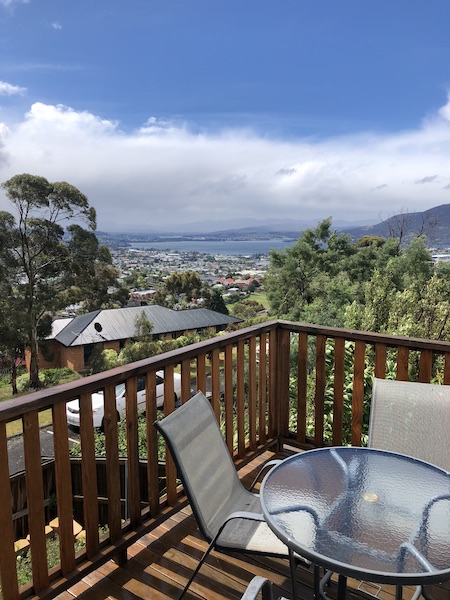 We were so stoked when we found out that this Amy tour was gonna take us to Tassie again. We fell in love with Hobart earlier in the year when we supported Slowly Slowly for two nights at Hobart Brewing Co. and this tour having 3 nights in a row at The Odeon Theatre was an absolute dream. We got a really cool Airbnb up in the hills with amazing views over all of Hobart and we had a hire car this time so we could go see some stuff. A few of us went to MONA on day 3 where we took in some uniquely weird and wonderful art. Special mention to the dude with back tattoo worth 150,000€ who had to sit on a podium all day while people looked at his back. On night one Jono got asked to sign some kid’s forehead which is literally the dream. Night two, Shea rocked some wicked warm-up lunges in our greenroom while our lovely pal and 3rd drummer of the tour, Josh, did his real musician warmup things. He has an app for it and everything! Outrageous. On the third and final night we made sure to get some team pics before we went out onstage to commemorate the end of a really great run of shows. Amy and her crew were so lovely to us and we were so grateful for the opportunity to go out and play our tunes to some different audiences than the ones we’d normally be in front of. Final tour tallies: no. of spring onions that can fit in Shea’s mouth = 21, backstage floor naps = 2, Sly Withers’ drummers = 3, Sly Withers’ drummers saying “I adore you” to Amy for the lols = 1. 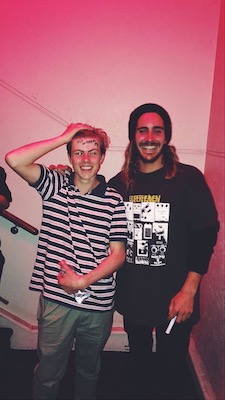 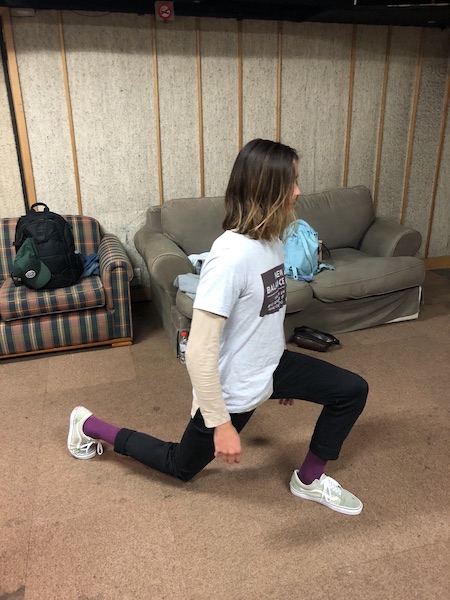 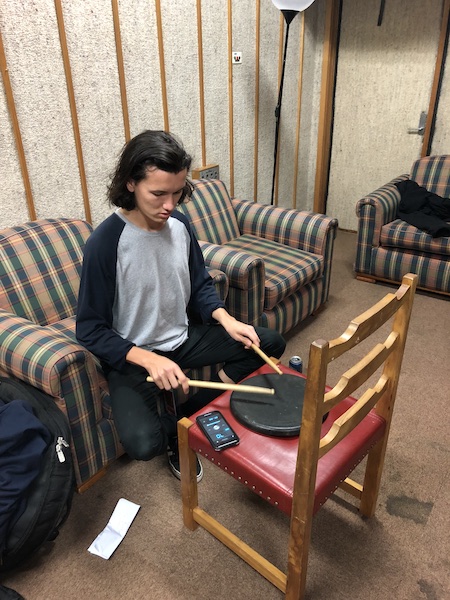