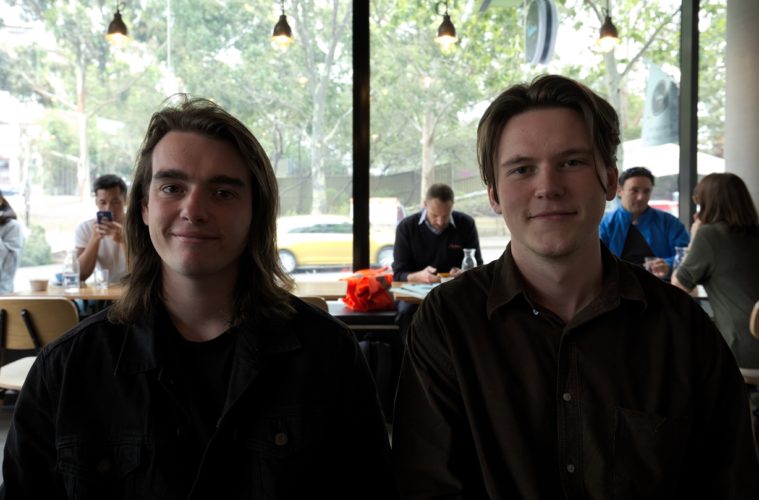 A Conversation with Josh and Michael of Sinclaire Part 1

On the 29th of November I met up with Josh and Michael of Sinclaire.
Due to meeting to discuss Sinclaire, we discussed many Sinclaire-related things.

Ez: And you guys are from the band:

Ez: So tell us a little bit about Sinclaire. The origins and whatnot.

Michael: Yeah. I mean, we don’t really have much of an origin story, but most of us were in a previous band before, and then…

Michael: Yeah. Five Years. So we’ve been friends for ages.

My cousin played keyboard and we started writing stuff for keyboard and… that’s where we are now. We just kind of moved past the old band and decided “Why not just start a new band?”

Ez: So is Sinclaire a very recent thing, or has it been a lot of work going into it before the single and impending E.P.?

Josh: I’d say about like twelve months of work all up.

We were just kind of gearing up to do another E.P. with the previous act, and kind of just – through writing and recording – it just eventually became Sinclaire pretty naturally.

Michael: Yeah, we were writing once a week for about ten weeks with Stevie Knight, and we went in there with the first demos we had which, like Josh Said, were the other E.P. for the other band.

And then we just started trying new things.

We brought this one demo to Stevie, and he was like “That’s your sound. You should do that from now on”. We were like “Okay”. Pretty much that’s how it happened.

We wrote that one and we were like “Ah, this is what we wanna do now”.

Ez: So is there any background behind the name Sinclaire, or is it just a name that was chosen at random, or?

Michael: It was pretty random to be honest. We just like… to be honest I was just going through names I found online and through any means, and basically wrote a big list. Maybe there was like fifteen names on it. Posted it in a group.

Josh: Some taken ones.

Michael: Sinclaire was just in there and I think three of us chose it. In a band when you have three out of five, that’s enough. If you can get three, it’s rare, so we went with that.

It doesn’t really have any meaning. We just like the name, so yeah.

Have you… Pardon my ignorance, but have you guys actually started playing live yet?

Josh: We’ve played heaps of shows with our previous band, but January we’re hitting the stage.

Michael: Practising heaps. Obviously it’s a lot different than…  The genre we were playing before,  just kind of rocked up, we practised once a fortnight, and just…

Michael: Played loud, yeah. No one [would] hear the intricacies in the music.

But now we’re practising like two days a week and trying to write on the third day as well. So we’re all hoping it will pay off in the end.

Ez: Alrighty. So, the single “Headspace”: as I understand it, for lack of a better term, it’s about head-space. Things that run through your mind, things that you go through. Um, how much of it exactly is related to mental health?

Michael: Um, I wrote the song, obviously lyrically. I don’t think it’s about mental health. I don’t ever see myself as being mentally unstable. I think it’s more about critiquing yourself and not being happy with the things you do.

No matter what, even when I’d show my friends early demos of “Headspace”, I’d be happy with it, but I’d always question and be like “I don’t if it’s good, or if it’s something people would vibe”.

Michael: I just didn’t want to make it out to be like it’s about depression, because I feel that you shouldn’t claim that term if someone isn’t actually depressed or has a mental health issue, so I don’t want to give it that skew. It’s not about that. It’s more about  unhealthy, self critique and examining yourself too much.

Whereas looking back on it now I think the song’s good and I get a lot of good feedback about it. People are like “I didn’t know you could sing like that”, or “It’s pretty good”, and it’s reassuring, which is kind of in contrast to the song there. At that point [I] wasn’t assuring myself that this is good.

Melodically it’s a song that is fairly simple. It goes through I think one or maybe two variations and that’s it.

Ez: As you were writing it, did it turn out to be something that was just much more rhythmic in nature and didn’t require any sort of complex use, or was it something that you just kinda forced to just kinda play easier?

Michael: I don’t think it was about it being easy.

Josh: We just kind of heard it and were like “Cool yep, that sounds good”.

Michael: I wrote the chord progression – the original one – and then when we were writing with it, I think we just stuck with that as the backbone of the song.

There’s heaps of songs where you just loop that one chord progression throughout it, and the drums have some interesting stuff going on and the vocals rise and fall a bit and it just kind of felt like that’s how it should be. We didn’t sit down and [go] “Oh, this is too simple”. We just wanted it to be a catchy, fun song. It’s got two little guitar solos and a couple of moments that stand out in there. It just didn’t feel like it needed to change in the progression a lot. We were just happy with it I think.

Josh: Yeah. It’s pretty natural. We wanted it to be… yeah, just to flow well. To focus on the actual song rather than instrumental parts. That’s a big change as well, I think.

Michael: Yeah, we used to focus a lot on the instrumental technicality and being like “Oh this is too generic”. Now it’s like we want it to be a song people will enjoy. Kind of taking  more of a pop direction to it and focusing less on fast playing, or the music being intricate, for lack of a better word.

Ez: For the two solos… when I was listening to the song I kinda noticed they served well as a juxtaposition toward each other based on where on the scale they fall.

Josh: Didn’t really think about it that much. He (Michael) actually wrote the first solo in the intro and I wrote the bridge. So I guess…

Michael: It’s probably like a natural montage, ’cause I played guitar for for ages but it was all metal guitar and I gave up maybe like three or four years ago. So for me guitar’s kind of like hard to get my ideas out. Like I can think of them, but yeah, that solo. I spent like half an hour, an hour writing random shit and ended up with that. I was happy with it…

In terms of the verses and the chorus, I think it just felt natural to…

Because the synth is what likes makes the song kind of bigger and brighter, and the verses are more like moody, and you know, like the lower [form] of my voice. Just felt natural to strip it back a bit.

Lachie does this cool thing on the drums which he wrote. I think it was on the day we were recording it.

Him and Stevie just came up with a part that [was this] cool cymbal grab.

Josh: Just on the arrangements, toward the end of the writing process, even in recording, a lot of the lead parts and stuff like little things like that just came just naturally from us playing what we would normally do, and luckily it worked out and we can play our instruments somewhat.

Ez: Um, now I noticed that with the lyrics, there’s kind of a sense of the romantic in them if you know what I mean. Not so much that they sound like they’re about romance. Obviously they don’t. But there’s kind of like a romantic flow to them where it could be implied.

Now was that an intentional thing or is that natural or am I just reading too much into it?

Michael: I think I wanted… Yeah, there is reference to exterior forces acting on my head-space. I think I just wanted to include it because, like anyone, you always have input from other people in your lives. So yeah, it’s about my own head-space, but I’m taking on people that surround me as well.

I guess it gives it that extra thing where you can take it how you please. If you want to take it in that sense and that’s how you connect to it, then that’s a good thing.

I think that [a] good thing with a song is that you can write a song and it could be about something completely different but someone will take it in their own way and that’s fine.

I don’t think I intentionally did it. I think it just kind of happened that way when I was writing about it.

Josh: Usually when you set out to do things like that, you usually end up with something else.