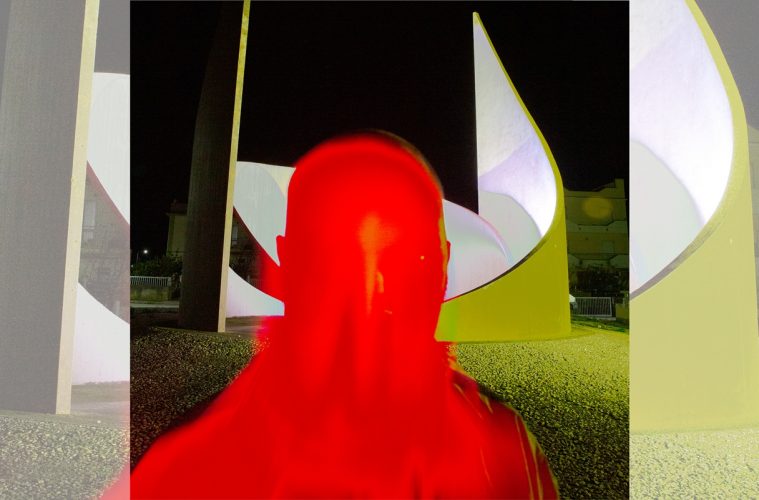 Aesthesis commences with a sudden sharpness. Some sort of scraping and a disembodied, echoing voice creating the idea of a melody follows.  The sounds of words echo out in both a distinct and ambiguous way, almost as though they’re coming from somewhere other than their source. “Intriguing (In The End)” begins mostly as it ends; creating a strong sense of imagery and mood whilst withholding complete clarity.

An exhalation commences “Blaze”, then silence. Another exhale, then more silence. The sound of shimmering swarms around after the exhaling becomes a beat. Shifting sounds underneath scrape and rise up. Eventually a slow procession of steady, plodding and crushing percussion bass comes in, rising and dropping away, forcing itself through the other sounds. This too shifts when it is time and a crystallisation rises from it, following its lining as other sounds fall in and out.

“Elevation” takes on a more spacious approach; Initially singular sounds, then a scattering of percussion and twisted noises. The length of presence shifts rapidly and perhaps violently. There’s a sense of being in a giant wind tunnel, with occasional gales passing through. Rising sharpness finds its way in and holds a prominence, but chooses to lurk rather than take over the forefront.

From here Aesthesis moves toward something feeling less spacious accompanied by clicking percussion. It’s not long before this drops off to make room for stretching noise and precise bass. Then the beat returns proper and all sounds come together to create something disharmonious and rhythmic. Bass then falls over itself as the stretching noise repeatedly tries to surface. Some things decay and fall back whilst the bass and percussion becomes more rapid for a few seconds; then everything comes back. Higher sounds find a way in, then everything floods in and washes away as “Rayleigh Scattering” closes.

“The Foolishness of Human Endeavour” holds more low rumbling in the dark. Something akin to both strings and animal sounds call out, perhaps looking for something. Harsh sounds call back. Things distort and become aggressively pleading. Something begins to approach somewhere in the background. It is high and screeching. The communication between sounds continues, ignoring the screech. It all ends up stopping rather suddenly, as though a conversation has ended.

Precise, controlled ripples repeat themselves. A rising hum comes in to respond. The ripples drop out and the hum takes over. The ripples come back and the dialogue continues, though now met with what sounds like rapid hi-hats. “CRx Aureal” continues this as necessary whilst occasionally adding more sharpness, more mess and more noise. It shifts slowly whilst remaining quite static. A lot of sound drops out, leaving focus on the main conversation before the hum morphs into something else. It ends and a fading wavelet remains.

High-pitched squeals flutter about before “Blasting Super Melt” starts striking at them from underneath. A sudden halt and violent beats take the place of the strikes. Soon the strikes return with greater precision. The squeals disappear. The strikes increase in frequency before once more finding themselves removed. The beat continues on, unmarred by anything; sounds scatter and move around it, seemingly trying to rush toward something. Another shift. Some squeals survived, though they gradually dwindle. As the song approaches its end, some more sounds find themselves removed whilst others find space once more.

Perhaps intentional, “Unflinching” provides an idea of an aftermath. It’s open and desolate. Coiled throbbing sweeps through the emptiness. There is a pause, then the throbbing raises itself into something higher and perhaps more coiled. Short sounds try and find their way in, but are unable to grab a complete foothold; the throbbing continues unchallenged.

“Moby Dick” starts with something massive approaching slowly, yet steadily. It sounds clear, but remains a nebulous force. Mournful, tense, dry and bleak droning fills some of the available space. Brushed sounds come in places as percussion briefly shuffles. Once more a voice returns and once more there is a disconnect. For a moment most sounds relent. In this space more disparate noises from some other place try to sweep in. They repeat and find a bit more of themselves in the ongoing sound as it returns. Everything moves forward until the approaching mass stops. A low flood of static fills and washes much of it all away. Aesthesis ends.

Aesthesis sounds all sorts of abstract, harsh, haunting and thoughtful, but it retains a sense of straightforwardness; As such it feels like a series of sketches. The sounds and atmosphere are clear, but there’s plenty of wiggle room for what images come forward from the music. Whilst sometimes it oversteps, the album does well in holding attention and delivering a complete listening experience.