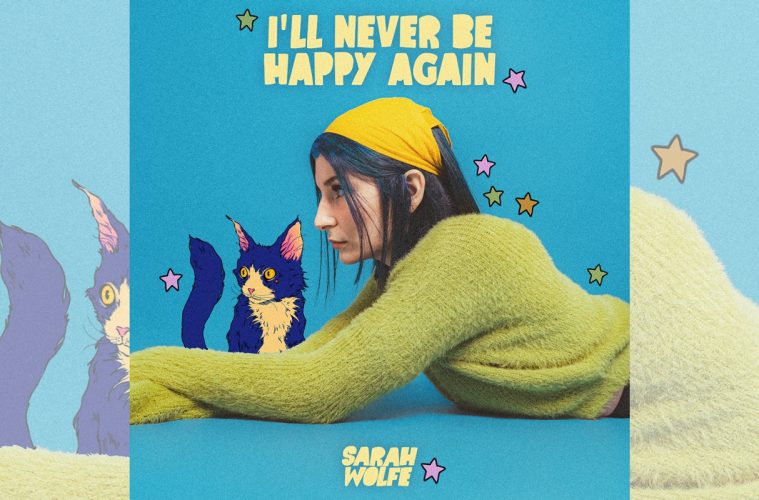 A bit of noise at the start. Its brief appearance makes room for simple guitar, soft vocals, and bass locked in with a steady beat and a clap. A bit of synth comes back in the lead up to the chorus which sees Sarah Wolfe put a lot more oomph in her voice. Some distorted noises as Sarah Wolfe states “Now I’ll never be happy again”.

Come the second verse which, instrumentally changes things around a little whilst following the same melody as the first. Lyrics continue the prior verse and chorus much in the same vein, though with a little more vocal variability. It’s as though the song is pumping itself up; the sound has greater definition at this point, and the beat is stronger and more driving.

The lead up to the second chorus is a little softer, giving a nice breather before the song “explodes” and becomes this really energetic, party-sounding track. There’s a brief pause a bit further on, but otherwise from here on “I’ll Never be Happy Again” is really celebratory-sounding from here on.

A big part of the appeal of “I’ll Never be Happy Again” is that Sarah Wolfe doesn’t keep to a strict vocal melody. Whilst keeping a continuous flow, often she breaks free from what she implies as the expected. At the start she does the soft thing, but early on she pushes away and does a quick rise. It’s the interjection of energy that helps to push away from a very singular performance. Overall it’s variable enough to stay within the realms of the song; whilst a couple of moments feel a bit uncertain, the choice pays off as it gives the song more life.

Whilst gloomy in places, “I’ll Never be Happy Again” is rather upbeat and bubbly. It’s a juxtaposition that works quite well as there’s enough of the upbeat to offset that gloom. Sarah’ Wolfe’s voice gets a great deal of support which helps make her performance shine more. In turn, her voice matches the instrumental melody, helping to enhance the song’s fun. It’s a song well-made and enjoyable.