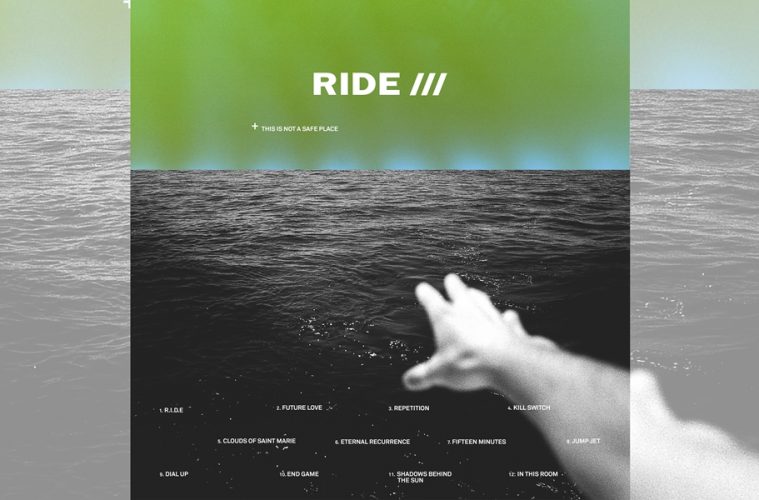 Ride: This is not a Safe Place

Ride are back again.
I found out about their reunion 2015.
I was going into King Kong honten in Osaka and saw a poster promoting them touring. Not sure if the poster was for a tour in Japan.

That has nothing to do with this review, but I felt a need for an opening paragraph. From here on commences the review of This is not a Safe Place, (currently) the newest album from those stalwarts known as Ride.

Probably the best way to describe This is Not a Safe Place is as a rockier album than some from Ride’s past. The shoegaze is still there but the songs are often more direct than on prior releases.

A lot of this comes from Ride sounding as though they were looking to see what they could co-opt whilst still sounding like themselves; The result is that there’s a bit of variance throughout the album without too much branching away from a central style.

“R.I.D.E” is a bombastic introduction that’s full of bravado and energy. Following from there is “Future Love” which is more redolent of Ride’s earlier work without pushing hard on the shoegaze elements.

“Repetition” leans more toward pop, as does “Shadows Behind The Sun” and “Clouds of Saint Marie”. “Eternal Recurrence” embraces a relaxed approach to shoegaze, whereas “Fifteen Minutes” and “Dial Up” (mostly) sound more like stripped down shoegaze. “Kill Switch” and “End Game” adopt a ‘darker’, harder sound than the other songs.

The remaining two, “Jump Jet” and “In This Room”, sort of straddle a line between a few of the other tracks. “Jump Jet” has a harder sound whilst also being more pop-like; “In This Room” embraces the shoegaze elements a bit more whilst alternating between being grand and soft.

This leads to the album’s sound and energy being fairly variable, though more often than not the flow remains smooth. It makes sense for “Future Love” to come after “R.I.D.E” just as much as it does for “Fifteen Minutes” to follow “Eternal Recurrence”. From “Dial Up” to “In This Room” the flow falters slightly. The album goes from being soft and gentle to moody and dramatic, then back to gentle (albeit less soft), then back to dramatic. It would be easy to suggest a slight rearranging, but it’s difficult to imply that that would be an improvement. It’s the same for suggesting removing a track. The flow would be a bit more gentle, but it wouldn’t necessarily make the album better.

However, at the end of the day this is a small blemish on an overall decent album. With This is not a Safe Place, Ride don’t sound like they were looking to play it safe, as it were. Instead they sound free and unburdened by their early history. Their ‘legacy’ probably matters to them somewhat, but it’s not something they’re looking to exhume; rather they’re more willing to explore and recontextualise familiar sounds in direct forms.

Ride took to the songs with a great deal of confidence; not one moment feels uncertain of itself. The music sounds precise without sounding technical; the songs mostly ditch fat whilst focusing on sound, leading a fairly lean and punchy collection. Some moments are weaker than others, but This is not a Safe Place is a satisfying, genuine-sounding album.

This is not a Safe Place is available here.