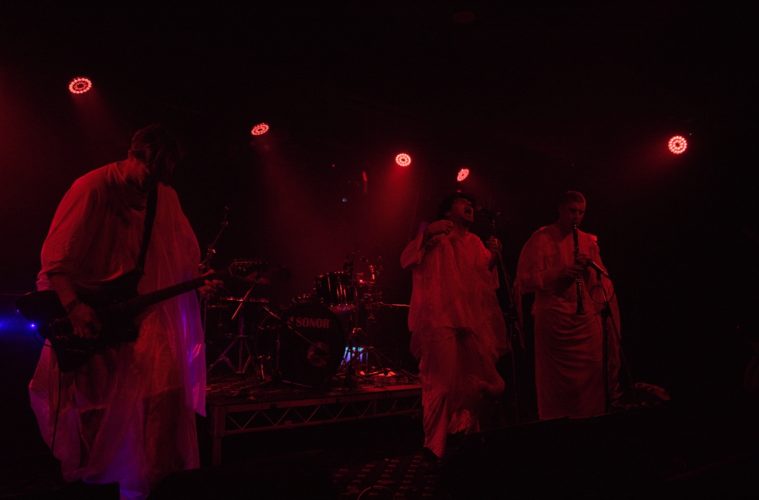 Recently I was afforded the opportunity to ask Omahara some questions regarding Upsilamba.

Ez: Whilst wild and free-sounding in places, Upsilamba also feels measured and quite deliberate. How much of the album is based on improvisation versus pre-composition?

Omahara: The album was a complete composition. There was no improvisation on the album in the true sense of the term. Parts one and two evolved very much like chapters in a book, knitting together an introduction for the concept we were developing. The clarinet had specific ghosts to raise and then allowed us to put them to rest, and the third part is an electronic composition which was written as the final part of the narrative, the evocation.

There was an over riding concept we were working with, an historical narrative, expressed through transcendental ritual. Bound by a strict set of structures. However within the performance of the ritual each individuals transcendence is personal, and I guess due to the intensity and aim of the ritual, it may sound improvised in parts.

Ez: In my experiencing Upsilamba I felt it offered “a highly human experience“. Were you looking to explore and express something human?

Omahara: I guess it became human, beginning as a musical foetus, it developed characteristics from the DNA of all three of us. By approaching the project as a ritualised performance, it allowed us to impress our individual desires into a collective exertion of organised chaos. All intentions for the ritual were based around the exorcising of past hurt driven by human cruelty.

Ez: Was there anything else you were looking to get across? If so, how important do you feel it is that that something is picked up on by listeners?

Omahara: There are deeply personal motives I think for each of us. However I don’t think the specifics are important for the individual listener. I guess if you think about watching a ritual, you tend to pick up on the general feeling and mood through the expression and gestures of each individual. I think this is how Upsilamba works; if you’re going our way, then chances are we shall meet at some point.

Ez: Despite the album being split into three parts and an interlude, is it meant to be taken as one piece? If so, how did you decide where and how each part would begin and end?

Omahara: No it was never meant to be one piece. Its a narrative expressed through a ritualised vehicle. Each part had been written to specifically lead us through to the next stage. The clarinet melody used in the intro for example, was used to lead us back into a confrontational past, which we annihilated in order to move forward. The reason for the interlude etc is due to one of the elements we were looking at for presenting a ritualised performance, which was cabaret.

Ez: The vocals that appear are used in what feels like a non-traditional manner. In what way do the vocals add to the music?

Omahara: The vocals referred to as the numbers are actually dates. The delivery of the numbers conjures the historical cruelty and aggression hiding behind each one. The priestly conjuration is a mantra formed from a line of poetry which I wanted to inflame as a chant for change. And the tortured screaming is representative of our final evocation; that of a new self. We were evicting parts of ourselves we no longer wanted, however expressing the pain and difficulty we had to go through to accomplish that desire. As for adding to the music, I think it’s all one and the same thing.

Ez: The use of clarinet on Upsilamba makes for a surprising, though welcome inclusion. Considering the music’s surface sound, what was the thinking behind using clarinet and how did it affect the music?

Omahara: Well to be honest, it went literally like this:

What attracted us to Dominic – our clarinet player, was his demeanour. It didn’t actually matter what instrument he would have played, it was more about him as a person, and how we thought his character would contribute to the concept.

Ez: Did you ever have any concerns about how well Upsilamba would come together as a piece?

Omahara: No, we were never concerned. Maybe it never did come together!

Ez: What was it about the album’s creation that led to you realising that it was complete?

Omahara: Exhaustion and success in the evocation.

Ez: Toward the end of 2019 you also released a live version of Upsilamba. In what ways does the live performance of Upsilamba shift and contrast against the first released version?

Omahara: Upsilamba was always planned as a performative ritual. The recorded version was part of the process of mapping out the final presentation. Essentially the live album is purely a documentation of a ritualised performance. To be present in the space is actually the only way to truly experience or witness the essence of what we were attempting to achieve.

Ez: Do you feel as though both released variants should be heard together? If so, why?

Omahara: No, certainly not, It’s an individual thing and depends on what a listener is looking for in their musical experience.

Ez: Thank you for your time, as well as the music. I hope people keep exploring Upsilamba and that you’re able to stay safe.