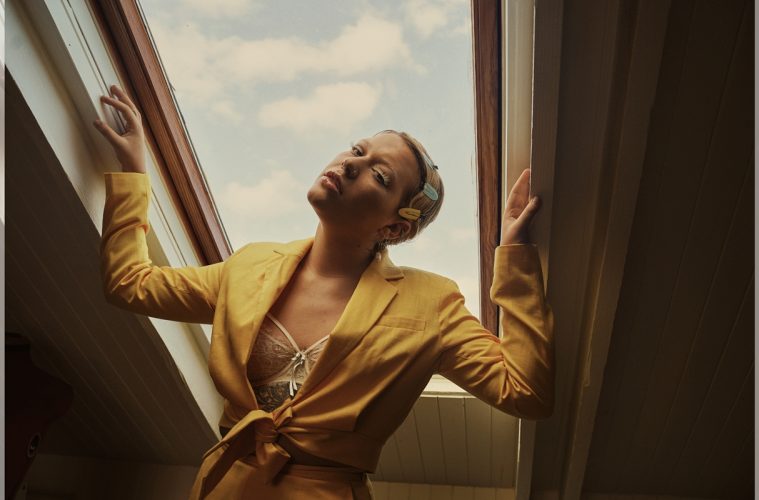 Recently Aya Yves released “Dear E.”, a song that deals with a personal subject matter, so I asked her a few questions about it.

My understanding is that “Dear E.” talks about some rather personal stuff for you. What is it that you felt made this stuff work best expressed through song format?

Aya: Yeah, it’s a pretty heavy subject. Honestly, it kind of just fell out- I didn’t plan to write the song, it all just lined up and it had to be written. That being said, I use song writing as a tool to help me move through my emotions, it’s great for emotional release.

Ez: In what way do you feel the instrumentation helps deliver what you’re expressing?

Aya: Well the instrumentation sets the scene, it’s how the song started when LANKS and I were writing together. We started with some vocal drones, which are quite emotional already without having to do much to them. He added in some soft percussion, and the song started forming.

When Xavier (Dunn) started producing the track it was really important to me that we kept those key elements in the song as I felt they were imperative to the storytelling. I wanted the song to feel like a beautiful day that was ending too quickly. It’s sad, but it’s hopeful.

To bring it back around, the instrumentation is so integral to the message you deliver. Most people listen to the ‘soundscape’ before anything else, it really makes the call as to where you’re going with the mood.

Ez: When you were recording “Dear E.”, considering the personal nature of it, was there any hesitation regarding finishing it off and releasing it?

Aya: Every step of the way.

When I was recording it with Xav, I had to find a balance of being emotional and being able to sing through without crying. If I thought too much about it I’d get choked up and couldn’t get through the song. If I didn’t tap into my heartbreak, it wouldn’t be doing it justice- so that was really challenging to find a happy medium. I delayed the release a couple of times, swapped out the order with ‘Smart Girls’. We were going to film a music video for it too, but a week before filming I couldn’t bring myself to do it, to ‘act’ the song. So I cancelled the shoot.

When it came to release day, I was terrified. This is the most vulnerable piece of art I’ve put out into the world, it felt like I was jumping off a cliff and hoping there’d be someone to catch me at the bottom- which is why I knew it was important to release it. I love making all kinds of music, but I always want my music to make people feel something- and Dear E. makes me feel a whole lot.

Ez: Is what you were talking about in the song something that you feel you’ll explore more, or do you feel the song is quite definitive in what you covered?

Ez: Lastly, is the reception you’ve received toward the song what you hoped it would be?

Aya: Yeah, it’s been really beautiful. It’s opened up a lot of conversations with people moving through their grief, which has been honestly a bit of an honour that people are feeling safe to be vulnerable. I’m so grateful I could create something that helps people feel what they need to.

Ez: Thank you for your time Aya. I hope your day is a content one.