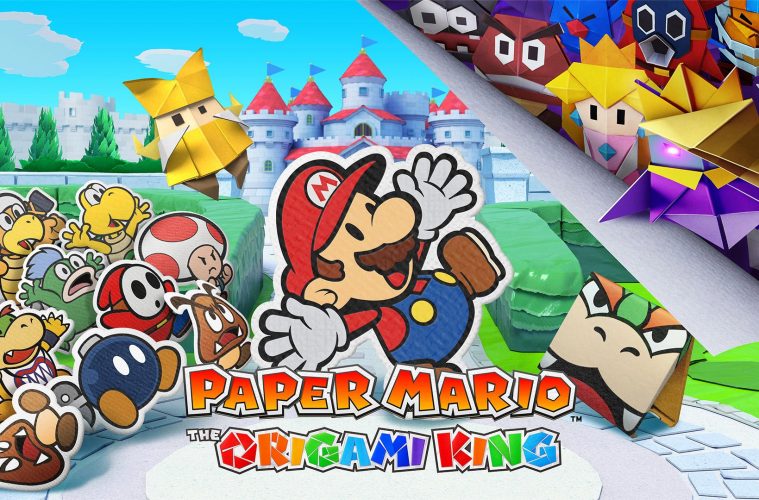 Oi, so…have you ever walked into the stationary section at your local Officeworks and just wanted to beat the fucking shit out of it? If so, boy do I have the game of your dreams right here!

Paper Mario: The Origami King is the latest installment in the Paper Mario series. The PM games have always been cut from a different cloth; not just from other Mario games, but games in general. Origami King is no exception; its addition to the series is truly a distillation and refinement of all the best bits of the previous PM games!

The story is essentially standard Mario-fare; Peach in trouble, Mario must save. The enemy here isn’t so standard though. It’s not Bowser who has taken Princess Peach; Rather, it’s Ollie, the Origami King whose burning hatred for unfolded paper drives the PMOK narrative. King Ollie is on a mission to turn ALL paper into origami, and he has started with the princess and her castle – which has been entangled in paper streamers. Mario, assisted by Ollie’s much friendlier sister, Olivia – who gives Mario access to different game mechanics that assist with both environmental puzzles and combat (most notably used, the 1000 Fold Arms technique) – must unravel the streamers in order reach the castle and save Peach! It’s very cute!

The character and set designs are amazing. The paper-crafted scenery is deceptively simplistic, but often hides hidden pathways and treasures. An element Origami King retains from previous games in the series, is the need to be constantly alert for the small clues in the environments that give away these hidden gems. Why is the corner of that wall hanging down? Why is there a randomly square tile in the middle of this floor? These minute discrepancies in the level design will always lead to something –  if spotted – but often require an eagle eye and are so easily missed! 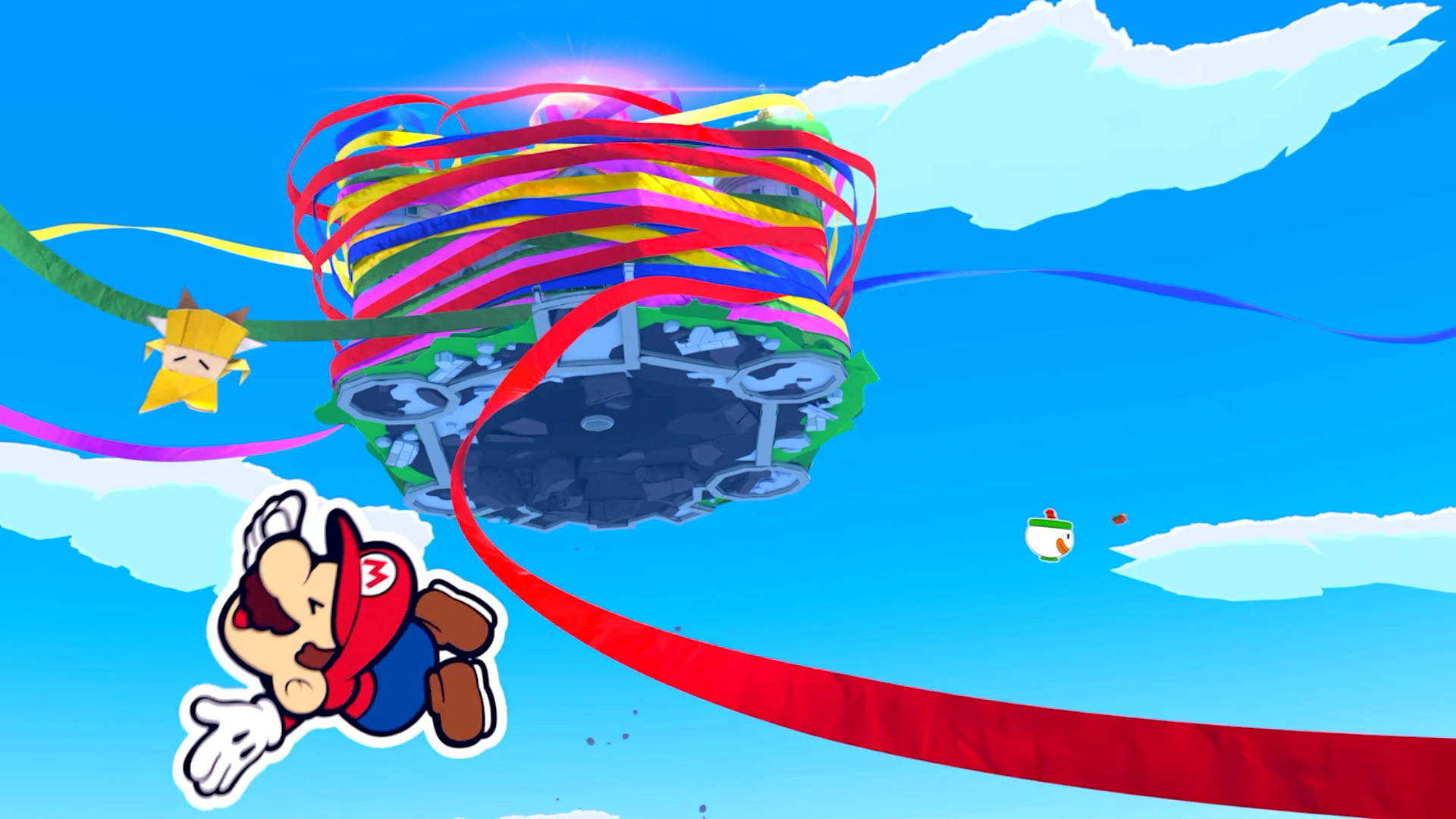 The game has tools that help players find as many secrets as possible in the form of cute little bells that you can purchase as the game progresses. These bells ring when a secret is nearby, BUT there is a different bell for different types of secrets (hidden block, treasure chests, hidden Toads) and only one can be equipped at a time. The bells are a great mechanic for players looking to nab 100% of the secrets as whilst they provide an indication something is nearby, you still need to do the search yourself. There were some parts in the game where that lil’ bell was ringing and I just COULD NOT find whatever hidden secret it was trying to alert me to.

Okay: the combat. The battle system in this game has been shit-talked a TON, and yeah – it’s a bit ‘how ya going’ – but definitely not un-fun. The standard battles that result from generic encounters suffer from the same issue many RPGs suffer from; they get repetitive and boring really quickly. On top of this repetitiveness, a bigger issue with the puzzle-based combat was the increases in difficulty. It felt like the puzzles jumped from being reasonably solvable to extremely tricky and had me feeling very Zero IQ by the final levels. As with hidden treasures, Origami King has various tools to assist with the combat; the most useful being spending coins to have the puzzle solved (which places enemies in optimal positions for your attack). By the end of the game I was using this tool on almost every battle.

The boss battles do well to avoid the tedium of standard encounters; Not only by changing up the function of the ring-puzzle to serve specific attacks for each boss, but also just in their presentation. The entirety of Origami King has some amazingly funny (and dark!) writing, but these bosses are just next level! Each boss is a piece of stationary. You literally fight; a box of coloured pencils, a hole punch, a pair of scissors – you know, the natural enemies of paper! – and each boss has amazingly punny battle dialogue which had me in stitches and made the battles so enjoyable! Aside from the office-supply based bosses, Mario also faces off with various ‘Vellumentals’ who each give him a new elemental power. While the Vellumental boss battles don’t offer the same LOLs, they do utilise a different combat system to standard encounters which is much more enjoyable. 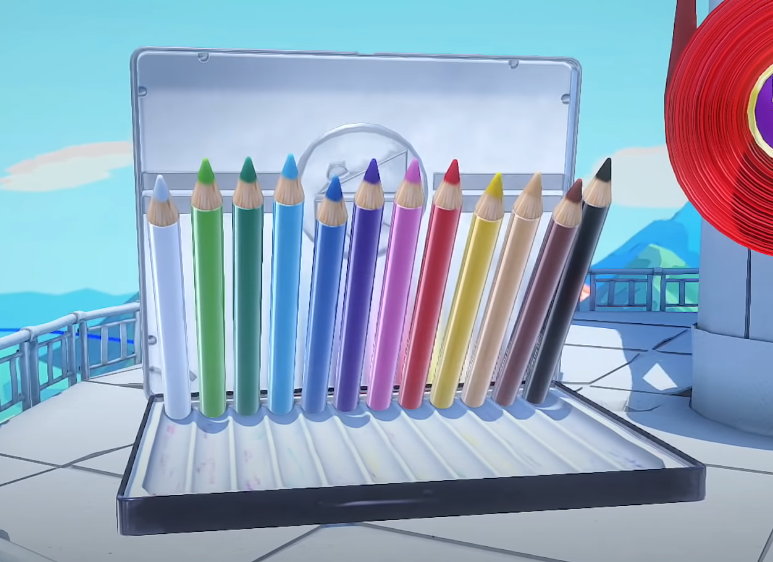 Outside of the combat and narrative elements, Origami King also contains a significant chunk of optional exploration that can be very rewarding. You can return to each visited area with new tools to discover new treats! Players can collect statues and other goodies and view them in the Toad Town Musée Champignon – which didn’t seem so exciting at first, but feels extremely rewarding as your collection grows and the shelves fill with all your discoveries!

Origami King has got to be the best Paper Mario game since Thousand Year Door. For me it surpasses TYD in leaps and bounds. The tone of the game swings from darkly irreverent to just plain ridiculous (but in the best way) throughout, making things fun and enjoyable on a level completely unrelated to the gameplay. I found that the flat-out quirkiness of the games’ tone was more than enough to make up for the clunky standard encounter combat – which is honestly the only negative aspect of the game in my experience.

There’s been some twitter-chatter suggesting that Origami King might be the last in the Paper Mario series. I really hope this isn’t true. The game shows that there is plenty of room for innovation in the series and it would be awesome to see its ideas further explored in a future title.