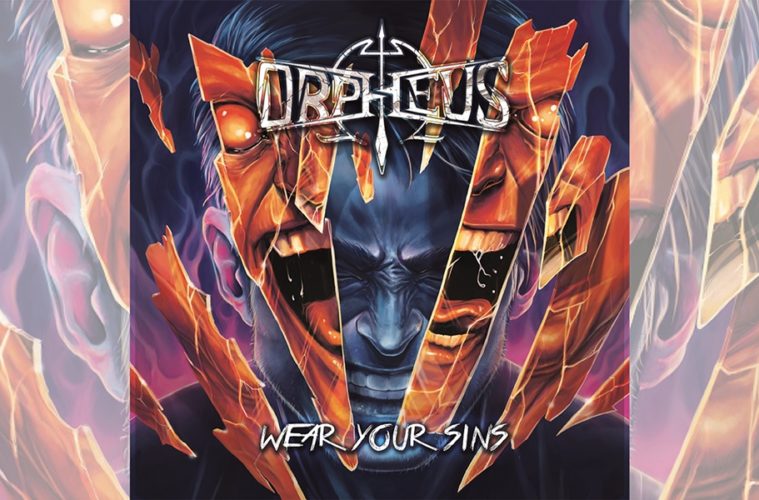 Orpheus Omega are a band of musicians.
An album by the name if Wear Your Sins they have released.

Almost from the get-go Orpheus Omega overtly tell you what to expect. On “Lighthouse” the band aren’t looking to lull you in or let you prepare much. The song has a semi-bombastic intro, then gets into its meat. From there the album proceeds to go through some tight grooves, expected riffs, screamed vocals, and so on and so forth.

Sometimes there’s a bit of variation; “Swim in the Black”‘s slower, more melodic pace could fit well on a videogame tribute album, and “Wear Your Sins” pushes the big anthem angle hard whilst playing around a bit with drum patterns and a mid to slow pace. Outside of a few other songs, Wear Your Sins maintains a pretty fast and tight pace throughout its run time.

Almost everything about Wear Your Sins sounds trite and surface. Every processed vocal comes off as expected and manages to sap all weight and impact out of itself. They sound like Orpheus Omega were aiming for something really heartfelt, but instead they’re just flat. The effects get distracting and suck all of the emotive quality out of them. To be fair, the way the clean vocals are gels with the songs, but it’s clear that they would have worked better with a strong, naked vocal performance.

Orpheus Omega do show a lot of talent regarding each member’s requirements. Everyone understands how to play with a modicum of complexity and knows what will work over a beat. The whole performance sounds tight but it also feels very piecemeal and manufactured rather than something natural. Wear Your Sins could have really benefited from doing as much of this live together as possible. If Orpheus Omega did, then it’s a significant issue that the album sounds like they didn’t.

On top of all of this, it is apparent that Orpheus Omega are trying to be a polished gritty band. So many of the songs have the notion of an aggressive tone but due to both the polish and ridiculously loud mix / master, Wear Your Sins sounds sterile and flat. Wear Your Sins only stood to benefit from having a quieter, significantly more breathing mix / master. The issues wouldn’t have disappeared, but they would have been significantly less overt than as in your face as they are now.

It’s almost as though Orpheus Omega went “Here’s our hand. Here’s all of it”, dumped their cards on the table and then walked out of the room. There isn’t necessarily anything wrong with such an action, but the band display that they don’t have the ability to pull that off. There’s a lot of time spent leaning heavily on well-worn melodies with no time spent playing around with them. Instead of getting something resembling a payoff, you’re often getting a cheap melodic hook that loses power over time.

It’s clear that Orpheus Omega sound as though they’re trying to write “moving” music and want to make you feel things, but they miss the mark because they’re not interested in doing it in any way other than sticking to just about everything you’ve heard before. Whilst some lines are quite interesting, often the lyrics sound like they were written by someone who doesn’t want to grow as a person. Orpheus Omega clearly know how to work as a unit, but they don’t sound like they’re performing as a unit. Emotional content, energy and dynamics are implied, but the overall sound prevents those from coming through. Wore often than not Wear Your Sins sounds like an underdeveloped derivative of the work of better bands.

I can’t fault Orpheus Omega for their talent; they are a talented band. Likewise, Wear Your Sins can’t be faulted for being fun, as it certainly is. The songs will likely work well live and in a sense the album works nice enough as a teaser for the songs in a live setting. That said, is this really the best they could do?

Wear Your Sins is available here.