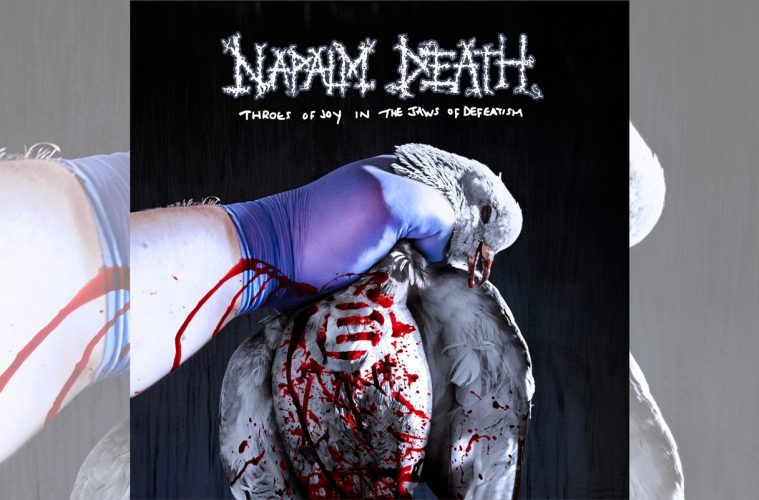 Napalm Death: Throes of Joy in the Jaws of Defeatism

Since somewhere around Words From the Exit Wound and Enemy of the Music Business Napalm Death have developed and furthered a particular sound. They’re a band that always have sounded like themselves, even during their run with particular sounds during the nineties; However, at a point they found a new sense of footing and have run with it ever since. This said, their desire to experiment whilst refining has remained.

Often it seems that said desire is necessary for the intensity of their music rather than a forced requirement. Napalm Death are a rather blunt band. However, if they didn’t further themselves, then much of that bluntness would eventually lose its impact. As such, whilst many of the albums from Wound / Business onward sound similar, they also have a bit of variation to them; something of which continues on Throes of Joy in the Jaws of Defeatism.

Throes Of Joy In The Jaws Of Defeatism starts muted before quite quickly launching properly into “Fuck The Factoid”, a song quite familiar with Napalm Death’s more recent oeuvre. That said, it seems knottier, more “chaotic” and has no problem going for more straightforward, stretched out stuff during the “choruses”. Rather than stick to just this, the song throws in a sort of ominous, menacing groove at the end. There’s a fair bit of groove on this album so upon repeat listens the inclusion here makes a bit more sense.

“Backlash Just Because” follows in a slower vein, though with more groove and less angularity. As it progresses it shifts around whilst maintaining a sense of steadiness. “That Curse of Being in Thrall” feels unable to sit down and plays with overload / underload in the percussion whilst the other instruments hammer away. However, once more eventually the Napalm Death go for the groove, though not without what feels like an anthemic call and response toward the end.

“Contagion” is more “mid-paced” stuff with a nice bounce to it, though the choruses go for more of a haunting feel, coming off as an atmospheric counterpoint. Eventually the song shifts away from these and takes on a pummeling, sort of avant-garde approach for a bit before including one more chorus. It’s a great section to include, but after enough repeats it feels like padding.

On “Joie De Ne Pas Vivre” atmosphere comes forward once more. It’s a colder, more reverb-filled song that feels off and at times uncomfortable in a way the rest of the album doesn’t. “Invigorating Clutch” sort of continues on, though with less room. The introduction draws long and broods with menace. Eventually it kicks into a doomy, sort of post-punk groove, pushing atmosphere in a different manner.

The following “Zero Gravitas Chamber” returns to more familiar territory and sees Napalm Death blast their way through heavy riffs at first. There are a few shifts throughout, with some sections feeling more connected than others. “Fluxing of the Muscle” returns to more groove, but it’s also really angular. Eventually it enters this sort of spacey, martial-like rhythm before finding groove once more.

Up to this point Throes Of Joy In The Jaws of Defeatism has been playing around a lot. Sometimes it feels as though the band is just kind of throwing things together. Maybe it’s an attempt at disorientation; maybe it’s not, but in terms of individual sections, everything works. When put together, some parts feel awkward and arbitrary, but overall the album thus far is tight, and meaningful. The vocals remain consistent in making sure the words get the force they need, the instruments match that force and really build on the intensity; everything gets all the gusto and implied freneticism you’d expect from Napalm Death. It’s pretty full on, though Napalm Death never have been one to mince words. This all said, “Amoral” is probably the most straightforward and lightest any of the album gets.

“Amoral” is a song where Napalm Death firmly embracing the Killing Joke influence in their music. Cold riffage and appreciable melody with a sense of the bleak, though also a strong sense of trying to reach out. The song is blunt and direct; Not making it this wiry tangling of notes allows the song to hit in a different way. It’s a simply song, though also difficult as whilst it’s effective, it feels both too beholden to influence and firmly Napalm Death. It’s solid but it sits in an odd space.

For “Throes of Joy in the Jaws of Defeatism” the commencement is (relatively) more subdued: Screaming / grunting in what sounds like a muffled room. From there it’s a grindfest with more angular knotting and abrasive textures that build atmosphere. “Acting in Gouged Faith” pushes more on knotty grooves and tension, though of course once more goes into a shift. The shift leads to what feels like a of dismantling of the groove, then biting, blistering aggression returns.

“A Bellyful of Salt and Spleen” feels like a progression of a particular style Napalm Death pursue on specific songs. It’s a slow(ish) grinding, cold, monolithic dirge, with chant-like vocals and intense imagery. Synth sounds shimmer bleakly whilst the vocals continued their detached, disembodied calling. It seems as though the song is going to wind down for a moment; It then picks back up, almost feeling like a rallying cry. Eventually it ends on what feels like a twisted melodic section, almost calm, at ease, peaceful and accepting. Great ending to the album really.

In a lot of ways Throes Of Joy In The Jaws Of Defeatism sounds spontaneous. Perhaps free-form; at least, more so than previous albums. A lot of this comes from the segmented, multi-faceted approach to the songs. Each section is tight, but some don’t connect well with each other. At times some songs feel like they run too long, though that has more to do with how much shifting there is than it does overplaying sections. This said, the album is good. It’s Napalm Death refusing to rest on their laurels to get their message across. Their approach here might need further refinement, but it’s effective.

Throes Of Joy In The Jaws Of Defeatism is available here.