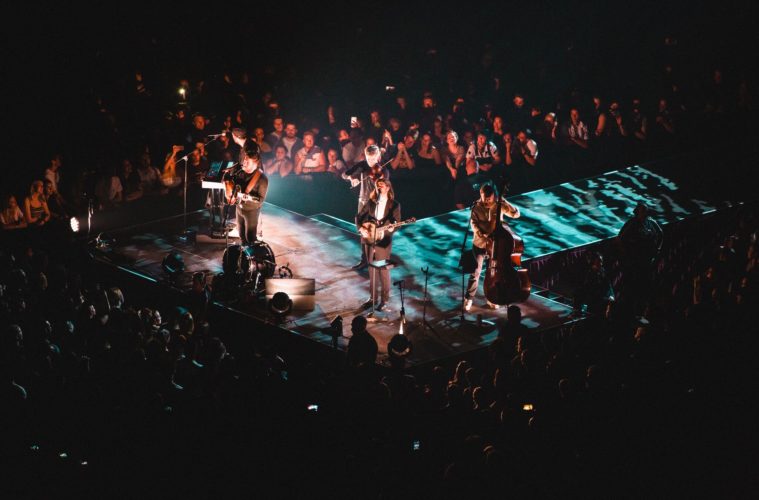 Mumford & Sons have typically been known as “The band with the banjo guys, right?” and while that’s not necessarily wrong, they’re definitely more than that. Smashing into the charts with “Little Lion Man” in 2009, they’ve since released four albums and had successful tours around the world. Currently touring off the back of their fourth studio album, Delta, Mumford & Sons have dates around Australia this January and kicked off the tour in Brisbane at the Entertainment Centre, followed by Sydney’s Qudos Bank Arena.

Mumford & Sons know how to fill a room. Their show at Qudos Bank sold out and they were really able to play to a room of that size. Instead of their folksy roots sound, the last two albums brought the sounds of a full drum kit, electric guitars and bass guitar, leading to a bigger rock sound.

Opening the show with “42”, the band electrified the room with Mumford taking the runway to sing and drum. The four band members then took to the front of the runway and jumped straight into “Little Lion Man”, encouraging the crowd to sing through the chorus that shot them to fame ten years ago. An arena full of people singing back to the band was clearly a highlight for them too; They grinned through the final chorus and into the next song, “Babel”.

A personal highlight was “Lover of the Light”; a fairly dramatic song that rises and falls beautifully, and plays incredibly well in a stadium. Mumford hopped behind the drums. His bandmates lined up on the stage in front of him, filling the room with the bright tones and joy of the song. Mumford’s skill of drumming and singing never fails to impress me, and the energy that he gives off while behind the drums for “Lover of the Light” is always phenomenal.

The next few songs were a mix from their last two albums; all of which played very well to the crowd. During “Believe” – a single from “Wilder Mind” – the audience pulled out their phones and lit their flashlights. The whole arena lit up with a warm glow as the band performed, giving a real sense of community.

A real highlight for the audience was “Ditmas”, with Mumford taking the chance to jump into the crowd and perform. He walked through the floor and up to the back of the first row of seating; the audience clamouring to take photos and take his hand. While Mumford was in the crowd the band played on, the electric guitar soaring through the room and the harmonies echoing. Sweaty and grinning, Mumford made his way back through the floor’s crowd, hands reaching left and right. He was clearly having the time of his life.

Mumford & Sons played three more songs before wrapping up and leaving the stage to the audience’s cheers and screams. After a few minutes they returned and gathered around one mic at the front of the runway. Mumford essentially told the audience to shut the fuck up and performed “Timshel”.

“Timshel” is filled with Shakespearean style poetry for lyrics and a four part harmony that’s to die for. To have heard it around one mic in a stadium is what one would call an out of body experience. They performed “Cold Arms” in the same way, the harmonies from the chorus filling the room.

The show was wrapped up with a mix of new and old, with “Delta” ending the show. It was absolutely spectacular. Watching Mumford & Sons grow from the band that came on the Hottest 100 to accept Number 1 for “Little Lion Man“ ten years ago to playing colossal arenas around Australia and New Zealand has been a joy. They constantly grow and develop their sound, and their shows to match. They are a band that has mastered not only the folk roots they came from but continue to push their music in new directions. Their live shows remain a joy to attend. Fans love hearing the band as much as they love to play. Mumford & Sons are a band who embrace their potential, and we can only look forward to what’s to come.