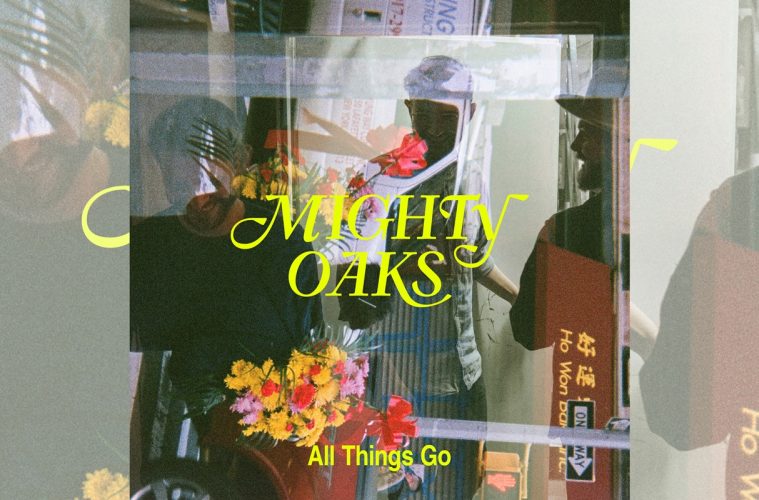 The album relies heavily verse / chorus / verse structures with occasional bridges thrown in for good measure. Whilst it gives the album a sense of familiarity, it feels like a bit of a crutch. It’s mostly fine when it comes to flow, but overall it has a habit of undermining the lyrical content; especially when there’s likely another big chorus right around the corner that the songs seem like they’re trying to rush to after each twee verse.

It’s a shame as there’s some touching moments found throughout All Things Go. If Mighty Oaks moved away from the structure they use a bit more, then many of the ideas and moods they’re looking to convey would travel far better. Themes on loss, love and (seemingly) indifference among others would come through with greater resonance. As it is, it seems as though those themes often find themselves behind a semi-permeable wall.

But of course this says little about the lyrics themselves which often work well with the music underneath. A lot of it has to do with their simplicity; Just about every line is direct in expressing overall meaning for any given song. It’s difficult to misread lines such as “The rich get rich / The poor get poor / And people only care what’s outside their front door” as it’s all about getting straight to the point. Leaving stuff wide open for interpretation wouldn’t suit the songs here; it’s good that the band kept things clear and concise when necessary.

The vocal performances carry the words well and go a long way in giving them a sense of prominence. During verses often the words are more soft and gentle. When it comes to choruses, the vocals often make the words soar right above what came before. Sometimes when the choruses are more gentle the vocals will also drop a little, but still hold a lot of power. It’s a strong performance that needed less reverb but otherwise is the album’s highlight.

As far as instrumentation goes, the performances are nothing dazzling which is beneficial enough for the album. There’s no jumping out and taking over; it’s all locking down on a central point as a collective whole. Gentle playing seems to guide the songs, though there’s plenty of room for something with a bit more punch.

So here’s the thing: Everything on All Things Go works. Everything makes sense. Everything has a place it neatly slots into. However, there’s a lingering sense that the band could be challenging themselves so much more than they do here. There are some great ideas, but often the album feels like its pushing those aside for big chorus appeal, and most of the album feels like listening to a product.

I have a feeling that that’s not what Mighty Oaks aimed for. There’s too much intent for meaning in the songs, but it doesn’t quite carry forward. There also are some great songs on the album; The title track benefits by coming early and being rather touching, and “What You Got” makes for a fun little pop ditty with a great bounce and energy to it. “Kids” expresses a sense of sombreness without bogging itself down, instead finding a sense of balance which helps bring forward what it’s looking to convey.

These songs play into Mighty Oaks’ strengths as a group in one way or another; The rest mostly don’t.

I find it difficult to not recommend All Things Go as it isn’t necessarily bad; it’s enjoyable and put together well enough, but it often falls short of the mark.